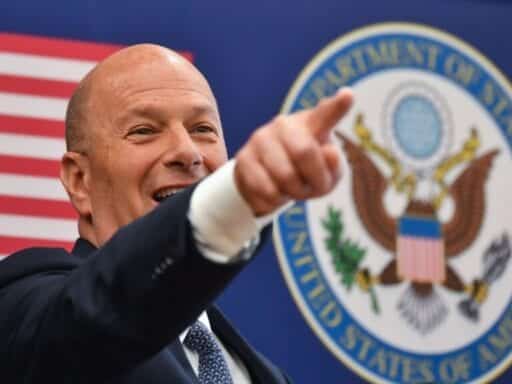 Ambassador Gordon Sondland was part of a text chain in which a diplomat wrote, “I think it’s crazy to withhold security assistance for help with a political campaign.”

Gordon Sondland, the US ambassador to the European Union and a critical figure in the Trump-Ukraine controversy, was set to testify before Congress Tuesday — but hours before that testimony was to begin, the Trump administration canceled it.

“Ambassador Sondland is profoundly disappointed that he will not be able to testify today,” Sondland’s lawyer, Robert Luskin, said in a statement. “Ambassador Sondland believes strongly that he acted at all times in the best interests of the United States, and he stands ready to answer the committee’s questions fully and truthfully.”

That order seemingly came straight from the top: Shortly after Sondland’s lawyer announced the State Department had forbidden his client from attending the closed-door session with House Democrats, President Donald Trump confirmed he did not want Sondland to testify. He blamed Democrats for the decision, writing on Twitter he would have allowed it if he thought the process was fair.

I would love to send Ambassador Sondland, a really good man and great American, to testify, but unfortunately he would be testifying before a totally compromised kangaroo court, where Republican’s rights have been taken away, and true facts are not allowed out for the public….

House Democrats became interested in Sondland as part of their impeachment inquiry due to his interactions with other diplomats in which he may have discussed trading a Ukrainian investigation into Joe Biden and Hunter Biden for, first, a meeting between Presidents Volodymyr Zelensky and Donald Trump, and later, congressionally approved military aid.

These conversations came to light after House Democrats released selected text messages from former special representative to Ukraine Kurt Volker shared with them during his testimony Thursday.

House lawmakers planning to interview Sondland likely hoped to gain more insight into these texts, particularly messages in which another diplomat appeared to suggest the Trump administration was directly involved in a damning quid pro quo, before Sondland denied that was the case — and moved the conversation to the phone. It now seems they will not get the chance.

While other State Department officials, like Secretary of State Mike Pompeo, have rejected cooperating with the impeachment inquiry — even responding to subpoenas with defiance — Sondland had been willing to at least take questions. Whether he will be allowed to remains to be seen. His lawyer wrote in his statement, “As the sitting U.S. Ambassador to the EU and employee of the State Department, Ambassador Sondland is required to follow the Department’s direction.”

What comes next isn’t entirely clear. The leaders of the impeachment inquiry have been dogged in their quest for information thus far, sending subpoenas to Rudy Giuliani, and even the White House itself. The administration, however, seems equally determined to give as little information as possible in response.

Gordon Sondland is a Trump ally, who may have direct knowledge of whether the Ukrainian scandal included direct quid pro quo

As the US ambassador to the European Union, Sondland wouldn’t seem a likely candidate to be involved with Ukraine, given that nation is not in the EU. However, NPR reports the ambassador told a Ukrainian news outlet early this year that he had inserted himself into US-Ukraine relations: “We have what are called the three amigos. And the three amigos are Secretary [Rick] Perry, again, Ambassador Volker, and myself. And we’ve been tasked with sort of overseeing the Ukraine-US relationship.”

Those “three amigos” did not include the former US ambassador to Ukraine, Marie Yovanovitch, who was recalled from that country in May, in part, the Wall Street Journal reports, because the president’s allies convinced him she was biased against him. She also reportedly would not cooperate with Rudy Giuliani — the president’s personal lawyer — in his push for a Ukrainian investigation into Joe and Hunter Biden.

Sondland, on the other hand, had made his allegiance to Trump clear and — based on Volker’s texts — appeared to be a proponent of a Biden investigation as well.

The ambassador to the EU was given the position as a reward for his $1 million donation to the Trump inaugural committee and is a businessman in the Trump mold: He was in the hotel and real estate business ahead of becoming a diplomat. Sondland also seemed to work to shield the president in the diplomatic corps during his text exchanges with Volker and current top US diplomat in Ukraine Bill Taylor, as Vox’s Andrew Prokop has written:

The texts get even uglier in late August and early September. That’s when Trump’s decision to hold up $400 million in military aid for Ukraine entered the discussion. One State diplomat, Bill Taylor, twice raised concerns that this was connected to Trump’s demands for investigations and with US politics. And, twice, Ambassador Gordon Sondland responded by urging him to talk on the phone rather than by text message.

“Are we now saying that security assistance and WH meeting are conditioned on investigations?” Taylor wrote on September 1. “Call me,” Sondland answered.

Eight days later, Taylor wrote: “As I said on the phone, I think it’s crazy to withhold security assistance for help with a political campaign.” Sondland responded by denying that this was the case — and urging him not to text about the matter anymore.

Specifically, Sondland responded to Taylor’s concerns about the security assistance delay by texting (after a four-and-a-half hour pause):

Bill, I believe you are incorrect about President Trump’s intentions. The President has been crystal clear: no quid pro quo’s of any kind. The President is trying to evaluate whether Ukraine is truly going to adopt the transparency and reforms that President Zelensky promised during his campaign. I suggest we stop the back and forth by text. If you still have concerns, I recommend you give Lisa Kenna or [Mike Pompeo] a call to discuss them directly.

The New York Times has reported Sondland crafted that text, a far more formal message than the others Congress has released, after consulting with Trump himself. And now, Trump is using that text both to defend himself and to shield Sondland from any questions about potential misconduct on the ambassador’s part.

“Importantly, Ambassador Sondland’s tweet, which few report, stated, “I believe you are incorrect about President Trump’s intentions. The President has been crystal clear: no quid pro quo’s of any kind.” That says it ALL!” (By “tweet,” the president seems to have meant text.)

….to see. Importantly, Ambassador Sondland’s tweet, which few report, stated, “I believe you are incorrect about President Trump’s intentions. The President has been crystal clear: no quid pro quo’s of any kind.” That says it ALL!

Whether House Democrats will be able to hear more about that text remains unclear. Sondland doesn’t seem interested in resigning in order to testify as a private citizen (like Volker was able to); but according to his lawyer, “he stands ready to testify on short notice, whenever he is permitted to appear.”

Friendly policies keep US oil and coal afloat far more than we thought
The decline and fall of the American death penalty
A black police organization issued a powerful defense of Colin Kaepernick
Joe Biden’s record on school desegregation busing, explained
Tax Day is now July 15. Here’s what that means.
A man is dead in Louisville after police fired on a crowd: What we know