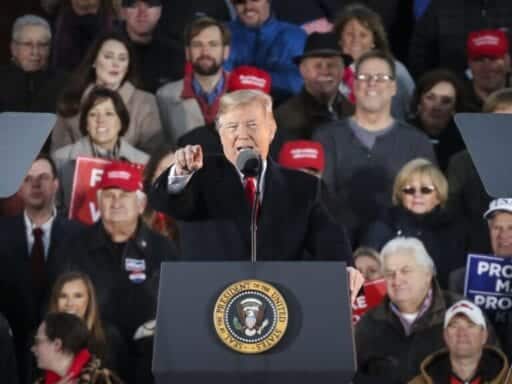 Trump was in Mississippi to support gubernatorial candidate Tate Reeves. Instead he defended himself against the impeachment inquiry.

When President Donald Trump appeared at a Tupelo, Mississippi rally Friday held to energize voters for the state’s Republican Lt. Gov. Tate Reeves — who is facing a tight race for governor against Democratic Attorney General Jim Hood on November 5 — it didn’t take long for the president to start stumping for himself instead.

In his first rally since the House of Representatives’ Thursday vote on the impeachment inquiry, the president did find some time to ask voters to support Reeves, who he brought onstage, but spent the majority of his address attacking lawmakers, the press, and political opponents to defend himself against growing scrutiny.

A day before the rally, the House voted to endorse an impeachment inquiry into the president’s efforts to pressure Ukraine into opening an investigation against his political opponent, former Vice President Joe Biden, and Biden’s son, Hunter.

As the House’s hearings with state officials are bringing potentially damaging information to light, Trump was eager to paint the investigation as a “hoax.” Proclaiming his innocence, he attacked Democratic leadership and threw a question back at the crowd: “How do you impeach a president who didn’t do anything wrong?”

“The [Democratic Party] leadership, they have no clue,” Trump continued. “They’re just very vicious people — actually, they’re sort of mentally violent people. But we’ve got it under control. It always help when you didn’t do anything wrong.”

Trump, alluding to impeachment, threatens that “if they ever do anything bad to us … that stock market will crash like you have never seen a crash before.” He then describes Democrats as “mentally violent.” pic.twitter.com/3avrDRQlN9

After spending time attacking his usual foils, including former President Barack Obama, his former presidential rival Hillary Clinton (whose mention was greeted by chants of “Lock her up”), and Republican Sen. Mitt Romney (who has said he has some concerns about Trump and Ukraine), Trump told the crowd he doesn’t fear his critics or impeachment, because he believes he will come out on top.

“They figured they could take us out a different way, very dishonestly: with the lying and the spying and the leaking,” Trump said. “And we are kicking their ass, I tell you.”

Recent revelations from the House’s closed-door hearings indicate a different story, however.

On Tuesday Alexander Vindman, a National Security Council staffer and a US Army lieutenant colonel, said he had expressed concerns internally over Trump’s push for Ukraine’s investigation into the Biden family. Adding credence to his words was the fact that he was party to the now infamous July 25 call in which Trump explicitly asked Ukraine President Volodymyr Zelensky to investigate both the Bidens and the Democratic Party.

This didn’t stop Trump from placing the blame for the impeachment inquiry elsewhere Friday, including the press. He blamed the media for framing his phone call with Zelensky as improper. And despite the fact the public record of the call came from the White House, said journalists intentionally removed the sarcasm and laughter from the call “because they’re dishonorable people.”

The president also colored the investigation as not only an attack against him, but a threat to democracy itself.

“The Democrats voted to potentially nullify the votes of 63 million Americans, disgracing themselves and bringing shame upon the House of Representatives,” Trump said, according to Politico. “Make no mistake they are coming after the Republican Party and me because I’m fighting for you.”

The House’s vote on Thursday wasn’t about whether or not Trump should be impeached —we’re still far away from that vote. It did, however, set guidelines on how the impeachment inquiry will be handled from now on.

The resolution passed almost entirely on party lines: all but two Democrats voted yes — Minnesota Rep. Collin Peterson and New Jersey Rep. Jeff Van Drew broke from their party — while all Republicans voted no. Independent Rep. Justin Amash of Michigan, who is a former Republican, joined Democrats on the issue.

In response to the vote, Trump lashed out on Twitter, calling the investigation a “witch hunt” and claiming it was hurting the stock market.

Although the vote didn’t really change the status quo of the investigation, Vox’s Andrew Prokop explains it has interesting political implications:

Thursday’s vote is intriguing politically for two reasons. First, this is a vote that Pelosi has spent all year trying to stave off thanks to fear of putting vulnerable House Democrats from Trump-friendly districts in a tough spot.

Second, and relatedly, Republicans have spent weeks making the lack of this vote a key talking point in their criticisms of Democrats’ impeachment inquiry. In fact, House rules do not require a vote to start such an inquiry, nor does the Constitution, as Vox’s Ella Nilsen explained. But now that Democrats have decided to hold one anyway, Trump’s defenders will have to find some other process complaint to gripe about.

Under the new resolution, Rep. Adam Schiff (D-CA), the chair of the House Intelligence Committe and a close ally of Speaker Nancy Pelosi, will hold open hearings. The inquiry has reached a new phase — one where the public will be more closely involved.

Support for impeachment is growing, even in battleground states Trump won

Early on, Democratic leadership had been weary of pursuing an impeachment inquiry due to concerns over potential political consequences. And while impeachment remains to be a partisan issue, recent polling is showing growing support for an investigation.

Polling from New York Times/Siena College last week showed that a majority of voters in Arizona, Michigan, North Carolina, Pennsylvania, and Wisconsin — five battleground states that Trump won in 2016 and will heavily rely on in 2020 — support an impeachment inquiry.

The same poll indicates that these voters are still against removing Trump from office. As Vox’s Aaron Rupar explains, however, open hearings could change their mind:

That same poll indicates that majorities in each of those states currently oppose Trump’s removal from office. But as the Nixon Watergate hearings taught us, public hearings laying out the evidence that Trump abused his office during his dealings with the new Ukrainian government could change that in a hurry, and those hearings are likely to begin as soon as later this month.

Trump should also be worried that his overall approval rating among Republicans has also dropped to a record low at 74 percent, according to a a Washington Post/ABC poll released on Friday.

And even the support of Senate Republicans, who had been staunch supporters of Trump through thick and thin, is beginning to show signs of weakening. Thursday, Sen. Tim Scott (R-SC) told reporters, “There’s lot of things that concern me” when asked about the allegations of wrongdoing Trump faces. And Scott, while in the minority, is not alone. Other senators, from Romney to Sen. Susan Collins have expressed concern.