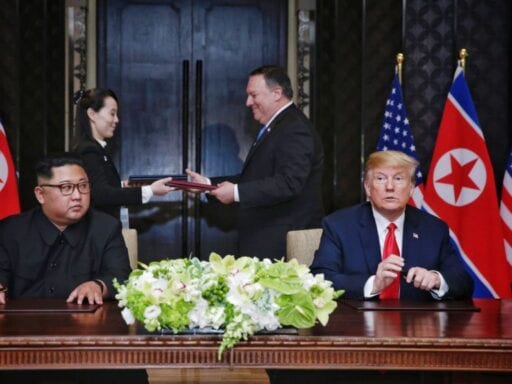 Trump’s fans have joined the president’s victory lap over his summit with Kim Jong Un — including in a bizarre fashion show nod to the meeting.

June was a busy month for President Donald Trump. He met with North Korean leader Kim Jong Un in Singapore, the first US president to do so, and he also turned 72.

At an event at the Trump International Hotel in Washington, DC, Virginia Women for Trump gathered for a “Tea for Trump” to celebrate Trump’s milestones in diplomacy and aging. Trump wasn’t present, but lots of female supporters were (along with controversial Virginia GOP Senate candidate Corey Stewart.)

The event included a fashion show, where attendees modeled gowns, many inspired by the president himself. But one North Korea summit-inspired look stood out, according to the New York Times’s Elizabeth Williamson, who captured the scene:

At one key moment, a woman in a flowing, black and white, Asian-style costume appeared. As martial-sounding music played, she walked the runway with arms outstretched, carrying what looked like a red velvet and gilded Valentine’s Day candy box. The women cheered as she paused, lifting the box to the heavens.

[Organizer] Ms. [Alice] Butler-Short took the stage, her substantial, bejeweled gold lamé millinery bobbing. “That signified our great president and the negotiations he is having with North Korea,” she said. The music, she explained, was the North Korean national anthem.

This bizarre tribute to Trump’s diplomacy with North Korea is even stranger when you consider that the beginning of 2018, Trump was taunting Kim by saying his “nuclear button” was bigger and more powerful than his. Indeed, the homage to North Korea is a dramatic example of the about-face among Republicans — especially Trump backers — when it comes to Pyongyang. It mirrors Trump’s own reversal from threatening “fire and fury” on North Korea to praising the brutal dictator as the total package, a “funny guy” with “a great personality” who is “very smart” and “loves his people.”

Trump’s supporters have followed suit. According to a poll released last week from Ipsos and the Daily Beast, self-identified Republicans view the North Korean authoritarian who uses public executions and forced labor to oppress his people and, until recently, was threatening to fire missiles at the US territory of Guam, with a higher favorability than House Minority Leader Nancy Pelosi.

Kim’s favorability rating is 19 percent among Republicans. Pelosi’s is 17 percent.

About half of all Americans approved of Trump’s summit, but only about a quarter believed it would be successful, according to a separate Reuters/Ipsos poll taken after the summit. Yet the same survey found that Republicans were two times more likely than Democrats to say Trump and Kim’s meeting diminished the threat of nuclear war, and three times more likely to say both countries would stick to their agreements.

Trump’s unconventional approach toward North Korea had many skeptics ahead of the summit, though it was at least a welcome development compared to the brinkmanship of the past year. But many observers suggested Trump gave up huge concessions to Kim — namely a freeze on US-South Korean military exercises, long a sticking point for North Korea — without getting very much tangible in return. North Korea had agreed to “work toward” denuclearization, which is largely what it had said ahead of the summit.

That didn’t stop Trump from declaring total victory, announcing on Twitter that “there is no longer a Nuclear Threat from North Korea.” (Meanwhile, Trump conveniently didn’t tweet about how his administration issued a notice about North Korea on Friday that said the country continued “to pose an unusual and extraordinary threat to the national security.”)

Trump’s self-congratulatory victory lap on North Korea seems to have worked with his supporters — including the congressional Republicans who nominated him for the Nobel Peace Prize, even before the actual summit.