Trump talked about Mueller’s testimony for around 90 seconds. He packed in 6 lies. 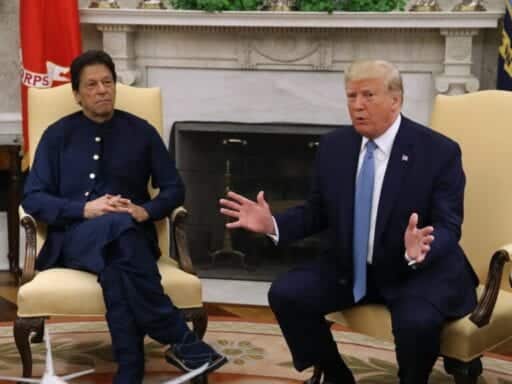 Share
Loading...
President Trump appears to be trying to get ahead of the Mueller testimony. | Mark Wilson/Getty Images

“No obstruction … We had a total no-collusion finding.”

During a lengthy and at times wild White House press availability alongside Pakistani Prime Minster Imran Khan on Monday, President Donald Trump was asked if he plans to watch former special counsel Robert Mueller’s much-anticipated congressional testimony on Wednesday. Trump said he might watch “a little bit.” Some outlets highlighted that revelation as a key takeaway from Trump’s remarks about Mueller.

But perhaps more notably, in the span of just over one minute of talking, Trump told at least six demonstrable lies about Mueller and his investigation. The blizzard of falsehoods suggests that Trump anticipates Mueller’s testimony and its aftermath won’t be good for him, so he’s doing his best to do some preemptive gaslighting.

“We had a total no-collusion finding”

Trump began by saying that while he might watch some of Mueller’s testimony, he won’t watch much, “because you can’t take all those bites out of the apple.” He then completely mischaracterized the bottom-line findings of the Mueller report.

“We had no collusion, no obstruction, we had no nothing,” Trump said. “We had a total no-collusion finding.”

Trump tells a series of lies about the Mueller report and Mueller himself, including that the report is “a total no collusion finding” (it is not) and that Mueller is “best friends” with Comey (they are not) pic.twitter.com/EtUvEerF6z

That is not, however, what the Mueller report actually says. As my colleague Zack Beauchamp explained, while Mueller did not find enough evidence of collusion to charge Trump campaign officials with conspiracy-related charges (other than former campaign chair Paul Manafort and aide Rick Gates, who pleaded guilty to “conspiracy against the United States” charges that don’t imply “collusion”), it paints a picture of a campaign that was “both actively seeking to cultivate a relationship with the Russian government and willing to work with it to acquire damaging information about its political opponents. That willingness included explicitly sharing information with or soliciting information from Russian operatives.”

With regard to the Trump campaign’s relationship with Russia, the Mueller report explicitly says that “[a] statement that the investigation did not establish particular facts does not mean there was no evidence of those facts.” It also notes that the investigation “established that the Russian government perceived it would benefit from a Trump presidency and worked to secure that outcome, and that the Campaign expected it would benefit electorally from information stolen and released through Russian efforts.”

So while it is accurate to say that Mueller did not find sufficient evidence of collusion to charge Trump campaign officials with crimes, Trump’s claim that Mueller came back with “a total no-collusion finding” is not.

Despite what Trump said on Monday, it’s also not the case that Mueller’s report found “no obstruction.” In fact, quite the contrary.

Mueller’s report details 10 episodes in which Trump potentially committed obstruction of justice — including Trump’s repeated efforts to fire Mueller after he’d been appointed special counsel and then subsequently asking his White House counsel to lie about it. But Mueller ultimately determined that because of the Justice Department Office of Legal Counsel’s 2000 opinion that the department can’t indict a sitting president, charging Trump with crimes while he’s still in office wasn’t an option for him. Mueller left ultimate resolution of the obstruction of justice question to Attorney General William Barr, who promptly cleared the president of criminal wrongdoing.

In short, Mueller’s report strongly suggests that Trump would’ve been charged with obstruction of justice if he wasn’t the president. That’s a far cry from “no obstruction.”

“The Democrats were devastated by it. They’re not doing anything.”

After misrepresenting Mueller’s findings, Trump tried to portray Democrats as paralyzed by the fact that the former special counsel didn’t haul the president out of the White House in handcuffs.

While it’s true that Democrats are not working on the legislation Trump wants them to work on — such as cracking down on legal immigration or building a border wall — it is not the case that they are “not doing anything.” With regard to health care, House Democrats recently held a hearing on Medicare-for-all. And just last Thursday, House Democrats passed a $15 minimum wage bill. That legislation won’t go anywhere as long as Mitch McConnell remains Senate majority leader, but that’s a different discussion.

“Robert Mueller, I know he’s conflicted,” Trump said. “There’s a lot of conflicts that he’s got, including the fact that his best friend is Comey.”

While Comey and Mueller had a genial professional relationship during their days together at the FBI, Comey testified late last year that he and Mueller are “not friends in any social sense.” Trump’s claim appears to be rooted in an exaggerated interpretation of a 2017 Politico piece that detailed Comey and Mueller’s close working relationship.

But asked about his relationship with Mueller during his aforementioned testimony, Comey said, “I don’t know his phone number, I’ve never been to his house, I don’t know his children’s names.” Furthermore, ethics experts are in broad agreement that a cordial working relationship doesn’t rise to the level of the problematic conflict of interest Trump wants the Comey-Mueller relationship to be.

Trump then asserted that another of Mueller’s conflicts is that “he wanted the job of FBI director and he didn’t get it.”

But there’s no evidence Mueller wanted the FBI director job after Trump fired Comey. On the contrary, as detailed in the Mueller report, former White House strategist Steve Bannon told Mueller’s team that he recalled the White House inviting “Mueller to speak to the President to offer a perspective on the institution of the FBI,” but added that Mueller “did not come in looking for the job.”

While there’s no evidence Mueller wanted Trump to tap him as FBI director, Washington Post reporter Devlin Barrett reported in May that the White House was willing to push for changes in federal law if Mueller was willing to accept the role.

Fun Fact: Bob Mueller is barred by law from serving again as the FBI Director. At the meeting POTUS mentions, White House officials told him, per sources, they were willing to push Congress to pass a new law to make Mueller’s re-appointment possible. https://t.co/cvW1ihuVlJ

Still on the topic of Mueller’s purported conflicts of interest, Trump noted that he and Mueller “had a business relationship where I said no and I would say he wasn’t happy.” His comments alluded to the fact that Mueller was once a member of Trump’s Virginia golf club, but terminated his membership and asked for a partial refund of his membership fee.

CNN, citing the Mueller report, recently debunked the insinuation Trump has repeatedly made that Mueller’s departure from his golf club was an acrimonious split that resulted in Mueller having a vendetta against Trump:

In October 2011, Mueller wrote a letter to the Trump National Golf Club in Sterling, Virginia, resigning his family’s membership, explaining, “we live in the District and find that we are unable to make full use of the Club,” according to footnote 529 in the redacted [Mueller] report. In the same letter, Mueller asked “whether we would be entitled to a refund of a portion of our initial membership fee,” which the report says was paid in 1994.

The club responded about two weeks later saying the resignation would be effective October 31, 2011, and that they would be “placed on a waitlist to be refunded on a first resigned / first refunded basis,” according to the report.

The Muellers did not have further contact with the club, the report reads.

In sum, Trump’s comments about Mueller’s alleged conflicts of interest represented an effort to throw a bunch of stuff against the wall to see if anything sticks.

Trump then wrapped up his comments about Mueller and his forthcoming testimony with more falsehoods, saying Mueller “still ruled, and I respect him for it, he still ruled no collusion, no obstruction.” Neither of those things happened.

All of these lies were told in less than 90 seconds. It leaves one wondering how many distortions and misrepresentations Trump will push on Wednesday, when everyone — including the president — will be watching Mueller’s full day of testimony.