Trump: “Tariffs are the greatest”; also farmers need $12 billion in aid because of tariffs 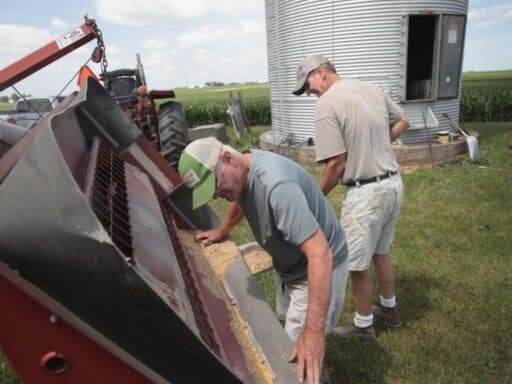 The administration plans an aid package to shore up the agriculture industry.

President Donald Trump declared tariffs “the greatest” over Twitter Tuesday morning, even as his administration prepares to shore up the agricultural industry, which is weathering financial turmoil induced by his trade policies.

Tariffs are the greatest! Either a country which has treated the United States unfairly on Trade negotiates a fair deal, or it gets hit with Tariffs. It’s as simple as that – and everybody’s talking! Remember, we are the “piggy bank” that’s being robbed. All will be Great!

The administration reportedly plans to give farmers $12 billion in emergency aid to cope with the fallout from the tariff regime, Politico first reported Tuesday. Farmers have been among those hit hardest under Trump’s protectionist trade agenda, as foreign countries levy tens of billions of dollars in retaliatory tariffs largely on the American agricultural industry. China, Mexico, and Canada have responded to the Trump administration’s taxes on imported steel, aluminum, and electronics with taxes on American soybeans, dairy, pork, apples, and potatoes, as well as other US products.

The impact of tariffs on US agriculture is no joke. Prices for agricultural products like soybeans have dropped to a 10-year low since Trump imposed sweeping tariffs on trade and aluminum earlier this year. And farmers across different markets have grown increasingly nervous about how their businesses will fare if the trade war continues.

The administration’s plan, which has yet to be formally released, would reportedly be aimed at stabilizing the agricultural industry through three programs:

The Washington Post reported that this stabilization package will use a Depression-era program that allows the government to borrow up to $30 billion from the Treasury without congressional approval.

Some kind of fix for farmers has been in the works for quite some time. Rep. Mike Conaway (R-TX), who chairs the House Agricultural Committee, told Vox last week that he was confident the administration would act to help farmers “persevere” through this period.

“The president has great agriculture advisers around him, and his public comments indicate that he understands this is troubling to the folks in the production of agriculture in Middle America,” Conaway said. “[Agriculture Secretary] Sonny Perdue has some tools that he’s working on to mitigate in some small way the impact the tariffs are having.”

Meanwhile, Trump appears steadfast in his tariff agenda. He has already threatened to tax foreign car imports ahead of trade talks with the European Union this week, and has been tweeting a very rosy picture of the tariffs’ impact on the American economy.

“I am fighting for a level playing field for our farmers, and will win!” he tweeted earlier this month.

Trump’s tariffs have hit farmers the hardest. No one knows when this will end.

Trump has been clear and consistent about his restrictionist trade agenda. The administration ended exemptions to steel and aluminum tariffs for many US trade allies, including Canada, Mexico, and the EU, in May. Trump has imposed tariffs on an additional $34 billion worth of Chinese products. He’s threatening tariffs on a total of $500 billion of Chinese goods and a foreign car and auto parts import tax that would hit American trade alliances in Europe.

People in the American agriculture industry know that if the administration continues to follow through on this, they’ll be the ones continuing to get hit.

Agriculture has incredibly low barriers to trade, making the industry an easy target for retaliatory tariffs. Already, Mexico, China, and Canada have retaliated to the United States’ newly placed steel and aluminum tariffs with tariffs of their own.

“It’s one of the few areas that the US has a surplus; it makes sense they would target that,” Chad Hart, a crops market specialist with Iowa State University, told Vox, adding that there’s a political strategy element as well. “It makes sense politically because you are looking at Republican leadership, and farmers do tend to vote more Republican.”

The US has about $140 billion of agricultural exports a year. Canada and Mexico are major trade partners, together importing about $39 billion. China, Japan, and South Korea import around $39 billion, and Europe makes up around a $12 billion share of agricultural imports. But tensions are high across the board.

While many farmers are Republicans and Trump supporters — and generally can get behind Trump’s call to equalize the playing field — one Wisconsin dairy farmer, Roger Mehre, told Vox earlier in July that farmers in his circles are getting increasingly nervous.

“I almost get the feeling that [Trump] is trying to be a bully and he is making these countries bow to him, and that’s just not going to happen,” Mehre said, pointing out that it’s not just dairy that’s affected; it’s pork, soybeans, corn, poultry — the list goes on. “We need them, and they need us. Both sides are going to lose.”

Perdue has tried to assure farmers they’ll be protected from any trade wars, and this emergency aid package is certainly a step to mitigate financial disaster. But farmers don’t have a clear idea what the president’s endgame is, and Trump hasn’t treaded lightly with his rhetoric. It’s something Republican lawmakers from agriculture-heavy states, like Sens. Ben Sasse (R-NE) and Chuck Grassley (R-IA), have warned the administration about.

“This is dumb,” Sasse said in a statement in May. “Europe, Canada, and Mexico are not China, and you don’t treat allies the same way you treat opponents. We’ve been down this road before — blanket protectionism is a big part of why America had a Great Depression.”

Trump does seem aware of the potential political fallout. But for now, he’s trying to convince farmers to stick with him — and his administration is attempting to stanch the bleeding with billions in emergency aid.

Andrew Cuomo has won himself another term, but his presidential aspirations are dead
Hunters’ devastating ending and its two twists, explained
What David Brooks gets wrong about Bernie Sanders
Sharp Objects wraps small-town murder clichés in an irresistibly glossy package
Vox Sentences: Internet down and protesters out in Iraq
Biden’s Covid-19 relief plan has a Medicaid expansion problem