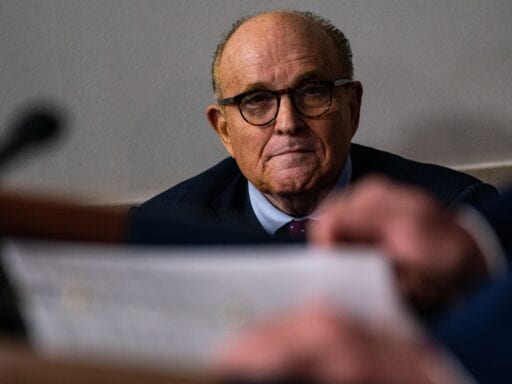 Rudy Giuliani is again trying to drum up a scandal about the Bidens and Ukraine.

It’s October in a year when President Donald Trump is running for reelection — and, as if on cue, the mysteriously obtained private emails of someone close to his opponent have been leaked.

The leaker in this case is President Trump’s lawyer Rudy Giuliani, who provided a copy of a hard drive that contains photos and purported emails of Joe Biden’s son Hunter to the New York Post.

It’s not clear whether the supposed emails, which involve Hunter and the Ukrainian gas company he worked for, Burisma, are authentic. What’s even less clear is how they ended up making their way to Giuliani — and whether illegality or foreign interference might have been involved. During the 2016 campaign, Russian intelligence officers hacked Democrats’ emails and provided them to WikiLeaks, and the release of Clinton campaign chair John Podesta’s emails occurred in the final weeks before Election Day.

But Hunter Biden has long been central to Trump’s reelection strategy. In fact, Trump was impeached last year due to his and Giuliani’s efforts to drum up a scandal related to the Bidens and Burisma. So now, less than three weeks before the election and with Trump trailing in polls, Giuliani appears to be picking up where he left off.

Considering what happened in 2016, one question that has naturally arisen here is: Was Hunter Biden’s information hacked or stolen and then provided to Giuliani?

The New York Post tells a convoluted story to explain how Giuliani got the emails — a story that raises far more questions than it answers.

It all started, according to the Post, in April 2019, when an unidentified man went to a computer repair shop, to drop off a water-damaged laptop with a “Beau Biden Foundation” sticker (a charitable foundation started in memory of Hunter’s late brother).

The shop owner (who was interviewed by the Post as an anonymous source) claims the man never returned to reclaim the laptop. But he says he recovered data from it and, lo and behold, he discovered there were emails and photos related to Hunter Biden.

The shop owner claims he told the federal government about it, and they seized the laptop and hard drive in December 2019. But he claims he copied the hard drive first and provided it to Rudy Giuliani’s lawyer, Robert Costello.

Months later, somehow, former Trump adviser Steve Bannon (who was indicted on fraud charges in August) learned of the hard drive and told the Post. Finally, Giuliani provided the hard drive to the New York Post last Sunday, after having apparently kept it under wraps for about 10 months.

This is a curious tale. Even if we take it at face value, it is unclear who dropped off the laptop (with the conveniently identifying sticker) during the very month conservative media started covering Burisma. It’s also unclear why that person never reclaimed it, why Hunter Biden’s information was on it, why the shop owner would hand it over to Rudy Giuliani’s lawyer, and what the interest of the federal government was.

Giuliani has also spent months working with Andrii Derkach, a member of the Ukrainian parliament whom the US Treasury Department recently sanctioned as a Russian agent waging a “covert influence campaign” to affect the US election (by releasing information about purported Biden wrongdoing). Additionally, Burisma was reportedly hacked late last year and a security firm attributed that hack to the Russian military. So there are many reasons to question what actually happened here.

Evidently there were some photos of Hunter Biden on the hard drive (the New York Post has published them), and the reporters claim an explicit video of Hunter is on there as well.

But that does not necessarily mean the emails on the hard drive are authentic and unaltered. It would certainly be possible for a nefarious actor to fabricate or alter some documents among a trove of largely accurate ones. (Indeed, the Post story does not mention any effort to authenticate the emails.)

Then there’s the larger problem that, even if the emails are authentic, bits from them can be selectively chosen and spun out of context to make misleading claims.

Trump’s team has spread the unfounded conspiracy theory that Joe Biden forced out Ukraine’s prosecutor general Viktor Shokin to protect Burisma and his son from an investigation. This theory makes little sense, as it was the consensus position of the US government and Western institutions like the International Monetary Fund to oust Shokin due to his corruption and ineffectiveness. But Trump’s aim is to paint Biden as corrupt, in a repeat of his 2016 strategy against Hillary Clinton.

Now, the Post is touting one purported email from Burisma adviser Vadym Pozharskyi as a scandalous “smoking gun.” In the purported email, Pozharskyi thanks Hunter for “inviting me to DC and giving an opportunity to meet your father and spent some time together,” and proposes meeting that day. But there’s no confirmation the meeting with then-Vice President Biden happened or, if it did, that the two men discussed Shokin. (A Biden campaign spokesperson told Politico that they reviewed the VP’s official schedules and that “no meeting, as alleged by the New York Post, ever took place.”)

Hunter has had drug use issues in the past, and he took lucrative jobs for foreign companies or clients that he appeared not to be qualified for. But there’s been a history of misleading information and outright misinformation pushed about him — often involving Giuliani and Bannon, both of whom were involved in this as well. So supposed bombshell revelations from questionable sources in the days before the election should be viewed with a great deal of skepticism.

Julián Castro ends his presidential bid
The Supreme Court term starts Monday — with or without Brett Kavanaugh
Medicaid expansion’s private option is nearly gone
Why Spotify and a casino bought The Ringer and Barstool
Bidding has begun on bankrupt Forever 21
Poll: Americans want corporations to promise no layoffs in exchange for bailouts