Trump: The economy is the best in history. Also Trump: We need to cut raises for federal workers. 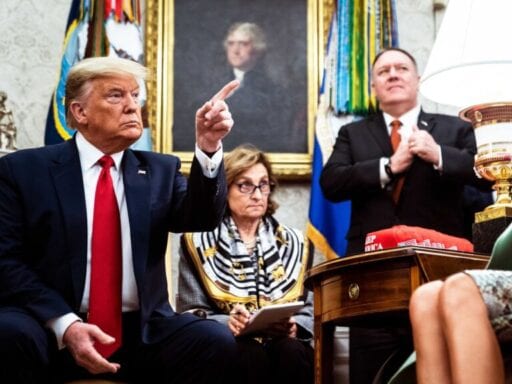 The president is shamelessly trying to have it both ways.

The juxtaposition illustrates both how nothing Trumpworld says can be taken at face value, as well as the disdain the administration has for non-military government workers.

Trump made the aforementioned claim about the economy being “the best it has ever been” during his State of the Union speech on February 4. He reiterated it on Tuesday.

During congressional testimony on Wednesday, Treasury Secretary Steve Mnuchin echoed Trump’s theme, telling senators that the president’s “economic freedom agenda is working” and that “American families are earning more each year … growth [will] reduce our debt and deficits over time.”

But at the same time as Trump and administration officials are painting this rosy picture, the president quietly sent a letter to Congress on Monday announcing that as part of his 2021 budget proposal, he wants a scheduled pay raise for civilian federal workers cut from 2.5 percent to just 1 percent. The letter cites a “national emergency or serious economic conditions affecting the general welfare” and claims federal agencies “cannot sustain such increases.”

From the letter, which was first reported on by Slate:

Title 5, United States Code, authorizes me to implement alternative plans for pay adjustments for civilian Federal employees covered by the General Schedule and certain other pay systems if, because of “national emergency or serious economic conditions affecting the general welfare,” I view the increases that would otherwise take effect as inappropriate.

Under current law, locality pay increases averaging 20.67 percent, costing $21 billion in the first year alone, would go into effect in January 2021, in addition to a 2.5 percent across-the-board increase for the base General Schedule.

We must maintain efforts to put our Nation on a fiscally sustainable course; Federal agency budgets cannot sustain such increases. Accordingly, I have determined that it is appropriate to exercise my authority to set alternative pay adjustments for 2021 pursuant to 5 U.S.C. 5303(b) and 5 U.S.C. 5304a.

One thing that has negatively affected the “sustainability” of the federal budget is the 2017 Tax Cuts and Jobs Act. Though that package resulted in tax cuts for most Americans, it mostly benefited rich people and corporations, creating a massive spending gap while only modestly stimulating the economy. Trump’s 2021 budget proposal cut entitlement programs while making those tax cuts permanent.

And while the American economy is strong, it is not the best in history. As the Washington Post notes, Trump “has never achieved an annual growth rate above 3 percent, but in 1997, 1998 and 1999, the gross domestic product grew 4.5 percent, 4.5 percent and 4.7 percent, respectively.” The unemployment rate, while low, is not the lowest in history, and Trump’s job creation record lags behind Obama’s. Still, the notion that the government can afford to spend $738 billion on defense but not a modest raise for federal workers is hard to buy.

The stock market is hitting all-time highs and corporate profits have hit unprecedented levels. But this is cold comfort to federal workers who, according to one recent study, make 27 percent less than their private-sector counterparts.

Alluding to the disconnect between the haves and have-nots in Trump’s economy, Tony Reardon, president of the National Treasury Employees Union, said in a statement that “[f]or an administration that has added $3 trillion to the federal debt, gouging federal employee pay and benefits in the name of deficit reduction is ridiculous.”