Trump threatens another government shutdown — this one, a month before midterms 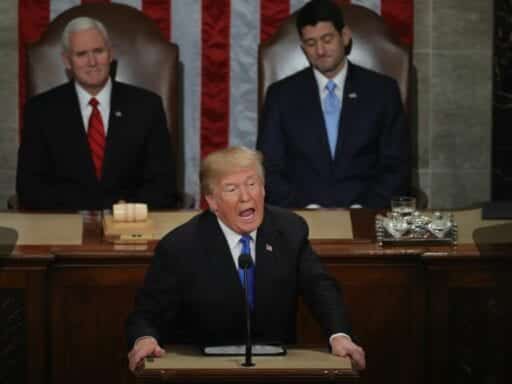 President Donald Trump is threatening to shut down the government over immigration — for the third time this year. And this time, if he followed through, it would be happening just a few months before the highly contentious midterm elections.

The government runs out of money at the end of September, a deadline congressional Republicans are eager to meet in order to avoid any additional drama before the November elections. But that’s been made all the more complicated by Trump, who nearly vetoed a spending package earlier this year because it didn’t fund his border wall, and is now threatening to do so again with even more sweeping hardline immigration demands.

On Sunday, Trump tweeted that he would again be willing to veto a spending bill, if “Democrats do not give us the votes” on everything from border security, so-called “catch and release” and the diversity visa lottery.

I would be willing to “shut down” government if the Democrats do not give us the votes for Border Security, which includes the Wall! Must get rid of Lottery, Catch & Release etc. and finally go to system of Immigration based on MERIT! We need great people coming into our Country!

Trump’s tweet is a considerable blow to House Speaker Paul Ryan and Senate Majority Leader Mitch McConnell, who visited the president last week to pitch him on leaving immigration out of this spending fight. Trump was reportedly receptive to their pleas last week — but not for long.

Republicans are facing a competitive midterm election cycle, in a year Democrats are gunning to retake control of the House, and even possibly make gains in the Senate. With Trump’s low approval rating and a somewhat short list of legislative wins to tout on the campaign trail, the last thing Republicans want is to have to defend an unpopular government shutdown over Trump’s already unpopular immigration agenda.

Trump’s demands are significant. And they cover issues that Congress has shown time and time again they can’t agree on. While the tweet is vague on policy specifics, Trump is essentially calling for three sweeping immigration reforms.

1) Funding for the border wall. This is one Trump’s longest-standing asks on immigration. He’s demanded everywhere from $5 billion to the full $25 billion to build the wall (there are multiple reports that find building the wall will actually cost much more than that).

Democrats have been in lock step against funding the wall from the start, but they’ve also been clear that they are willing to concede border-wall and border-security funding if Trump will agree to a legislative fix for the Deferred Action for Childhood Arrivals program. Trump however, has rejected every Democratic-sponsored offer so far. Instead, he has espoused hardline views on immigration that not only Democrats won’t agree to, but also don’t have consensus among Republicans.

2) An end to “catch and release.” “Catch and release” is what Republicans call the practice of releasing undocumented immigrants from detention and allowing them to live in the US while they wait for their asylum claims to be adjudicated. Trump’s administration has attacked this practice from the start — claiming it’s allowed for “widespread lawlessness,” as Vox’s Dara Lind explained. The Trump administration’s attempt to end so-called “catch and release” is what ultimately led to the “zero-tolerance” border policy and the separation of more than 2,500 children from their families.

The bipartisan backlash against family separations ultimately pushed the administration to reverse its policy — but the issue is not resolved. To fully address family separations, conservatives and Trump allies are calling for Congress to pass a law overturning a court order that prevents children from being indefinitely detained with their families at the border. This isn’t something lawmakers, past Trump’s most conservative allies on Capitol Hill, agree on.

3) Sweeping reforms to legal immigration. Every immigration proposal the White House has offered so far has demanded sweeping changes to the legal immigration system — from getting rid of the diversity visa lottery program to ending family-based immigration. The idea is that people should only be allowed to enter the US if they demonstrate a valuable asset, instead of just being sponsored by their relatives. But Trump’s proposed reforms have all substantially cut the number of legal immigrants that would be allowed into the country — a reform that not only is a non-starter for Democrats but is one traditional Republicans are also uncomfortable with.

The bottom line is Trump is not backing down from demands for comprehensive immigration reform, something both the Senate and House have tried and failed on both a bipartisan and partisan basis.

Now Trump is raising the stakes, tying it to a highly contentious spending fight months before an election.

Trump’s immigration agenda is very unpopular. And he keeps forcing it on Republicans.

If it were up to Republicans, Congress wouldn’t be dealing with immigration right now — and they certainly wouldn’t be advocating for a government shutdown in the months leading up to the midterms. Lawmakers typically avoid divisive issues in an election year.

For the past five months, the House and Senate have been sprinting to pass all 12 of their annual spending bills before the September deadline. The House has passed six funding bills and the Senate is on the path to pass nine by the end of next week — leaving the most contentious spending battles over the Department of Homeland Security for later in the summer.

But even in a year when Democrats are trying to harness their base’s enthusiasm to knock Republicans out of power in Congress, Trump hasn’t paid heed to his party’s political concerns. From his border wall to the administration’s decision to sunset DACA, to the family separations at the border, Trump has forced Congress to address some of the most contentious immigration policies without much direction or planning. Not only that, but he’s also refused to back down from hardline anti-immigration demands that don’t even have the support of his entire party.

Congress keeps failing to find consensus on the narrowest of immigration reforms. And yet, Trump keeps trying to force their hand on the most contentious comprehensive reforms.