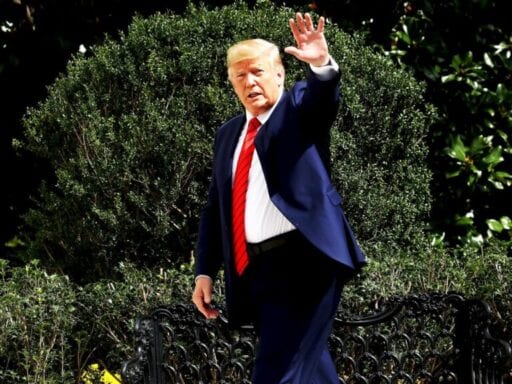 “The spies and treason, we used to handle it a little differently than we do now,” Trump said.

In a private meeting with US staffers at the United Nations on Thursday, President Donald Trump ranted about the “spies” within his administration who gave information to the whistleblower in the Ukraine case and mused about punishing them the way “we used to do in the old days” — seemingly alluding to the practice of executing spies for treason.

“You know what we used to do in the old days when we were smart? Right? The spies and treason, we used to handle it a little differently than we do now,” he continued.

Trump is embroiled in a scandal about whether he improperly used his position to try to coerce Ukrainian President Volodymyr Zelensky into investigating Trump’s 2020 political opponent, former Vice President Joe Biden — perhaps by withholding military aid to the Eastern European country.

That information first came to light as a result of an intelligence community whistleblower complaint, which was declassified and made public on Thursday. The complaint, which is based not on first-hand information but rather discussions with US officials in the know, also alleges that the White House tried to cover up the phone call by hiding the transcript in a secret electronic system.

It’s the people within the administration who spoke to the whistleblower and caused him to file his complaint whom Trump is describing as “spies” and fantasizing about executing like we did in “the old days” (like in the Revolutionary War when troops would hang traitors for their treachery or when the Rosenbergs were executed in 1953).

But, of course, Trump also had plenty of vitriol for his usual targets, calling the media “scum” and “animals,” harsher terms than he tends to use in more public settings.

He also attacked Joe Biden and his son Hunter, who was discharged from the Navy in 2014 for cocaine use before going on to serve on the board of a Ukrainian company. That tenure is what Trump wants authorities in Kyiv to look into.

“So you have Sleepy Joe and his kid, who’s got a lot of problems, he got thrown out of the Navy — look, I’m not going to, it’s a problem,” Trump said. “So we won’t get into why. He got thrown out of the Navy and now this kid goes into Ukraine, walks away with millions of dollars, he becomes a consultant for $50,000 a month and he doesn’t know anything compared to anybody at this firm. He’s a stiff. He knows nothing. He’s walking away with $50,000.”

That Trump is acting out — and potentially threatening violence — over what looks like his own abuse of power is itself an abuse of his station. But it’s increasingly clear that he just can’t help himself.

Trump walked (briefly) in front of the queen, and apparently that’s not allowed
Rep. Jeff Van Drew of New Jersey, who left the Democratic Party to back Trump, wins reelection
Watch AOC ask Mark Zuckerberg if she can run fake Facebook ads, too
The Trump administration is refusing to fully reinstate DACA
The Capitol rioters put themselves all over social media. Now they’re getting arrested.
Lisa Murkowski says she might leave the GOP — but “absolutely” won’t join the Democrats