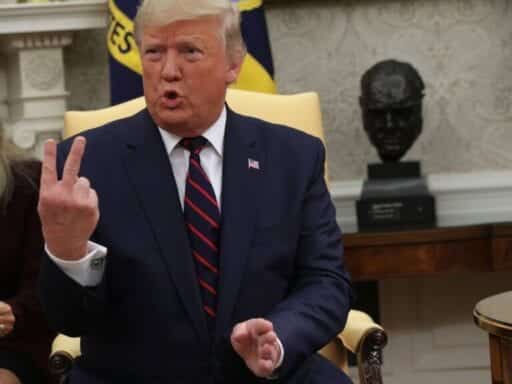 Share
Loading...
President Donald Trump speaks to members of the media as he meets with President Sergio Mattarella of Italy in the Oval Office of the White House October 16, 2019 in Washington, DC. | Alex Wong/Getty Images

Here’s a fact-check of the president’s wild and outrageous Syria comments.

In the span of about four minutes, President Donald Trump made at least six false statements on the unfolding crisis in Syria triggered by his decision last week to withdraw US troops.

Sitting alongside Italian President Sergio Mattarella in the Oval Office on Wednesday, the president spoke about issues ranging from the safety of US troops in Syria to Russia’s position on ISIS. The string of nonsense comments was either intentionally designed to mislead or, worse, a reflection of Trump’s own deep confusion over his Syria policy.

And as if that weren’t enough, in a press conference with the Italian president shortly after, Trump continued his factually challenged Syria rant with yet another false statement.

In the 10 days since the White House announced the troop withdrawal, nearly a thousand prisoners with suspected ISIS ties escaped from a camp in the area. Syrian Kurdish fighters — who allied with the US to defeat ISIS — struck a deal with Syrian President Bashar al-Assad’s government to fend off the invading Turkish forces. Russia has already started to fill the vacuum America left. And Trump has now sanctioned Turkey for its actions, pitting the US firmly against its own NATO ally.

TRUMP: “I view the situation on the Turkish border with Syria to be, for the United States, strategically brilliant. Our soldiers are out of there, they’re totally safe. They’ve got to work it out. Maybe they can do it without fighting.” pic.twitter.com/4GvGjfeapR

It’s hard to imagine a worse decision on Syria than Trump’s. But to hear Trump tell it, everything’s going just fine. So it’s worth taking each of his comments one by one, in order, to see just how untrue and dangerous they are.

“Our soldiers are not in harm’s way, as they shouldn’t be, as two countries fight over land. That has nothing to do with us.”

Let’s start with “our soldiers are not in harm’s way.” Despite Trump’s insistence that the 1,000 US troops in Syria are out of the country, most are still there. The administration has announced a “deliberate” withdrawal, and it looks like some progress has been made, but for now, those that remain are still in danger.

Just a day earlier, American F-15 fighter jets and Apache helicopters were deployed in a “show of force” as Turkish-backed militias in Syria came close to US troops in the town of Ain Issa near the Syrian-Turkish border.

“The Turkish forces violated a standing agreement with the US to not get close enough to threaten US troops on the ground,” an American official told NPR Tuesday. “US forces responded with a show of force using aircraft to demonstrate the forces were prepared to defend themselves, as well as communication with the Turkish military through formal channels to protest the risk to US forces.”

So, no, US troops aren’t out of harm’s way, Mr. President. Just ask your own officials.

Trump goes on to say that “as two countries fight over land” — Turkey and Syria — it “has nothing to do with us.”

That’s not true: That fight wouldn’t have happened if the US hadn’t suddenly withdrawn its troops from Syria’s northeastern region. Experts say they served as a buffer and tripwire that kept Turkish forces out of the country, even though President Recep Tayyip Erdogan has long wanted to kill Kurds along Turkey’s southern border.

With that American buffer now gone, Turkey has come in — which means the Turkey-Syria war has everything “to do with us.”

Finally, if this situation has absolutely nothing to do with America, then why did Trump’s administration sanction Turkey over its invasion? It’s a question even staunch Trump ally Sen. Lindsey Graham (R-SC) has.

More GRAHAM on Trump: “If you’re not concerned about Turkey going into Syria why did you sanction Turkey?”

You’ve got to be kidding.

We know that at least 130,000 people have already been displaced from northern Syria, hundreds have been killed or wounded since Turkey’s invasion last week (though it’s unclear exactly how many), and Turkish forces have attacked hundreds of targets. Syrian Kurdish fighters were so concerned for their safety that they joined up with Syrian President Bashar al-Assad — a brutal dictator — just because his forces would confront Turkey.

There is just no way the Kurds are safer now. They are literally fighting for their lives.

Now, Trump’s point that the Syrian Kurds aren’t “angels” is somewhat fair, as some of them clearly have ties to the Kurdistan Workers’ Party (PKK), which has long violently fought for autonomy inside Turkey.

But it’s a careless thing to say. After all, Syrian Kurds were America’s most dependable and capable allies in the ground fight against ISIS. Without them, the Trump administration would’ve been unable to relieve ISIS of 100 percent of its so-called caliphate in Iraq and Syria.

So what Trump has effectively done here is lambast a key American ally for no real reason, other than perhaps to make himself feel better for abandoning them last week.

“I view the situation on the Turkish border with Syria to be, for the United States, strategically brilliant.”

This is wrong, for all the reasons laid out above. But let’s be even more clear about why Trump’s rosy depiction isn’t accurate:

If that is strategic genius, then I’m George Clooney.

“By the way, every player hates ISIS. Everybody we’re talking about: Syria more than us. Russia more than us. They’ve done a big number on Russia. … They’re over there fighting ISIS, too. They can handle it.”

There’s some truth in this statement, but it’s still wildly misleading.

No one, including Russia and the Assad government in Syria, wanted ISIS to gain permanent control in Syria and Iraq, and the group had few, if any, real allies in the world. Plus, ISIS did promote and carry out attacks in Syria and Russia.

But the Assad regime also bears significant responsibility for the rise of ISIS in the first place.

And the main fighting forces against ISIS were clearly the US, the Syrian Kurds, and other members of the US-led coalition. Russia and Syria weren’t a part of that coalition, and instead focused most of their time fighting off rebels that wanted to overthrow Assad. In fact, Russia spent a lot of time bombing hospitals that mainly treated civilians more than it did destroying the caliphate.

To believe that Assad and Russian President Vladimir Putin would team up to fight ISIS and win without America’s military ability isn’t actually believable. And even if they did, they would do so with much less regard for civilian casualties than the US.

Trump, however, is unswayed.

In a press conference alongside the Italian leader shortly after his White House tirade, Trump suggested several times — without any evidence — that the Syrian Kurds purposely let the escaped ISIS-affiliated prisoners out “to make a little political impact,” perhaps to make Trump look bad or to convince him not to withdraw US forces.

It’s a line Trump has been repeating for days. But, of course, it’s not true, as a senior defense official told CNN two days ago.

In fact, Kurds withstood bombardment to continue guarding the posts in the first days of the Turkish incursion into Syria. But now that Ankara’s campaign has gotten more deadly, Kurdish fighters have said they can’t focus as much on keeping prisoners detained.

Since Trump’s decision allowed Turkey to invade and cause such chaos, one could make the case that the president is more responsible for escaped ISIS detainees than the Kurds are.

The Trump administration just imposed sanctions on Turkey for invading northern Syria. But it may be too late for America’s Kurdish allies.