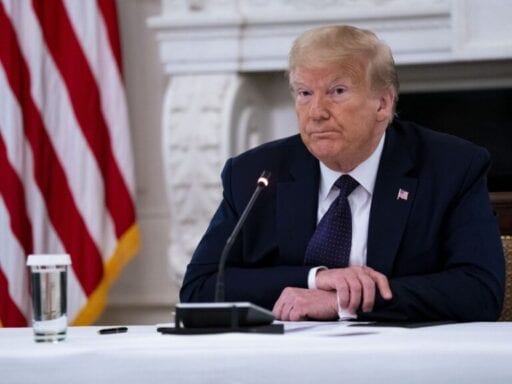 President Donald Trump makes remarks as he participates in a roundtable with law enforcement officials in the State Dining Room of the White House, June, 8, 2020, in Washington, DC. | Doug Mills-Pool/Getty Images

Martin Gugino is still in critical condition as the president tweets wildly unfounded claims about the man’s run-in with police.

President Donald Trump spread an unfounded conspiracy theory Tuesday, suggesting that a 75-year-old man who is in critical condition after he was shoved to the ground at a protest by Buffalo, New York, police on June 4 is actually an “antifa provocateur.”

“Buffalo protester shoved by Police could be an ANTIFA provocateur. 75 year old Martin Gugino was pushed away after appearing to scan police communications in order to black out the equipment,” Trump tweeted Tuesday morning.

Buffalo protester shoved by Police could be an ANTIFA provocateur. 75 year old Martin Gugino was pushed away after appearing to scan police communications in order to black out the equipment. @OANN I watched, he fell harder than was pushed. Was aiming scanner. Could be a set up?

The president was referring to a viral video of an incident showing police knocking over 75-year-old Martin Gugino while attempting to control protests against police violence in the western New York city. After being pushed by an officer, Gugino fell, appearing to hit his head on a sidewalk, and was ignored by dozens of officers as he bled from his ear, motionless.

Video of the incident has set off yet another controversy over police conduct amid anti-racism and anti-police brutality protests. A number of the protests have been marred by police violence that has led to the firing or arrests of officers in Atlanta and Louisville. The two officers who allegedly pushed Gugino — Aaron Torgalski and Robert McCabe — were arrested Saturday and charged with second-degree assault but were released without bail. Torgalski and McCabe have received a great deal of support from their colleagues: 57 officers from the department’s Emergency Response Team have since resigned to protest their arrest. Meanwhile, Gugino remains in serious condition.

As Vox’s Rebecca Jennings has explained, Gugino is a community organizer — Trump’s claim that Gugino may be an anti-fascist seems to have come from a broadcast from the right-wing One America News Network Tuesday morning, which cited an unfounded blog post on Conservative Treehouse (CTH) claiming Gugino was employing what OANN described as “an old trick used by antifa” to track police movements when he was pushed to the ground.

Here’s the first half of the batshit OANN segment Trump just tweeted. It alleges the 75 year old man assaulted by Buffalo police officers was an antifa operative, based on a report from Conservative Treehouse. pic.twitter.com/CeMVyJcoh8

The work of CTH’s original report appears to depend entirely on conjecture, inferring that Gugino was attempting to use an app on his phone to capture police communications on behalf of antifa because he has expressed “far-left views” on social media.

“In this slow motion video, you will see Gugino using a phone as a capture scanner,” wrote Conservative Treehouse blogger “sundancecracker.” “You might have heard the term ‘skimming’; it’s essentially the same. Watch him use his right hand to first scan the mic of officer one (top left of chest). Then Gugino moves his hand to the communications belt of the second officer.”

However, the CTH story doesn’t make any sense. Anyone with a police scanner app on their phone or access to a radio receiving police frequencies can listen in on police communications, which would be much more easily done from the safety of one’s home than through the complicated scheme floated by conservative conspiracy theorists.

It’s concerning that the president would be so eager to run with a conspiracy theory that originated with an unnamed blogger, but this is not the first time Trump — or OANN — has done such a thing.

Briefly, how OANN became one of Trump’s favorite news networks

OANN is a conservative news network available on DirecTV and Verizon’s Fios, and has pledged to loyally cover (and cover for) the president since he was a candidate in 2016. According to the Washington Post, Robert Herring, the owner of OANN corporate parent Herring Broadcasting, banned the network from broadcasting any campaign polls that showed Trump trailing in the presidential race in 2016.

The network’s coverage has only grown more pro-Trump since his election, and has enjoyed plenty of promotion from the president’s Twitter account, where he has cited it more than 20 times this year. Tuesday is far from the first time Trump has promoted an unfounded conspiracy theory that he saw on OANN, as explained by Vox’s Aaron Rupar:

One of the five times Trump has promoted OANN on Twitter over the past month was in reference to a segment featuring a discredited conspiracy theorist named Larry Johnson who reiterated an unfounded idea first pushed two years ago about the Obama administration “spying” on Trump’s campaign.

That tweet wasn’t the first time Trump spread fake news that originated with OANN. In October 2017, Trump — alluding to an OANN piece — tweeted, “Just out report: ‘United Kingdom crime rises 13% annually amid spread of Radical Islamic terror.’ Not good, we must keep America safe!” But the UK Office for National Statistics made clear that the crime data they compiled and released drew no connection between a rise in crime and “Radical Islamic terror,” other than to note that the murder rate was slightly higher because of deaths related to terror attacks in London and Manchester.

“The simple answer is that our statistical release bulletin yesterday made no link between terrorism and violent crime,” a UK Office for National Statistics spokesperson said about Trump’s tweet, in a statement.

Around that same time, OANN repeatedly attacked the credibility of women who came forward to accuse Republican US Senate candidate Roy Moore of sexual misconduct. More recently, OANN has come under scrutiny for pushing conspiracy theories about Planned Parenthood and uncritically spreading Russian disinformation about humanitarian workers in Syria.

Trump has never been shy about seizing on — and promoting — conspiracy theories that boost his own political narrative. In late May, he promoted a false accusation against MSNBC host Joe Scarborough, claiming he was involved in the death of a former staffer.

And, of course, his pursuit of the Crowdstrike conspiracy theory that a Ukrainian company — not Russia — hacked the Democratic National Committee servers in 2016 played a role in his impeachment in 2019. Beyond his tweets referencing incorrect OANN stories, Trump retweets supporters of the QAnon conspiracy theory (which posits prominent Democrats are part of a child sex trafficking ring) — some of whom have even begun running for federal office as Republicans.

It shouldn’t come as a surprise that a president who began his political career as the leader of the racist birther movement, which falsely claimed that former President Barack Obama was not born in the US and was thus ineligible for office, would deal so frequently in conspiracy theories. But it does mean the playbook Trump is now running against protesters is a familiar one.

Americans don’t approve of how Trump has handled the protests

Trump’s promotion of such theories seems to animate his base. But his impulse to latch onto them instead of focusing on governing seems as if it may have begun to affect his standing with voters — at least with regard to the latest wave of protests against police violence.

According to a Washington Post-Schar School survey of 1,006 adults taken June 2 to 6, 61 percent of Americans disapprove of Trump’s handling of the protests; only 35 percent say they approve. Additionally, 47 percent of Americans say they strongly disapprove of Trump’s response to the protests. The poll has a margin of error of 3.5 percentage points.

Other polls have had similar results, and they come as Trump has seen a recent dip in national electoral polls compared to his opponent, presumptive Democratic presidential nominee and former Vice President Joe Biden. These latest polls should be concerning to the president and his reelection campaign, but he is unlikely to see them on OANN.

Trump has already tried to discredit them, hiring McLaughlin & Associates — which has made some notable errors in performing GOP polling — to incorrectly claim they’re just a false flag operation.

…Crooked Hillary Clinton in 2016. They are called SUPPRESSION POLLS, and are put out to dampen enthusiasm. Despite 3 ½ years of phony Witch Hunts, we are winning, and will close it out on November 3rd! pic.twitter.com/4IhuLUZjsv