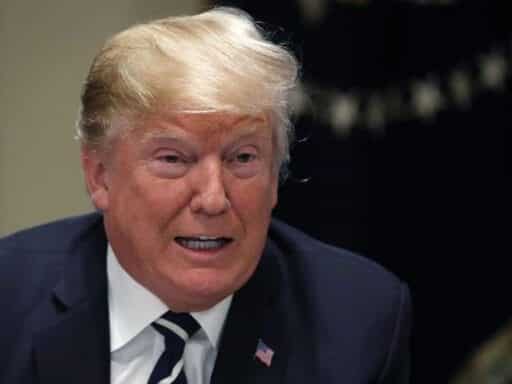 The president tries to fire back at critics with a false choice.

President Trump walked back his Putin press conference comments on Tuesday, claiming that his grammar was incorrect and he meant to say he didn’t see any reason why it wouldn’t be Russia meddling in US elections.

But on Tuesday night, Trump somewhat undermined his scripted apology, tweeting that the meeting between “President Putin and myself was a great success, except in the Fake News Media!”

Then on Wednesday morning, he followed up by tweeting that “people at higher ends of intelligence loved my press conference performance in Helsinki,” and the fact that he and the Russian leader got along “truly bothered many haters.”

So many people at the higher ends of intelligence loved my press conference performance in Helsinki. Putin and I discussed many important subjects at our earlier meeting. We got along well which truly bothered many haters who wanted to see a boxing match. Big results will come!

He wasn’t done: “Some people HATE the fact that I got along well with President Putin of Russia,” he tweeted a few hours later. “They would rather go to war than see this. It’s called Trump Derangement Syndrome!”

Some people HATE the fact that I got along well with President Putin of Russia. They would rather go to war than see this. It’s called Trump Derangement Syndrome!

Trump, in general, does not like to concede to his critics, and it’s not surprising that he’s bristling a bit at the pushback (and bad reviews) from his Russia trip, even from his close allies and Fox News. But his hyperbolic defense — war, or work with Putin — is questionable.

Some foreign policy experts have argued that Putin’s interference in the 2016 elections is akin to an act of war — updated to the 21st century. At the very least, the bipartisan consensus is that Russia’s attempts to insert itself into America’s electoral process represented an act of aggression and a threat to democracy.

The US government — and Trump’s own administration — has retaliated with sanctions, for example. And beyond the election interference, tensions with Russia have escalated geopolitical conflicts in places such as Syria in recent years.

But as the New Yorker’s Susan Glasser pointed out before the Helsinki summit, the purpose of Trump’s meeting with Putin wasn’t even really clear, as the two sides hadn’t agreed to any “deliverables” ahead of the sit-down. Trump and Putin then met privately, so, unless something leaks, the contents of their nearly two-hour discussion are unknown. And besides a vague Russian pronouncement about an “agreement on international security” and Trump’s assertion that Russia will help on North Korea, it’s not clear what tangible objectives were achieved.

Maybe that will change in the coming days. Dialogue with Putin isn’t a bad thing — but not pressing Putin on areas where he’s hostile to US interests and on his penchant for election meddling is. Diplomacy isn’t an all-or-nothing proposition — and getting along with an adversary for the sake of getting along isn’t exactly a foreign policy position. That’s what Trump’s critics are pushing back on.

What’s more, Trump’s elevation of Putin — as a world leader on par with that of the US — is exactly what the Russian strongman wanted. It’s not winning war, exactly, but it’s a victory for Putin nonetheless.

Meet the medieval Welsh poet who wrote odes to her vagina
Nevada promises its caucuses will go better than Iowa’s
Democrats’ new accusation that Trump violated federal bribery law, explained
Why people are mad about a list of Trump donors online
25 cartoons to get obsessed with, now and forever
Anne Hathaway’s thoughts on Nia Wilson’s murder are really worth reading