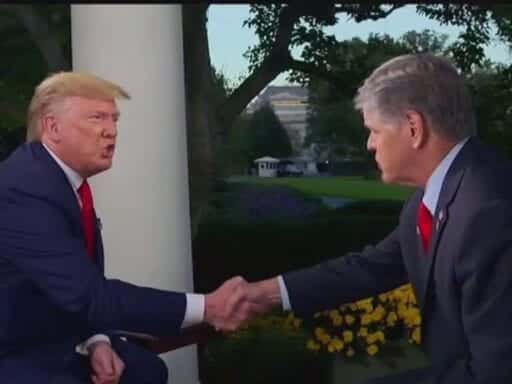 The central tenet of Trumpism is to never sit one out. Trump’s latest love-fest with Hannity illustrated it.

One day after caving to public pressure and reversing course on his plan to host next year’s G7 at a resort he owns, the president who broke decades of precedent by refusing to divest from his business interests tried to turn “corruption” into a line of attack against one of his political rivals.

During an hour-long interview on Monday’s installment of Hannity, President Donald Trump claimed that if his sons Donald Jr. and Eric accepted payments from “questionable” foreign sources, “it would be the biggest story of the century.”

But Trump’s suggestion is the height of hypocrisy. The Trump Organization — a business the president still owns and profits from while it is ostensibly being run by Donald Jr. and Eric — does indeed accept payments from questionable foreign sources.

Trump made that statement after pushing unfounded conspiracy theories about Hunter Biden, son of Democratic presidential candidate Joe Biden, who seemingly leveraged his family name to a $50,000-a-month gig on the board of a Ukrainian natural gas company while his father was vice president. Trump’s suggestion was that the Bidens had benefited from a form of corruption that would be unthinkable for his family. But that just isn’t the case.

For instance, just weeks ago, Forbes reported that Eric and Donald Jr. have sold more than $100 million of the family’s real estate since the January 2017 inauguration — including a $3.2 million deal in the Dominican Republic last year that is “the clearest violation of their father’s pledge to do no new foreign deals while in office.” Foreign money has also poured into the Trump International Hotel, located just blocks from the White House, which the president’s most recent financial disclosure indicated made him $41 million last year alone.

In August, the New York Times reported that a $1.7 billion Trump Organization project in Indonesia received a $500 million infusion from a state-owned Chinese construction company. And it’s not just Eric and Donald Jr.: Ivanka Trump, despite working in the White House, continues to do business in China as well, and her husband, White House adviser Jared Kushner, received a massive cash infusion from Qatar last year.

Innumerable examples of the hypocrisy involved in Trump attacking the Bidens for foreign business dealings are at hand. To cite another glaring instance, despite Trump’s denials that he has “NO DEALS” in Russia, Donald Jr. claimed in 2008 that “Russians make up a pretty disproportionate cross-section of a lot of our assets. We see a lot of money pouring in from Russia.” Trump could clear up the discrepancy by releasing his tax returns, but he refuses to do it.

Earlier this year, the Trump Organization announced it provided the Treasury Department with nearly $200,000 to cover the amount they say they’ve made from foreign governments during the Trump presidency. But it’s completely unclear how the president’s company arrived at that figure.

If you expected Sean Hannity to press Trump on any of this, however, you would have been sorely disappointed. The Fox News host has a long history of conducting fawning interviews with Trump that fail to generate much news, and Monday was no exception.

To close the interview, for instance, Hannity teed up this softball for the president: “I’ve known you for a long time — you thrive on battle, you thrive on fighting, you said to me privately, and publicly, you want your promises fulfilled, and I guess that’s what reelection is going to be about. With all this ‘impeach, impeach’ going on, do you care? Would you care at all what they do, as long as you win in November?”

Trump didn’t even pretend to try to answer that question, but instead started rambling about China and Hillary Clinton. And at another point, Hannity went as far as to help Trump finish his thought as he struggled to remember the name of the Obama-era “Fast and Furious” scandal.

Trump claims that Obama could’ve been impeached “for the guns for whatever, where guns went all over the place and people got killed with the guns.” pic.twitter.com/CCeuuYoLeN

In short, the interview illustrated the extent to which Fox News functions as an unofficial arm of the Trump administration. It was a piece of public relations more than it was journalism.

The Trump family attacking the Bidens for corruption is like the Cookie Monster going after someone for liking Mrs. Fields

Perhaps nothing better illustrates the sheer shamelessness of the Trump family than their efforts to make “corruption” a central issue in the 2020 campaign.

Trump’s comments to Hannity came on the heels of both Donald Jr. and Eric Trump displaying a stunning lack of self-awareness during Fox News interviews in which they pretended, absurdly, as though the idea they’ve benefited from nepotism or are exploiting their father’s administration for profit is unthinkable.

An actual quote from Don Jr about Hunter Biden: “When you’re the father and your sons entire career is dependent on that, they own you” pic.twitter.com/KABtg5XzSa

Eric Trump asks the rhetorical question, “could you imagine” if I was profiting off the presidency? pic.twitter.com/7tp6Dww2aB

Of course, a central tenet of Trumpism is to never to pass up an opportunity to attack your political foes, even if you’re guilty of the exact thing you’re accusing them of and then some. As a result, Eric Trump apparently feels no shame about, for instance, posting a tweet bashing Hunter Biden for his alleged profiteering from corruption, following it up in his very next post by bragging about a new Trump Organization development in Scotland — and then the next day attacking Democrats for alleged “hypocrisy.”

And Fox News lets them get away with it.

Captain Marvel’s 2 end-credits scenes, explained
“Failed” abortions, a period-tracking spreadsheet, and the last clinic standing: the controversy in ...
Trump endorsed one of his critics. Will it be enough to help her win her runoff in Alabama?
Lawmakers are very upset about this week’s massive Twitter breach
Trump’s continued indolent response to Hurricane Maria is our worst fears about him come true
The Batman’s trailer seems like another grim take on the hero. That’s not necessarily a bad thing.