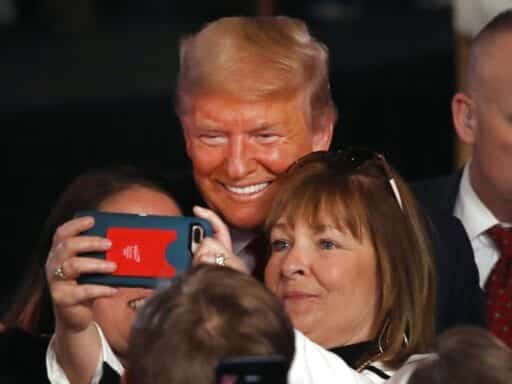 “I have to say, people are now staying in the United States, spending their money in the US — and I like that.”

One night after an interview with Sean Hannity in which he cited a “hunch” to make a case that the coronavirus mortality rate is actually far lower than the one identified by the World Health Organization (WHO), President Donald Trump was back on Fox News Thursday night once again misleading people about the public health crisis caused by the virus.

During a Fox News town hall on Thursday, Trump tried to find a silver lining to the coronavirus crisis by saying people feeling compelled to stay home isn’t all bad.

“I have to say, people are now staying in the United States, spending their money in the US — and I like that,” Trump said when asked about the impact that people avoiding travel will have on the economy. “You know, I have been after that for a long time. You know that. I have been saying, ‘let’s stay in the US, spend your money here’ — and they are doing that. They’re sort of enforced doing that.”

As cases spread across the country and the administration comes under fire for still not making a sufficient amount of coronavirus tests for hospitals and health departments, Trump used the event in Scranton, Pennsylvania, to do a bit of public relations.

But a lot of what he said was dubious at best.

Trump tries to find a silver lining to the coronavirus during Fox News town hall: “I have to say, people are now staying in the United States, spending their money in the US — and I like that.” pic.twitter.com/lbERhrSq6t

On Thursday, Southwest Airlines CEO Gary Kelly told CNBC that “we’re 97 percent domestic, so what we’re seeing is a drop off in domestic travel. … It has a 9/11-like feel.”

More importantly, considering that the coronavirus death toll is now at 14 in the US and more than 2,700 people are currently quarantined in New York City alone, Trump’s comments will come as cold comfort to those concerned about loved ones or themselves. But they reflect how he’s consistently tried to deflect from legitimate questions about the government’s handling of the outbreak.

The very first question Trump fielded during his town hall was about how the government is planning for the possibility of long-term disruption from the coronavirus. But instead of answering the question, Trump insisted they’re doing a good job.

“We’ve [been given] I think really given tremendous marks — you look at Gallup poll and other polls — for the way we’ve handled it,” Trump said citing an outdated poll from early February, before the virus was known to be spreading in the US. “And one of the things I did is I closed the borders to China and to other areas that are badly affected and really having a lot of troubles … so we were really given tremendous marks for having made the decision — that was a decision I made — to close down the border.”

Trump repeatedly commended himself for the move to restrict travel from China as the outbreak initially spread there earlier this year. But public health experts say he’s missing the point — the important thing now that the virus is already spreading here in the United States is to get a sense of its scope and work on containment.

Trump has tried to minimize the problem, while the federal government has failed to provide resources so localities can test everyone who should get tested.

Along those lines, Trump claimed during the town hall that as of “right now” there are only “149 cases” in the United States. Given the number of deaths and people who are under quarantine, that figure is almost certainly a dramatic underestimation. But for Trump, the upside of people not getting tested for coronavirus is that it allows him to pretend that everything is already under control — even if doing so is dangerous in a situation where the public still doesn’t understand the full scope of what’s going on.

Trump was asked what health care plan he plans to rally Republicans around during the 2020 campaign. He replied with a word salad that indicated he still thinks Obamacare is a form of health care instead of a law that provides subsidies so that people who otherwise might not have access to health care can get covered.

Here’s a transcription of his remarks, followed by the video:

First of all, I got rid of the individual mandate which was the worst part of Obamacare — that’s where you paid fortune, not to pay for horrible health care, insurance. It had a tremendous impact. Preexisting condition 100 percent we take care of. But we have many health care plans now where it’s 60 percent, even 65 percent less expensive than Obamacare. It is better than Obamacare. And what we really have left is the carcass of Obamacare or you could call it, new health care. Because without preexisting — without the whole thing of the individual mandate, it’s a whole different ballgame, it’s a much different plan. What we would like to do is totally kill it but come up — before we do that, with something that’s great.

What we’ve done is really managed Obamacare, the remaining portion. We got rid of the bad part, but the remaining portion, really well. And you know, before I got involved, you know what’s happening with the rates on Obamacare? They were going up at levels that nobody has ever seen before. We are managing it.

And I had a decision to make, this was very important. I said to my people. We have great people — Seema [Verma], [Alex] Azar — I mean, great people that are so good at it. I said, ‘you know, I have a little problem — do we manage it great, until we have something much better? Or do we manage it poorly and say Obamacare is horrible?’ And I said, ‘we’ve got to do the right thing, we’ve got to manage it really, really good.’

So, It’s not great health care, but we are managing it fantastically, and you don’t see all the stories about the rates going through the roof anymore because we know where doing. At the same time, we want to get you really fantastic health care. If we can win back the House, we will be able to do that. We have to win back the House, keep the Senate, keep the White House.

Trump still seems to think “Obamacare” is a form of health care. He then promises Republicans will unveil a plan for “really fantastic health care” if they retake House. (They had total control in ’17 and that produced a proposal that would’ve stripped coverage from 20+m people) pic.twitter.com/G3vRQJQtVu

But while Trump may want people to believe that total Republican control of the federal government will produce “fantastic” health care legislation, it’s worth remembering that Republicans did have total control of the federal government in 2017 and ’18. And instead of improving America’s health care system, the failed bill Republicans produced and that Trump championed would’ve stripped coverage from tens of millions of people, many of them with preexisting conditions.

It is also not the case that Trump has done anything to make health care more affordable — private insurance costs are skyrocketing, and the average premium for family coverage under employer-sponsored health plans broke $20,000 for the first time last year.

Fox News anchor Martha MacCallum followed up by asking Trump how he can claim he’s committed to protecting preexisting conditions when his administration is currently preparing to argue before the Supreme Court that Obamacare should be repealed. Trump responded by pretending his administration actually isn’t involved in the case (it is) and insisted that Republicans, despite all evidence to the contrary, are committed to making sure that people with preexisting conditions have coverage.

We want to terminate Obamacare, because it’s bad. Look, we are running it really well but we know it’s defective — it’s very defective. We got rid of the worst part, and that was a very important thing. You know, getting rid of the individual mandate was a very important thing. But if we can get the House, you will have the best health care, health insurance, anywhere on the planet. But we have to get the house back. Now, that means we do hold the Senate, we have to get the House, we have to obviously keep the White House.

But what we are doing is managing it really well. Now, it’s a case — it’s called Texas — you understand, it’s Texas is suing, and they want to terminate it … so, Texas and many states they are trying to terminate, but they want to put something that is much better. They’re terminating it to put much better and they’ve all pledged that preexisting conditions are 100 percent taken care of.

Trump’s comments reveal that more than three years into his presidency, he still doesn’t have a health care plan. Then again, as his coronavirus remarks made clear, not having plans is sort of Trump’s thing.

Birthright citizenship is the third rail of immigration politics
The Dixie Chicks make their triumphant return with the kiss-off anthem “Gaslighter”
The Democratic primary has a legitimacy problem
How Alison Roman became the reluctant, pasta-loving “prom queen of the pandemic”
A Texas Supreme Court decision could disenfranchise millions during the pandemic
A federal judge stopped Texas from ending its refugee program