Trump vents about impeachment in wild letter to Nancy Pelosi 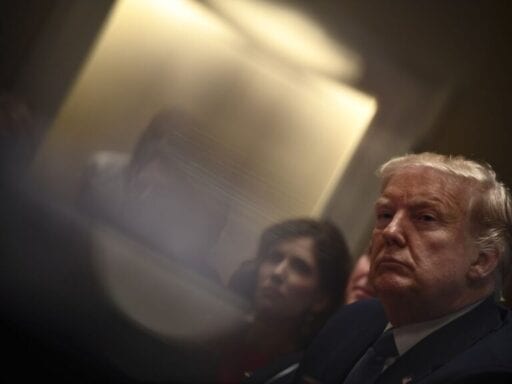 The president is getting all of his feelings out on the night before the impeachment vote.

On Tuesday, the eve of the House’s historic impeachment vote, the president sent a rambling, exclamation point-laden letter to House Speaker Nancy Pelosi in which he rages at her and House Democrats, accusing them of pursuing an “invalid” and partisan impeachment inquiry against him.

“The Articles of Impeachment introduced by the House Judiciary Committee are not recognizable under any standard of Constitutional theory, interpretation or jurisprudence,” Trump writes. “They include no crimes, no misdemeanors, no offenses whatsoever. You have cheapened the importance of the very ugly word, impeachment!”

More than 700 historians and legal scholars have written to the House in support of impeachment, and three of the four law professors who appeared before the House Judiciary Committee testified that Trump’s attempts to pressure Ukraine to investigate his 2020 political rival rose to the level of impeachment.

Yet Trump, who we should note is not a constitutional scholar, asserts that House Democrats are breaking their allegiance to the Constitution and “declaring open war on American Democracy.”

“You dare to invoke the Founding Fathers in pursuit of this election-nullification scheme — yet your spiteful actions display unfettered contempt for America’s founding and your egregious conduct threatens to destroy that which our Founders pledged their lives to build,” the president writes.

Trump goes on to address both articles of impeachment against him: abuse of power and obstruction of Congress.

In defending himself against abuse of power — specifically, withholding military aid and a White House meeting to pressure Ukraine to open investigations into the Bidens — he again claims his call with Ukrainian President Volodymyr Zelensky was “totally innocent” and “perfect” and that the conversation “has been misquoted, mischaracterized, and fraudulently misrepresented.”

“I said to President Zelensky: ‘I would like you to do us a favor, though, because our country has been through a lot and Ukraine knows a lot about it.’ I said do us a favor, not me, and our country, not a campaign.” (The words “us,” “me,” and “our country” are all underlined in the letter.)

Of course, Trump is himself mischaracterizing the actual conversation he had with Zelensky by leaving out the part of the White House’s readout of the call where he asks Zelensky to “look into” the false allegation that Joe Biden, as vice president, got a Ukrainian prosecutor fired to thwart his investigation into Burisma, the Ukrainian gas company Biden’s son Hunter served on the board of.

In reality, Biden pushed for that prosecutor, Viktor Shokin, to be fired because he wasn’t doing enough to investigate corruption in Ukraine. And it wasn’t Biden’s idea — it was an official Obama administration policy decision that was supported by several of America’s Western allies. Nevertheless, Trump repeats these (again, false) allegations against Biden in his letter.

Trump also cites Zelensky’s statements that he did not feel pressured by the US president. That’s true: Zelensky has, in fact, said this — something that Republicans have repeatedly cited as proof Trump did nothing wrong. Democrats, on the other hand, argue Zelensky is only saying this because he and his country are still reliant on US aid to fend off Russia and don’t want to go against Trump publicly.

On the obstruction of Congress charge, which he calls “preposterous and dangerous,” Trump argues he was merely “asserting Constitutionally based privileges that have been asserted on a bipartisan basis by administrations of both political parties throughout our Nation’s history” — though he fails to specifically mention that his administration has blocked subpoenas and document requests by the House.

There’s more in the letter — oh, so much more. But all of it is stuff Trump has previously said over and over at rallies, on Twitter, and anywhere else he happens to be.

He accuses Democrats of both trying to undo the 2016 election and trying to stop him from winning in 2020 because they don’t have a response to his accomplishments.

He (accurately) notes that some House Democrats have floated impeachment long before this Ukraine scandal broke. (Of course, there have been legitimate concerns about Trump’s presidency before now, including the obstruction of justice findings in special counsel Robert Mueller’s report, but he leaves that part out).

The letter is Trump unleashed, but it’s only a certain level of alarming, given that we’ve heard all of this before. However, it does make one thing extraordinarily clear: Trump is not pleased to be joining the list of presidents who’ve faced impeachment.

At least he got a chance to vent his feelings for the record. “It is time for you and the highly partisan Democrats in Congress to immediately cease this impeachment fantasy and get back to work for the American People,” Trump ends his letter. “While I have no expectation that you will do so, I write this letter to you for the purpose of history and to put my thoughts on a permanent and indelible record.”

“One hundred years from now, when people look back on this affair, I want them to understand and learn from it, so that it can never happen to another President again.”