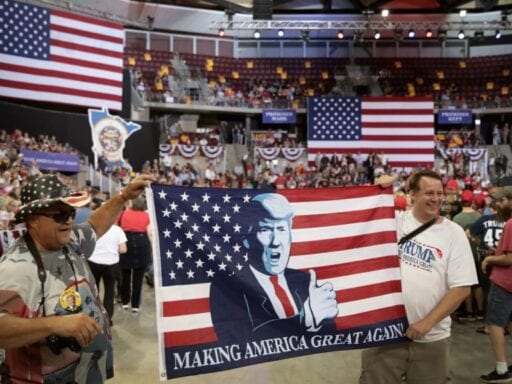 Donald Trump backed away from his controversial policy that led to the separation of families at the US border — but if the president faced a public setback, it didn’t break through in a packed and raucous arena in Duluth, Minnesota.

Trump was in familiar form at his campaign rally, running through his usual hits blasting the fake news media, the Democrats, the Russia witch hunt, and Hillary Clinton, and boasting about the economy, jobs, and how America is finally respected again.

With the still-swirling controversy around Trump’s “zero tolerance” immigration policy, Trump quickly mentioned family separation, but didn’t stick with the topic for long.

“By the way, I signed an executive order, we’re going to keep families together,” Trump said. “But the border is going to be just as tough as it’s been.”

“Democrats don’t care about the impact of uncontrolled migration on your communities, your schools, your hospitals, your jobs, or your safety,” Trump added. “Democrats put illegal immigrants before American citizens. What the hell is going on?”

Trump also returned, for the second time this week, to the inflammatory immigration comments he made to kick off his campaign in 2015.

“They’re not sending their finest,” Trump bellowed. “And we’re sending them the hell back.”

Trump was in his comfort zone — and the crowd obliged

Trump blasted open borders and the Democrats and MS-13, but he only quickly brought up his “zero tolerance” immigration policy — a sign, perhaps, that even Trump recognized the toxicity of the issue.

Reporters spoke to rally attendees ahead of the campaign event, and the reactions ranged from outright support to Trump’s favorite comeback: “fake news” to opposition to family separation. But most absolved Trump of any blame, a reflection of the administration’s spin.

“President Trump is a sensitive person, and he does not like that the children are being taken,” Louis Bergeron, an 80-year-old from Wisconsin told WCCO, a radio station based in Minneapolis. “But actually, they’re coming here illegally, and in this country, anyone who breaks the law has to go to jail and the kids are separated. He’s actually trying to make Congress do their job and pass a law and eliminate loopholes, eliminate these people coming here expecting freebies.”

Marci, a mother, grandmother and Trump supporter, said she’s happy President Trump ended his policy of separating families. It’s good that he can admit when he’s wrong, she told me. Most supporters I’ve talked to in Duluth, Minn. agree with her stance. pic.twitter.com/8Pb0By9CeH

Common theme: A Trump supporter in Duluth, one of many waiting in a long line outside tonight’s rally location, just told me she has compassion for separated families but ultimately believes that the detainment center photos and videos are fake and photoshopped.

Have gotten a range of responses about child separations from Trump supporters in Duluth today. Some say it’s terrible, some say it’s fake news. All agree though that it isn’t Trump’s fault

All of which meant Trump was clearly on his home turf Wednesday night. Even when protesters interrupted him (“Go home to your mom, darling,” Trump said to one), the crowd quickly drowned them out.

“Truth isn’t truth”: Rudy Giuliani offers a new explanation of why Trump shouldn’t talk to Mueller
8 experts on why the Paul Manafort jury doesn’t have a verdict yet — and what it might mean
The multibillion-dollar business of sheltering migrant children, explained
Report: Pentagon goes on offensive in cyber warfare
The John Travolta Gotti movie is waging a Trump-style war on critics
EPA Administrator Scott Pruitt's ethical challenges piling up; many involve lavish spending