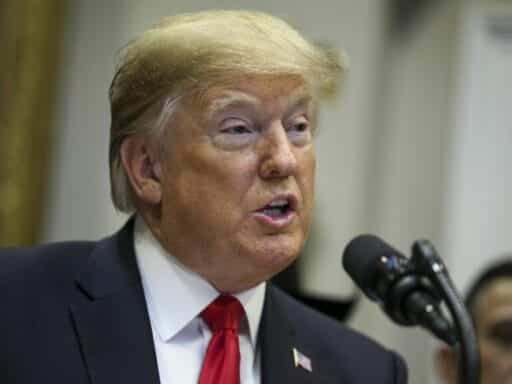 But not at the expense of American companies.

Facing mounting pressure to confront the Saudi government over the shocking disappearance and possible murder of Saudi journalist Jamal Khashoggi, President Donald Trump vowed “severe punishment” for whoever is responsible — once the United States concludes its investigation.

In a 60 Minutes interview that will air Sunday, Trump told Lesley Stahl that the US is looking at the case “very strongly,” but does not have any leads on whether Saudi Arabia is behind Khashoggi’s vanishing. Turkish officials have reportedly told their American counterparts that they have audio and video recordings proving that Khashoggi, a Saudi dissident and Washington Post columnist, was tortured and killed inside the Saudi consulate in Istanbul earlier this month.

“We would be very upset and angry if that were the case. As of this moment, they deny it, and they deny it vehemently,” Trump said.

Later, Trump added, “We’re going to get to the bottom of it, and there will be severe punishment.”

Khashoggi, who was a US resident living in Virginia on self-imposed exile, was last seen entering the Saudi consulate in Turkey on October 2 to file some paperwork for his upcoming marriage. His fiancée, who was waiting for him outside, told Turkish media and local authorities that she never saw him exit.

Trump, who first spoke out about the journalist’s disappearance nine days after he was reported missing, told reporters Friday evening that he plans to call Saudi Arabia’s king “at some point” to discuss the journalist’s mysterious vanishing.

“We’re going to find out what happened with respect to the terrible situation in Turkey having to do with Saudi Arabia and the reporter,” Trump said. “And nobody knows quite yet. Nobody’s been able to put it all together. People are starting to form ideas … but it’s certainly a terrible thing.”

Crown Prince Mohammad Bin Salman’s possible order to kill, dismember and disappear Khashoggi is not only fraying the country’s already fraught relationships in the region, it’s also straining its strong bonds with the Trump administration and US industry. Several US media groups and business leaders have pulled out of a major Saudi investment conference, and say they won’t attend while the mystery remains unexplained.

Trump, however, appears reluctant to let go of his strong affinity for the Middle Eastern nation — and the cash it’s willing to spend in the US. Riyadh said in April it would invest $20 billion in US infrastructure, fulfilling the president’s promise — one he’s made repeatedly as far back as the State of the Union address — to rebuild America’s crumbling roads, bridges and airports. Last May, Trump also expressed a desire to sell $110 billion worth of weapons and armory to the Saudis — a desire he appears to not be willing to let go of for the price of a human life.

“This took place in Turkey and to the best of our knowledge, Khashoggi is not a United States citizen,” Trump told reporters in the Oval Office on Thursday. “I don’t like stopping massive amounts of money that’s being poured into our country.”

As Vox’s Alex Ward puts it, “It’s perhaps one of Trump’s most honest articulations about how he conducts foreign policy.”

He won’t call out a country that infringes upon human dignity as long as it’s willing to inject cash into the American economy. And it’s especially fine if the affected people aren’t US citizens.

Trump may have promised to hold Riyadh responsible for Khashoggi’s alleged killing, but not if it means “punishing” American companies and defense contractors, too. He told Stahl in the 60 Minutes interview that he won’t go as far as to impose sanctions on Saudi Arabia, as a bipartisan group of senators proposed this week.

Two movies that celebrate Ruth Bader Ginsburg
How Trump’s mail voting sabotage could result in an election night nightmare
Eating indoors is risky for diners. It’s even riskier for chefs and waiters.
A black 12-year-old was mowing a lawn. So someone called the police.
The 13 Democrats running for president and everything else you should know about 2020
Psychologists surveyed hundreds of alt-right supporters. The results are unsettling.