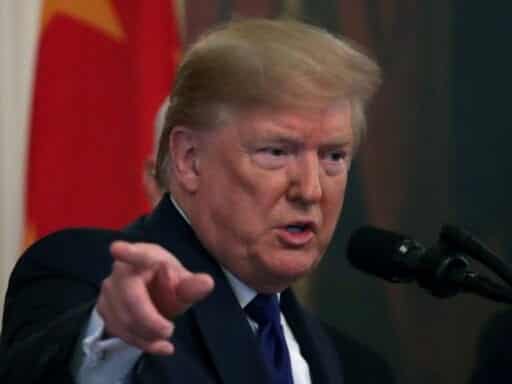 Share
Loading...
President Donald Trump speaks before he and Chinese Vice Premier Liu He signed “phase one” of a trade deal between the US and China on January 15, 2020. | Mark Wilson/Getty Images

A new book by Washington Post reporters has the disturbing revelation.

Shortly after taking office, President Donald Trump grumbled to his secretary of state about a decades-old US law that bars American companies from bribing foreign officials and pledged to repeal it — which, incidentally, would make it easier for his company to get lucrative contracts abroad.

This comes from a new book by Washington Post reporters Philip Rucker and Carol Leonnig, who won a Pulitzer Prize as part of a larger team covering Trump and Russia, titled A Very Stable Genius: Donald J. Trump’s Testing of America. The book comes out next week, but their paper (unsurprisingly) got an advance copy and published some of the more eye-popping tidbits on Wednesday.

The most jarring is a scene from spring 2017, when Trump and then-Secretary of State Rex Tillerson tussled over the Foreign Corrupt Practices Act of 1977. That law, according to the Justice Department, makes it “unlawful for certain classes of persons and entities to make payments to foreign government officials to assist in obtaining or retaining business.”

“It’s just so unfair that American companies aren’t allowed to pay bribes to get business overseas,” Trump reportedly told Tillerson. “We’re going to change that.” Per the authors, the president expressed frustration “ostensibly because [the law] restricted his industry buddies or his own company’s executives from paying off foreign governments in faraway lands.”

“Ostensibly” is an important modifier here: It’s unclear whether Trump was explicit in his anger that his company couldn’t bribe foreigners, or if that is just the authors’ interpretation of his comments. Given his desire to make US companies more competitive in the global market, it’s certainly possible Trump had that in mind more than his personal fortune.

Either way, it says a lot about the president that he spent any amount of time in power advocating for more corruption and bribery, not less — particularly since he’s been trying to convince the American people that he’s an anti-corruption crusader as part of his impeachment defense.

That defense was always a bit hard to swallow for anyone who has been paying attention to Trump since, well, basically forever, but this anecdote just further illustrates how little Trump cares about fighting corruption in foreign countries. If anything, he seems to want more corruption.

This revelation on its own is explosive, but there are others worth noting in the book.

Trump’s infatuation with Russian President Vladimir Putin is well chronicled, but Rucker and Leonnig’s work shows Trump was champing at the bit to meet the dictator even before he officially took over the White House:

“During the transition he interrupt[ed] an interview with one of his secretary of state candidates,” Rucker and Leonnig write. He cut in to ask: “When can I meet Putin? Can I meet with him before the inaugural ceremony?”

Trump finally got the chance to meet with Putin at the 2017 G20 summit in Hamburg. After their talk, the authors write, the president considered himself a newly minted Russia expert — more so than Tillerson, who spent years doing business in Russia and interacting with Putin during his decades at ExxonMobil.

And during an undated meeting with Indian Prime Minister Narendra Modi, Trump made clear he was not brushed up on geography, telling the leader that the threat from China isn’t so bad since “It’s not like you’ve got China on your border.”

The problem is that India does, in fact, have China on its border.

According to one Trump aide who spoke to the reporters for the book, Modi was likely left gobsmacked by that meeting. “This is not a serious man. I cannot count on this man as a partner,” the aide characterized Modi as thinking. The aide noted that afterward, “the Indians took a step back” in their relationship with the US.

Put together, these excerpts paint a picture of a selfish, impetuous, astoundingly uninformed president potentially willing to commit crimes to get ahead. If all of this is true, it bolsters the case that Trump is a truly unfit president.