Trump wants to cut taxes for rich people yet again 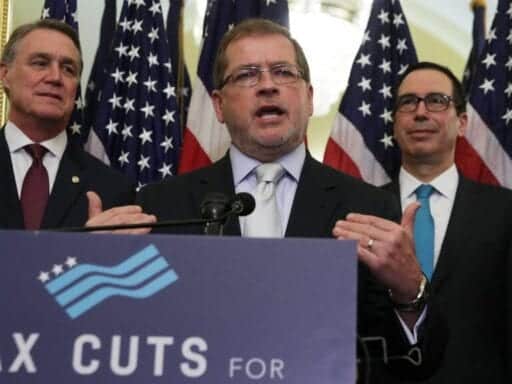 Indexing capital gains to inflation, as Trump is considering, would overwhelmingly benefit the top 1 percent.

On Friday, President Donald Trump used his favorite public platform to hint at a policy change that his administration has been weighing for at least a year: using presidential power to unilaterally lower taxes for investors.

On Twitter, Trump linked to an op-ed by Sen. Ted Cruz and veteran anti-tax crusader Grover Norquist calling on the administration to index capital gains to inflation. Currently, they explain, if you bought a share of stock in 1998 for $30 and sold it this year for $40, that would count as $10 in long-term capital gains for federal tax purposes. But adjusted for inflation, $30 in 1998 is about $46.79 now, so you’d be paying taxes on an investment that, adjusted for inflation, lost money.

That’s the basics of the case in favor of the change: taxing inflation is, proponents of the shift argue, unfair, and hurts the economy by discouraging investment. The case against indexing to inflation is much simpler: This is a change that would overwhelmingly benefit the richest Americans, who own an overwhelming share of the stocks, real estate, and other capital whose sales would be affected. One estimate finds that 86.1 percent of the benefit would go to the richest 1 percent.

More concerning still, some legal scholars believe that executing this change through the executive branch is illegal, and that congressional action would be necessary to do this — action that, with Democrats in control of the House, will probably never come.

What indexing capital gains for inflation would do

By contrast, the top rate on wage income is 37 percent, meaning capital gains income from wealthy people gets taxed at as little as half the rate of their wage income.

There are a few rationales for indexing these gains for inflation, but one of them is the fact that long-run capital gains have their value eroded somewhat by inflation. If you buy a stock for $40 and sell it for $60 five years later, some of the gain in value is just that prices have risen across the economy.

As UChicago’s Daniel Hemel and NYU’s David Kamin explain in a recent paper on indexing, the current structure “affords a lower statutory rate for capital gains as a sort of ‘rough justice’ that partially accounts for inflation.” This tradeoff — no indexing but lower rates —makes particular sense now, as inflation has been low (around or below 2 percent) and stable for decades. It’s a normal cost that businesses can plan around, and that the tax code can offset, rather than an unpredictable danger.

Some tax experts, including Hemel and Kamin and the Tax Policy Center’s Len Burman, argue that this combination of lower rates with no indexing could be preferable to higher rates plus indexing (weighed by some tax reformers) for administrative reasons. What if, say, the capital gain comes from a house that you renovated? You would have to keep track of not just when you bought the house and the underlying land, but when you purchased new sinks, when you hired contractors to install them, when you had people in to add insulation, and so on and so forth. It quickly becomes a very tough bookkeeping problem.

But for people whose primary goal is to reduce taxation on capital, like Cruz, Norquist, and some Trump administration officials, the relevant alternative is not a higher rate on capital gains joined with indexing, but indexing with the rate unchanged. Generally, this branch of the Republican Party tries to minimize taxes on capital for fear that they discourage investment, and eliminating taxes on gains tied to inflation is one step in that direction. In 2016, Cruz ran for president on a platform that included totally junking the corporate income tax and cutting the tax rate on capital gains to 10 percent; it’s fair to interpret indexing as a step closer to that goal.

The problem with doing this through the executive branch, Kamin and Hemel argue, is twofold. For one thing, it could be illegal. In 1992, the Office of Legal Counsel for the first Bush administration concluded that when the Revenue Act of 1918 says that capital gains should be computed based on the initial “cost of such property,” that “cost” means the actual price paid — not the price adjusted for inflation. Its conclusion was that the president and the Treasury lack the ability to inflation-adjust without Congress. Kamin and Hemel argue that this conclusion has only been strengthened by subsequent court rulings.

The second problem is that the executive action doesn’t force expenses — like interest paid, or depreciation of investments — to be adjusted for inflation in turn. Kamin and Hemel explain that this could be gamed by businesses to create large-scale fake losses to offset their taxes:

Imagine that a taxpayer buys an asset for $100 that is fully financed by a loan. Assume that the real interest rate is zero, that the inflation rate is 10%, and that the nominal interest rate on the loan is 10% as well. One year later, assuming no change in the real value of the asset, the asset will be worth $110 on account of inflation. If basis is indexed for inflation, the taxpayer can sell the asset for $110 and recognize no taxable gain. Assuming that the interest is properly allocable to a trade or business, the taxpayer can claim an interest deduction of $10 with no offsetting gain, despite the fact that the taxpayer is in the same pre-tax position as previously

This has led even some libertarian-leaning economists skeptical of taxes on capital, like the Tax Foundation’s Kyle Pomerleau, to express concern with making this change unilaterally.

Beyond the gaming concerns and the legal problem, the change would also be plainly regressive. The Penn Wharton Budget Model, a respected tax and budget model at the University of Pennsylvania, estimates that indexing to inflation would cost $102 billion over 10 years, and 86.1 percent of the benefit would go to the richest 1 percent of Americans. Nearly two-thirds would go to the richest 0.1 percent. Capital ownership and capital gains are incredibly concentrated, meaning that cuts like this overwhelmingly redound to the rich.

If you think taxes on capital are just way too high, it’s a move that makes a lot of sense. But from every other perspective, it looks like an effort to redirect upward of $100 billion to the richest people in America.

After six months and $1.8 billion, Quibi wants a new owner. That will be a hard sell.
How a single neutrino just helped crack a 100-year-old cosmic ray mystery
Eric Trump used his latest Fox News appearance to push an absurd conspiracy theory about Covid-19
The Senate just acquitted former President Donald Trump of inciting an insurrection
Ayanna Pressley wins Massachusetts congressional primary in a suprise upset
No, the Regeneron drug Trump received is not a Covid-19 “cure”