Trump wants to see the death penalty come “into vogue” again. He’s wanted that for years. 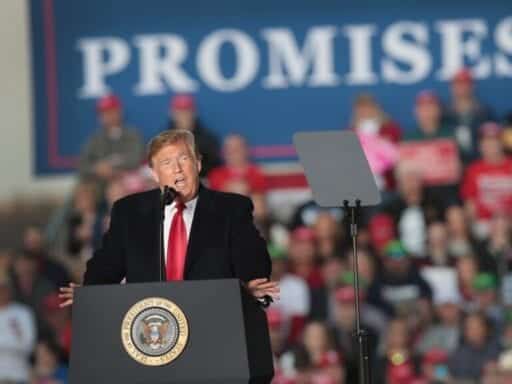 The president has a long-standing fascination with capital punishment.

President Donald Trump repeatedly called for “stiffer” death penalty laws Saturday after a gunman killed 11 people at a Pittsburgh synagogue — a familiar refrain invoked often by the president in the wake of mass atrocity.

“It’s a terrible, terrible thing what’s been going on with hate in our country,” Trump told reporters just hours after the attack on the Tree of Life synagogue ended, before saying it was time to “bring the death penalty into vogue.”

”When people do this they should get the death penalty,” he said. “And they shouldn’t have to wait years and years.”

It was far from the only time Trump talked about the death penalty yesterday, let alone the first time he’s championed it (or truncated due process for the accused) in the past.

The president’s support — bordering on fascination — for capital punishment goes back decades. In the 1980s, when Trump was a fixture of New York City’s real estate community and social scene, he took out an $85,000 full-page ad in the New York Times calling for the death penalty for five teenage boys who were suspects in the brutal rape of a female jogger in Central Park. The boys came to be known as the Central Park Five.

The ad, which was released before the boys even faced trial, read:

“I want to hate these muggers and murderers. They should be forced to suffer and, when they kill, they should be executed for their crimes. They must serve as examples so that others will think long and hard before committing a crime or an act of violence.”

After its release, the boys underwent intense interrogation without food, water or sleep, and were coerced into a confession. They spent 13 years in prison, only to later be absolved of the crime after a confession and DNA evidence surfaced in 2002.

But that didn’t dissuade Trump from calling for suspected criminals to pay “the ultimate price.” Before running for office, he called for “a very fast trial” and suggested execution by decapitation in a 2014 tweet following the decapitation of an Oklahoma woman by her co-worker. The year before, Trump said we should “not be kind” when demanding the quick trial and execution of Boston Marathon bomber Dzhokhar Anzorovich Tsarnaev.

The animal who beheaded the woman in Oklahoma should be given a very fast trial and then the death penalty. The same fate – beheading?

He’s carried that rallying cry with him to the White House, championing the death penalty multiple times on Saturday.

“I’ve felt that way for a long time,” he said. “Some people disagree with me, but I can’t imagine why.”

The death penalty may be the “ultimate price,” but there’s little evidence that it effectively deters crimes like the one Pittsburgh’s Jewish community suffered Saturday.

Researchers at the University of Colorado asked criminologists if they believed executions lowered the homicide rate. Eighty-eight percent of respondents said no. The three states with the highest murder rates in the United States in 2016 — Louisiana, Missouri and Alabama — all still allow capital punishment. (Just two states among the 10 with the lowest murder rates allowed the death penalty.)

Capital punishment is legal in Pennsylvania, but change is in the works following a death penalty moratorium issued by Gov. Tom Wolf in 2015. And earlier this year, a state task force released a report — six years in the making — that suggested a series of reforms regarding the treatment of mentally ill prisoners, public information, execution drugs and other facets of the capital punishment system in Pennsylvania.

“There is no way to put procedural safeguards in place that will guarantee with 100% certainty that the Commonwealth will not execute an innocent person,” the report reads.

The federal government still allows the death penalty — though executions are rare compared to those carried out by states.

“These alleged crimes are reprehensible and utterly repugnant to the values of this nation,” he said. “Accordingly, the Department of Justice will file hate crimes and other criminal charges against the defendant, including charges that could lead to the death penalty.”

— Alissa Wilkinson contributed to this report

Johnson & Johnson brings another effective Covid-19 vaccine to the arsenal — in a single dose
This man has donated at least 10% of his salary to charity for 11 years running
Newsmax just canceled MyPillow’s Mike Lindell live on air
The debate over a post office bailout, explained
The president’s job is to manage risk. But Trump is the risk.
The Dixie Chicks make their triumphant return with the kiss-off anthem “Gaslighter”