Trump wants to talk about anything but his coronavirus response. His attacks on the WHO show it. 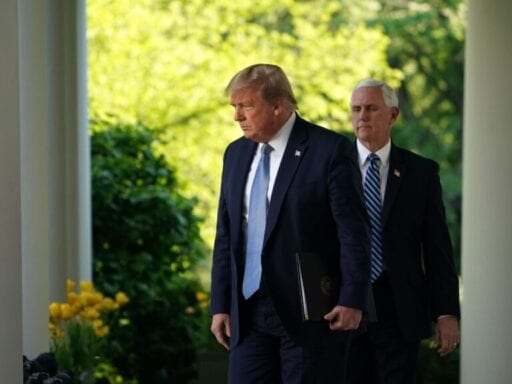 Minimization and misinformation: Trump accuses the WHO of the same things he did.

President Donald Trump’s latest spin is that while he always took the coronavirus seriously, his early efforts to respond to it were hampered by World Health Organization misinformation and a lack of warnings from American government officials. He’s rewriting history.

On Friday morning, Trump, echoing something he saw on Fox News, accused the WHO of making “several claims about the CoronaVirus that ere either inaccurate or misleading” in January and February.

In fact, Trump was warned many times about the virus early on — both by officials from his government and from the WHO. But rather than heed those warnings, he spent January and February downplaying the threat. He told Americans they had nothing to worry about because his government had it under control. He only treated the pandemic with the seriousness it requires when it became undeniable that the country was headed into the crisis we’re now dealing with.

With a tough reelection fight looming and the economy in tatters, those facts are inconvenient for Trump. He’s now trying to prematurely move on from the coronavirus and put his slow response down the memory hole.

America isn’t over the coronavirus hump yet. A record 4,591 people died from the virus in a 24-hour period ending Thursday evening. But Trump is cherry-picking statistics and ignoring the country’s lack of testing capacity to justify quickly reopening relatively unscathed parts of the country. And as he does that, he’s trying to change the topic from his administration’s performance to the WHO.

To be clear, it’s fair to criticize the WHO for a tweet it posted on January 14 citing “[p]reliminary investigations conducted by the Chinese authorities” that found “no clear evidence of human-to-human transmission.” That turned out to be devastatingly wrong. But Trump should also look in the mirror.

On January 24, for instance, he publicly praised China’s handling of the coronavirus, saying the US “greatly appreciates their efforts and transparency.” Most experts now believe the Chinese government was hiding the full extent of the outbreak.

China has been working very hard to contain the Coronavirus. The United States greatly appreciates their efforts and transparency. It will all work out well. In particular, on behalf of the American People, I want to thank President Xi!

And if Trump’s criticism is that the WHO spread dangerous misinformation, then he’s on thin ice there as well. The president has regularly pushed unproven and potentially lethal drugs as miracle cures. On Thursday, he posted tweets encouraging anti-stay-at-home-order protests in Minnesota and Michigan that could become vectors for spreading the virus.

Almost no masks and no regard for social distancing guidelines outside of the Governor’s Residence. @MPRnews pic.twitter.com/8aMLHSHYzA

While Trump is now trying to cast the WHO as a villain, the reality is that the US coronavirus response would’ve been much more effective had he actually followed some of the organization’s key recommendations about testing and social distancing. Instead, Trump sat idly by while the virus spread across the country in a mostly undetected manner in February and only embraced social distancing in mid-March, when public healths experts begin to sound the alarm about the possibility that American hospitals could be overwhelmed by Covid-19 patients like ones in China and Italy were.

This isn’t to say the WHO is blameless. The organization can also be fairly criticized for waiting until January 30 to declare coronavirus a public health emergency. But that declaration had no discernible impact on Trump, who on that very same day proclaimed that “we think we have [the coronavirus] very well under control.”

“We have very little problem in this country at this moment — five — and those people are all recuperating successfully,” Trump added. “But we’re working very closely with China and other countries, and we think it’s going to have a very good ending for us … that I can assure you.”

As we know now, the virus was anything but under control in the country at that time. But Trump didn’t just ignore the WHO — he also ignored warnings coming from his own government.

Trump was warned — but didn’t listen

During his press briefing on Thursday, Trump tried to portray himself as a victim. He described himself as “angry” because “people knew [the coronavirus outbreak] was happening and people didn’t want to talk about it.”

Those comments came days after Trump tried to push back on an in-depth New York Times report about his slow coronavirus response by tweeting that Secretary of Health and Human Services Alex Azar “told me nothing” about the coronavirus until after Trump restricted travel from China — a commendable move but one that came after the virus was already spreading in the US.

The @nytimes story is a Fake, just like the “paper” itself. I was criticized for moving too fast when I issued the China Ban, long before most others wanted to do so. @SecAzar told me nothing until later, and Peter Navarro memo was same as Ban (see his statements). Fake News!

Trump’s claim about Azar is at odds with what multiple unnamed senior administration officials told the Washington Post. From a report published on March 20:

Inside the White House, Trump’s advisers struggled to get him to take the virus seriously, according to multiple officials with knowledge of meetings among those advisers and with the president.

Although Trump now wants people to believe he wasn’t adequately warned, that same Post report says intelligence agencies “were issuing ominous, classified warnings in January and February,” with one unnamed US official telling the paper that “Trump may not have been expecting this, but a lot of other people in the government were — they just couldn’t get him to do anything about it. … The system was blinking red.”

It’s not just that one report, either. Trump also ignored White House memos prepared in January and February by his top trade adviser, Peter Navarro, including one addressed directly to him on February 23 warning in its very first sentence that “There is an increasing probability of a full-blown COVID-19 pandemic that could infect as many as 100 million Americans, with a loss of life of as many as 1-2 million souls.”

Not only did Trump not heed that warning, but he did the opposite by telling Americans there was nothing to worry about. For instance, on February 26 — just three days after Navarro tried to sound the alarm — Trump held a news conference in which he suggested the coronavirus would soon go away on its own in the United States.

On February 27, as the US confirmed case count stood at 15, Trump went even further, claiming of the coronavirus that “one day — it’s like a miracle — it will disappear.”

He has now moved the goalposts from saying the virus will go away to insisting that if as many as 100,000 American deaths would be evidence he did a good job. He’s criticizing the WHO not because he has good-faith concerns about the organization, but because it’s a useful distraction that is being amplified by loyal media outlets like Fox News.

The absurd whiteness of America’s court system, in 2 charts
Minneapolis police officer Derek Chauvin charged with murder in the death of George Floyd
“Without it, we are flying in the dark”: Why the US needs better coronavirus testing, fast
Biden charts a path to a post-pandemic normal, with July 4 as his target
A historian surveys the wreckage of the Trump-Putin summit
House Republicans release their impeachment inquiry witness wish list