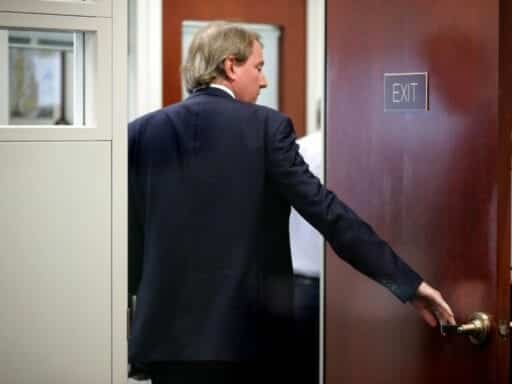 White House counsel Don McGahn was rumored to be on his way out for months, but President Donald Trump finally made it official Wednesday on Twitter.

Trump announced that McGahn would be departing the White House this fall, following the confirmation of Supreme Court nominee Judge Brett Kavanaugh.

“I have worked with Don for a long time and truly appreciate his service!” the president wrote.

White House Counsel Don McGahn will be leaving his position in the fall, shortly after the confirmation (hopefully) of Judge Brett Kavanaugh to the United States Supreme Court. I have worked with Don for a long time and truly appreciate his service!

Trump did not specify who would replace McGahn, though he may have a tough time filling the position. McGahn’s successor will have to take over in the midst of special counsel Robert Mueller’s ongoing, high-profile investigation into possible collusion between the Trump campaign and Russia during the 2016 presidential election, which seems to be making Trump increasingly agitated.

McGahn had the thankless job of deflecting Trump’s worst whims, whether it was halfheartedly making the case to Attorney General Jeff Sessions not to recuse himself from the Russia investigation in March 2017 or threatening to resign rather than fire Mueller in June 2017.

Indeed, McGahn is a central witness in Mueller’s investigation into whether Trump committed obstruction of justice by trying to derail the Russia investigation.

As the New York Times reported earlier this month, McGahn has provided three separate interviews, totaling 30 hours’ worth of testimony, to Mueller’s team about topics including Trump’s decision to fire former FBI Director James Comey, his public and private bashing of Sessions, and his attempts to fire Mueller.

McGahn cooperated with the special counsel’s prosecutors willingly, reportedly fearing that Trump was setting him up to take the fall for obstruction of justice, much like John Dean, Richard M. Nixon’s White House counsel, who pleaded guilty to obstruction charges but eventually cooperated in the Watergate investigation. In August, Trump said McGahn is not a “John Dean type ‘RAT,’” and that he allowed him to testify because he has “nothing to hide.”

Beyond his dealings with the Russia probe, McGahn dutifully carried out the GOP’s agenda to get conservative justices confirmed to the bench, and he’ll depart after likely succeeding in getting Trump’s second Supreme Court pick seat. At least some on Capitol Hill seemed upset by the news of McGahn’s departure, including Iowa Sen. Chuck Grassley:

@realDonaldTrump I hope it’s not true McGahn is leaving WhiteHouse Counsel. U can’t let that happen

But Grassley shouldn’t be that surprised. McGahn’s relationship with Trump had reportedly grown increasingly tense; the White House counsel’s cooperation with Mueller likely did little to endear him to his boss.

Flood undoubtedly has the experience for the White House counsel job and what could be a very busy few months with the Mueller investigation. If the Democrats retake the House of Representatives in the midterm elections, he should also be ready for a likely onslaught of congressional subpoenas.

Campfires, explained
Who will win all of Tuesday’s primaries, according to the polls
Trump keeps promoting an unproven coronavirus treatment — despite his experts’ advice
The systemic racism black Americans face, explained in 9 charts
Mamma Mia! Here We Go Again is a kooky, poppy romp
Biden’s big Putin bet