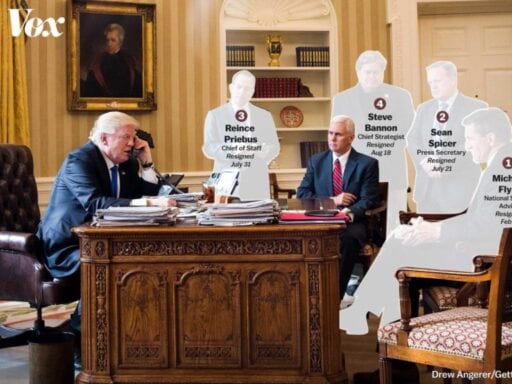 From Scott Pruitt to James Comey to Hope Hicks.

If you feel like you can’t keep up with the Trump White House’s firings, resignations, and staffing changes, there’s a reason: The Trump administration has had more staff turnover than any other in decades. It saw an unprecedented 34 percent turnover rate in President Trump’s first year in office. That’s double Ronald Reagan’s rate during the same period, and more than three times Barack Obama’s.

High staff turnover at the White House isn’t necessarily unusual, but this revolving door is. As Vox’s Ezra Klein reports, working in the Trump administration is “a frustrating, dispiriting, and often surreal experience, and it exposes staffers to both legal and reputational risks.” That’s created a serious management crisis.

The immense physical labor of narrating an audiobook
The Democratic National Convention just announced its speaker lineup
It Chapter Two is fun and scary, but lacks what made Chapter One great
Welcome to the Star Wars zoo
US allies express dismay over US handling of global medical supply chain
In Japan, Trump pushes a hard line on trade — and a soft line on North Korea