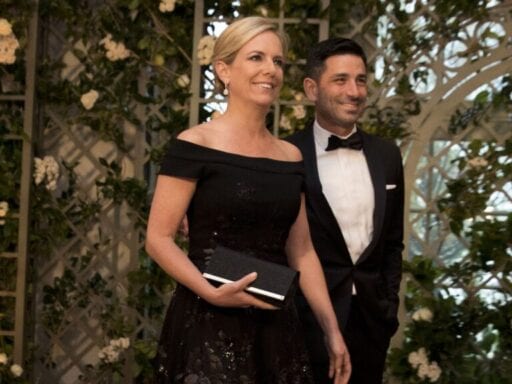 He served as former DHS Secretary Kirstjen Nielsen’s chief of staff while she carried out the separations of immigrant families.

President Donald Trump will reportedly appoint Chad Wolf, a senior career official in the Department of Homeland Security, as acting secretary of the department. He will replace Kevin McAleenan, who announced his resignation earlier this month.

Wolf is currently overseeing DHS’s Office of Strategy, Policy, and Plans, the agency’s policy shop, in an acting capacity. Trump’s decision to name him as the next acting DHS head was first reported by Politico.

He is a close ally of former DHS Secretary Kirstjen Nielsen; he previously served as her chief of staff at DHS, and they attended Trump’s first state dinner in April 2018 together. Wolf was nominated by Nielsen to his current role, and he has yet to be confirmed by the Senate in that role.

At his confirmation hearing in June, he came under fire from Democratic senators who questioned his role in the separation of immigrant families while he served as Nielsen’s chief of staff. Sen. Jacky Rosen (D-NV) announced that she would block a vote on his nomination “until the inhumane and substandard conditions for children at DHS processing and detention facilities improve significantly.”

Wolf also served as a senior official in the Transportation Security Administration from 2002 to 2005 and again for a few months in 2017 as head of the agency’s policy shop before he was named Nielsen’s chief of staff. During a two-year stint in the private sector, he lobbied for increasing the number of H-1B skilled worker visas available annually.

Others who were reportedly in the running for the job included acting US Customs and Border Protection Commissioner Mark Morgan and acting Director of US Citizenship and Immigration Services Ken Cuccinelli. But Morgan and Cuccinelli would likely have faced challenges to their nominations on the basis of the Federal Vacancies Reform Act, which establishes requirements for an official to be able to serve in an acting capacity.

The law allows the president to fill a vacancy temporarily with anyone who is the “first assistant” to the open position, holds a Senate-confirmed position in the administration, or has served in the same agency as the open position for a minimum of 90 days prior to the opening of the vacancy, regardless of whether they have been confirmed by the Senate.

It’s not likely that either Morgan or Cuccinelli are eligible under those requirements, and Cuccinelli is already facing a lawsuit challenging the legitimacy of his appointment as USCIS director.

Wolf, on the other hand, would qualify under the act because he held a position in DHS for more than 90 days prior to when Nielsen, the last Senate-confirmed DHS secretary, left the post in April after Trump asked her to resign.

The fact that Trump chose Wolf may signal that Nielsen, who has since returned to the agency in an advisory role, may nevertheless continue to wield influence.

It’s not clear whether Wolf will publicly defend Trump’s immigration policies as fiercely as Morgan or Cuccinelli already have. McAleenan tried to distinguish himself from immigration hardliners in the Trump administration while leading the agency charged with carrying out its policies.

McAleenan said in a recent interview with the Washington Post that, while he controlled DHS’s operations on the ground, he was not directing how policies were communicated publicly.

He expressed regret at his role in co-writing a memo that led to the Trump administration’s “zero tolerance” policy on illegal border crossings, which led to the separation of almost 4,000 immigrant families.

But at the same time, McAleenan gave Trump what he wanted: The number of migrants apprehended at the southern border fell to about 52,000 in September from almost 133,000 at their peak in May. Trump has considered it a crisis worthy of declaring a national emergency, as he did in February, referring to it repeatedly in public remarks and campaign ads as an “invasion” of migrants.

He struck international deals that would force migrants seeking asylum to return to Central American countries struggling with high levels of crime and violence. He implemented the administration’s Remain in Mexico policy — under which over 50,000 migrants have been sent back to Mexico while they await decisions on their asylum applications — across the entire southern border.

He rolled out the so-called public charge rule that was blocked by courts but would make it more difficult for low-income immigrants to legally enter and settle in the US. And he ended the administration’s practice of releasing immigrant families from detention into the US, which Trump has called “catch and release,” sending them instead to Mexico.

There is no fall TV season anymore
It’s okay to admit that Trump deserves some credit for the economy
Why Beethoven’s 5th Symphony matters in 2020
The pandemic changed my mind about Peloton
Vox Sentences: Women’s soccer on offense
Robert Mueller wants to question the “Manhattan Madam”