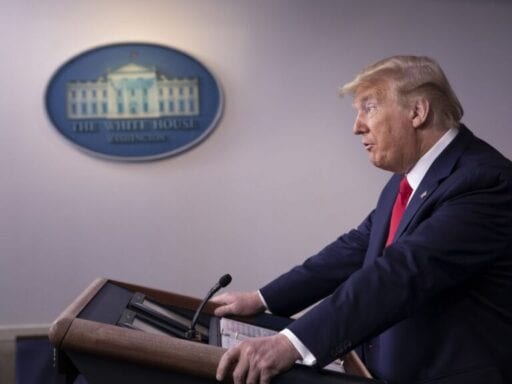 President Donald Trump won’t commit to exempting his business from emergency coronavirus stimulus legislation that Congress is negotiating — an episode that would represent one of the most blatant instances of presidential self-dealing in American history.

“Let’s just see what happens,” Trump said during a news conference on Sunday, in response to a question about whether he’d commit to no stimulus money going to the Trump Organization.

REPORTER: Will you commit that no money from the emergency stimulus bill will go to your own properties?

(That’s definitely not a yes!) pic.twitter.com/PoMw96bFAi

Those comments marked the second straight day that Trump was evasive in response to questions about his business. Asked during a news conference on Saturday if he expects the Trump Organization to to seek government assistance, Trump said, “I don’t know.”

REPORTER: Do you expect your business to seek government assistance?

As experts say the coronavirus economic shutdown could result in unemployment hitting 30 percent and gross domestic product dropping by an unprecedented 50 percent in the second quarter of this year, Congress is negotiating a stimulus package that could provide hundreds of billions of dollars to workers and the businesses that employ them — including the one owned by the president.

Parts of Trump’s business — like the rest of the hotel, restaurant, and hospitality industry — have been especially hard hit by the coronavirus pandemic and social distancing measures it has necessitated. The Washington Post reported last week that the Trump Organization has already laid off more than 200 workers across Las Vegas, New York, and DC as his properties have either been forced to shut down or, in the case of the Trump International Hotel located just blocks from the White House, been faced with occupancy rates as low as 5 percent.

But the fact that Trump finds himself in a position where he can sign legislation directly enriching himself illustrates why the precedent had been for presidents to divest themselves from their business interests when they took office. Trump refused to do that, merely ceding day-to-day operations of the Trump Organizations to his two adult sons, whom he speaks with frequently and who serve as key political surrogates for him.

REPORTER: Did you or anyone in your administration talk to anyone at the Trump Organization about the potential effects of the coronavirus?

TRUMP: “No. I didn’t speak to anybody. I speak to my sons.” (Trump’s sons are running his business) pic.twitter.com/hemAUUYjDA

The question of whether the president’s business stands to gain from a stimulus bill he signs into law is more than an academic one. The bill championed by Senate Majority Leader Mitch McConnell (but rejected in a party-line vote on Sunday by Senate Democrats) included a $500 billion “Exchange Stabilization Fund” that would’ve given Treasury Secretary Steven Mnuchin broad authority to decide which businesses benefited, and Congress limited authority to oversee it or even know where the money was going.

Trump has financially benefited from legislation he’s signed into law before — he reportedly saved somewhere between $11 million and $22 million annually in tax payments thanks to Republicans’ 2017 tax cut bill. But rerouting money directly from taxpayers to his pockets would take the self-dealing up a notch, and his comments on Saturday and Sunday seem to indicate he’s feeling less shame about that than ever.

“What’s interesting here is that Trump doesn’t even pretend not to own and profit from his businesses anymore,” Robert Maguire, research director for Citizens for Responsibility and Ethics in Washington (CREW), said in response to Trump’s comments on Saturday. “Remember the early days? The stack of documents. The claims of separation. … All pretense is gone now, and now his businesses might get bailed out with taxpayer money.”