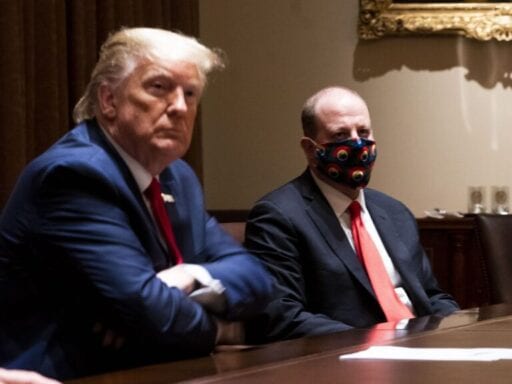 Share
Loading...
Colorado Gov. Jared Polis (C) wears a face mask as President Donald Trump makes remarks during a meeting in the Cabinet Room of the White House on May 13, 2020. | Doug Mills-Pool/Getty Images

Now America’s coronavirus rate is on the rise, racing into uncharted territory even as Europe, Canada, and Japan hold new case rates to about 100 per million residents, or less. This chart, compiled by the New York Times using data from Johns Hopkins University, is a stark reminder that the outbreak we’re experiencing isn’t an inevitability of the disease, but a staggering failure of policy and public health compliance:

Behind those lines lie the obvious mistakes and elite signals: States are reopening despite meeting few of the guidelines to end lockdowns. The president is holding indoor rallies, his campaign aides removing stickers encouraging social distancing at the venue. Masks have become part of America’s culture war. America is headed for a disaster driven not so much by the disease as the politics that surround it.

“America is the global exception right now,” says Gregorio Millet, director of public policy at amFAR. “Just look at the EU or New Zealand or countries across Asia. These places have vastly different cultures, different geographies, different institutions, different everything — but the one thing they have in common is that everyone is following public health measures. And they’ve all kept this virus at bay. Our leaders decided to politicize a scientific issue and as a result, our curve looks different than the rest of the world’s.”

Which raises the question: Is political polarization literally killing us?

The two types of polarization

Structural polarization stems from the core incentives of American politics. Elections are zero-sum affairs, and voters reward the majority party for successful, popular governance. The minority party’s default tendency to oppose the majority party’s signature initiatives is an example of structural polarization. It can be resisted or overcome, but it flows from the basic structure of our political system.

Discretionary polarization reflects the idiosyncratic decisions leaders make. Take face masks, for example. In an alternative universe, where President Mitt Romney is in the final year of his second term, would there be a politicized culture war over face masks? I doubt it. President Romney would be wearing a mask and urging others to do the same, just as Sen. Romney, and many of his colleagues, are doing now.

“We must have no stigma, none, about wearing masks when we leave our homes and come near other people,” Senate Majority Leader Mitch McConnell (R-KY) said on the Senate floor. “Wearing simple face coverings is not about protecting ourselves, it is about protecting everyone we encounter. There is nothing cowardly about common courtesy.”

There is nothing intrinsic to the structure of American politics, or the composition of the Republican Party, that made Trump turn against masks. If anything, Trump’s opposition is an act against self-interest. A successful Covid-19 response would improve Trump’s reelection prospect. Widespread mask-wearing is key to a successful Covid-19 response. That Trump refused to wear a mask while touring a factory that makes masks reflects Trumpism, not polarization.

In this way, Covid-19 is the exception that should remind us of the rule. Public health policies — and particularly public health emergencies — have often been an area of bipartisan unity, even in polarized times.

“There’s been bipartisan support for PEPFAR, for combating malaria globally, for tons of public health initiatives, says Jennifer Kates, director of global health & HIV policy at the Kaiser Family Foundation. “And those are for epidemics that aren’t happening primarily within our borders. The fact that this is happening right here and we still have this division is a tragedy and an aberration.”

Americans trusted Trump, and he misled them

Sara Wallace Goodman, a political scientist at the University of California at Irvine, has been part of a team repeatedly surveying the same group of Americans to see how their behaviors and attitudes have changed over the course of the virus. Even controlling for factors like the prevalence of the disease in the place respondents live, Wallace Goodman and her colleagues find a significant and growing partisan gap in terms of fear of the disease, perceived safety of different behaviors, and preferred policy solutions.

The key to understanding this, Wallace Goodman says, is that “when people are operating in areas of high misinformation and lack of information, they take cues. We can only be rational if our leaders are rational. If you see the president not wearing a mask in meetings, you’re going to model what he does.”

This is, from a certain perspective, reasonable: The president has more information than you do, and if you’ve decided you trust him, then it makes sense to follow his lead. Few of us — liberal mask-wearers included — have personally conducted studies on the behavior of the novel coronavirus. We, too, are taking elite cues, listening to epidemiologists and science journalists and Dr. Anthony Fauci.

The central question in a political system is who to trust. Once that decision has been made, everything else follows. The tragedy of American politics in 2020 is that many Americans sincerely trusted an untrustworthy man. And the cost of that mistake will be devastating, for Trump’s supporters and detractors alike.

“The virus doesn’t care if you’re a Democrat or Republican or live in the US or South Korea or France,” says Kates. “When things like politics define what people are willing to do and what laws are put in place, that can have deadly consequences.”

There were always going to be arguments over how best to respond to Covid-19, but it was Trump’s choice to politicize basic public health measures like face masks, to sideline scientists and hold indoor rallies, to waste the time bought by lockdowns in petty political fights and manic tweeting sprees. It wasn’t the abstract forces of polarization that led to the divides over Covid-19, but the specific decisions of the Trump administration.

There are signs that the harm of Trump’s failures are breaking through the firewall of polarization. Disapproval of Trump has reached new highs; former Vice President Joe Biden is leading by almost 10 points in polling averages, and Republican satisfaction with the state of the country is in a nosedive. But in this case, the political consequences will lag the human consequences, and no matter what happens in the election, the country has at least seven months left of Trump’s leadership.

“There was nothing inevitable about the polarized response to Covid-19,” says Wallace Goodman. “This outcome is a policy choice. The unnecessary lives lost. The long-term effects we don’t even know about yet on our vital organs. It’s all a policy choice.”

Why it’s still unlikely we’ll have a Covid-19 vaccine before Election Day
Sorry for Your Loss is a must-see TV show. You can only watch it on Facebook.
Deciem’s Brandon Truaxe: the world’s most controversial beauty CEO, explained
The bizarre abortion order just handed down by the Supreme Court, briefly explained
Greta Thunberg is right: It’s time to haul ass on climate change
The US South could save money by cleaning up its power grid