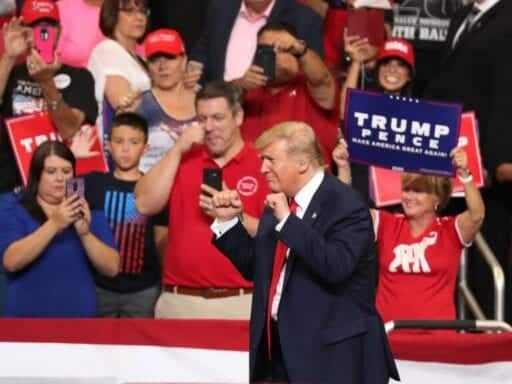 The speech President Donald Trump delivered to launch his 2020 reelection campaign sure seemed a lot like the ones he made in 2016.

Trump goaded his audience into booing the media almost immediately and spent a great deal of time attacking Hillary Clinton, prompting numerous “lock her up!” chants — and even went as far as to suggest that Attorney General William Barr may still prosecute her for her emails.

“If you want to know how the system is rigged, just compared how they came after us for three years with everything they had compared to the free pass they gave to Hillary and her aides after they set an illegal server, destroyed evidence, deleted an acid washed 33,000 emails, exposed classified information, and turned the State Department into a pay-for-play cash machine,” Trump said at one point. “33,000 emails deleted!”

Trump went on to attack Clinton for purportedly defying subpoenas — the same thing his administration is currently doing.

It’s 2019 and Trump is still running against Hillary Clinton pic.twitter.com/AhPnbnl2XH

Even though early polls indicate Trump is trailing each and every one of the top contenders for the 2020 Democratic nomination for president, observers could’ve closed their eyes on Tuesday and believed that Trump is still running against Hillary Clinton.

While Trump does have a relatively strong economy to run on, during his speech on Tuesday he touted outdated stats about African American and Hispanic unemployment rates and made absurd promises, such as promising to cure cancer, AIDS, and “lay the foundation” for a Mars landing — all within the span of 30 seconds.

In this single clip, Trump promises to cure cancer, AIDS, and “lay the foundation” for a Mars landing — all in his second term pic.twitter.com/aLZqbx2p3N

Trump took credit for Veterans’ Choice legislation signed into law by Obama. And even though he refused to divest from his business interests and regularly deploys government resources so he can spend weekends at clubs he still owns and profits from, he claimed that his movement was about reclaiming power “from a permanent political class that enriched itself at your expense.”

Trump lambasted Democrats for supporting “socialism,” but did so incoherently. At one point he proclaimed, “Republicans do not believe in socialism. We believe in freedom,” but in the next breath vowed that his party will staunchly defend Social Security and Medicare, social safety net programs that Democrats passed into law decades ago and that Republicans have tried to winnow for years.

Trump even closed his speech by vowing to “make America great again” — just as he did in 2015 and 2016. It was almost as though he never won an election at all.

Immigration detention crisis: On social media, people ask #WhereAreTheGirls
Bernie Sanders has declared victory in Iowa, without the final results
A 13-year-old’s death highlights Puerto Rico’s post-Maria health care crisis
The past 72 hours in Sarah Sanders’s dinner and the civility debate, explained
Will Ferrell and Julia Louis-Dreyfus were finishing each other’s sentences by the end of Downhill
2020 Democratic candidates aren’t happy about new debate rules that seem to benefit Bloomberg