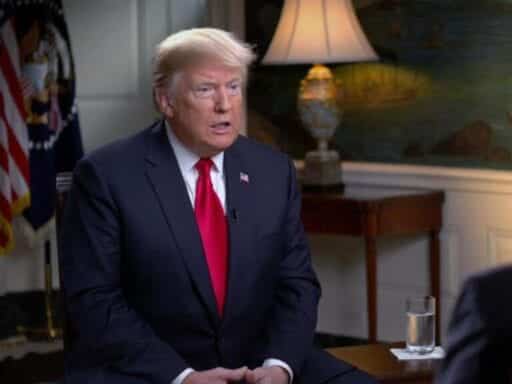 Little new ground was broken in an interview that was both bizarre and bizarrely familiar.

Donald Trump trusts Kim Jong Un but not American climate scientists. He knows more about NATO than Secretary of Defense Jim Mattis. He thinks the European Union was created to take advantage of America on trade. And he isn’t sure whether or not Vladimir Putin is involved in assassinations.

In short, his sit-down interview with 60 Minutes’ Lesley Stahl revealed the president of the United States to be grossly dishonest, woefully ill-informed, and congenitally incapable of admitting error or demonstrating any kind of moral or intellectual growth.

He is, in other words, totally unfit for high office and fairly obviously so. Even more amazingly, despite Stahl covering an incredibly wide range of issues she broke essentially no new ground. Every terrible, disqualifying thing he said was something he’s said before.

Donald Trump says a lot of things that aren’t true

I’ve written up a lot of Trump interviews, and one untrue thing he almost invariably says is that the US trade deficit with China costs us $500 billion a year. This is neither how trade deficits work, nor the correct figure which should be more like $350 billion.

For Sunday night’s performance, Trump was seemingly prepped that his number is wrong, but instead of using the accurate one he simply modified his usually statement, telling Stahl “I told president XI, we cannot continue to have China take $500 billion a year out of the United States in the form of trade and other things.”

What other things? Who knows?

He also told Stahl that “the day before I came in, we were going to war with North Korea” that “China meddled, too” in the 2016 election, that climate change “could very well go back,” and that the United States is “paying almost the entire cost of NATO to protect Europe.”

Needless to say, none of this is anywhere close to the neighborhood of being true. Trump does occasionally dabble in the more conventional politicians’ hobby of offering misleading answers like when he insists that Central American asylum seekers are coming to the country illegally without mentioning that his administration has refused to let them apply at the legal ports of entry.

But what’s most striking about Trump is the scope and breadth of the sheer nonsense he dispenses, and his utter unwillingness to grow.

In her most inspired moment of the interview, Stahl caught Trump off-balance by tossing him a softball and asking what he’d learned about politics since becoming the first president to lack prior government experience. Trump made up a story about counter-parties welching on deals, and then when called on it retreated to total vacuousness.

Trump: They’re babies, the political people. This is the most deceptive, vicious world. It is vicious, it’s full of lies, deceit, and deception. You make a deal with somebody and it’s like making a deal with– that table.

Stahl: Give me an example.

Trump: Well, I don’t want to give you an example. I’m not looking to — in the meantime, nobody’s been able to do what I’ve been able to do. Remember that. When you look at taxes, you look at regulations, you look at making deals with other countries. Nobody’s been able to do anything like this. Actually, most people didn’t even try because they knew they didn’t have the ability to do it. But it’s a very deceptive world. The other thing I’ve really learned is, I never knew how dishonest the media was. And I really mean it. I’m not saying that as a sound bite.

Obviously — and I mean really obviously, you don’t need to know much about politics to know this — plenty of other presidents have made changes to tax and regulatory policy and made deals with foreign countries.

These aren’t extraordinary achievements, they’re just the regular banal aspects of doing the job. Except, of course, Trump can’t even fully master doing the minimum.

Stahl asked Trump squarely why he never says anything harsh about Vladimir Putin, setting Trump up for what should have been one of the easiest layups in the history of American politics. Except he once again refused to take it.

Trump: I think I’m very tough with him personally. I had a meeting with him. The two of us. It was a very tough meeting and it was a very good meeting.

Stahl: Do you agree that Vladimir Putin is involved in assassinations? In poisonings?

Trump: Probably he is, yeah. Probably. I mean, I don’t–

Trump: Probably, but I rely on them, it’s not in our country.

On its face this appears to be yet more damning, albeit circumstantial, evidence that Trump and the Russians are up to no good — complete with the oddly ominous “I rely on them” reference. Rely on them for what?

But in Trump’s defense — if you can call it a defense — he’s actually like this with a broad range of figures. He maintained that “nobody knows yet” who killed Jamal Khashoggi inside the Saudi consulate even though there’s pretty clearly only one government that can be reasonably suspected of killing a Saudi dissident inside a Saudi government building. But Trump has his doubts because “they deny it.”

Asked if he trusts North Korean dictator Kim Jong Un, Trump is also friendly: “I do trust him, yeah, I trust him.”

But asked if he believes the global scientific community about climate change, he developed doubts: “Look, scientists also have a political agenda.”

Trump is unfit and we are stuck with him

Perhaps the most telling moments in the whole interview were two separated remarks about Secretary of Defense James Mattis. At one point Trump, when asked about reports that Mattis had tried to explain the value of NATO to him, snapped “I think I know more about it than he does.”

Later, Trump explained that Mattis is “sort of a Democrat, if you want to know the truth.”

Mattis is, of course, not a Democrat. He is a career military officer and defense hawk who was fired by Barack Obama’s administration for his unwillingness to get on board with their diplomatic opening to Iran. That, in turn, is how he ended up working for Trump.

But Trump refuses to listen to anyone about anything, even subject-matter experts who clearly know more than he does. Instead he concocts a bizarre mirror universe in which Mattis holding a very normal Republican Party view about NATO becomes evidence that he’s a crypto-Democrat. Which in turn is a reminder that while Republicans in congress support Trump because he largely advocates an orthodox Republican agenda, it’s far from a perfectly orthodox one.

Indeed, if Trump were drummed out of office in favor of someone less ignorant, mean-spirited, dishonest, corrupt, and arrogant he would be replaced by someone who hewed closer to congressional Republicans’ policy views not further. But Trump is right that at this point he is the Republican Party and the Republican Party is him. If Republicans lose the House in a few weeks, there may finally be some kind of check on his conduct and oversight of the government but he’ll still be president and still have no idea what he’s doing. All we can do is hope America’s luck holds up.

Trump’s middle-class tax cut is a fairy tale that distracts from the real midterm stakes
Early voting in Georgia’s Senate runoffs is massive — but what does that mean?
Working for Mark Zuckerberg’s philanthropy isn’t always easy since it means working for Mark Zuckerb...
How tech companies are trying to make augmented and virtual reality a thing, again
Religious leaders are becoming content creators to keep their followers engaged
A power struggle over Tripoli threatens to push Libya further into chaos