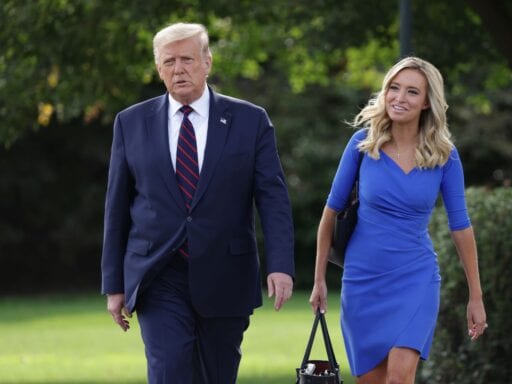 He faced tough questions from voters — and had few answers.

President Donald Trump rarely sits down with reporters who don’t work for Fox News (his disastrous recent interview with Jonathan Swan being a notable exception), and even less frequently gives voters a chance to directly ask him questions. His Tuesday night town hall event on ABC illustrated why.

The 90-minute event, which took place in Philadelphia and consisted of him answering questions from a spectrum of voters and ABC host George Stephanopoulos, did not go well for Trump — so much so that Fox News’s immediate spin was that it was an “ambush.” Their evidence? That people had the gall to ask him about his own statements and policy positions.

Perhaps no moment illustrated the incoherence of Trump’s reelection messaging better than when he tried to blame Joe Biden for not implementing a national mask mandate, seemingly forgetting that he’s the president.

“They said at the Democrat convention they’re gonna do a national [mask] mandate. They never did it, because they’ve checked out and they didn’t do it,” he said, before going on to claim without evidence that “a lot of people think that masks are not good.” (In fact, public health experts broadly agree that wearing a mask around people can help prevent the spread of the coronavirus.)

“They said at the Democrat Convention they’re gonna do a national [mask] mandate. They never did it.” — someone might want to inform Trump who the president is

He then tries to both-sides mask wearing, saying “a lot of people think that masks are not good.” pic.twitter.com/FACVjMr0di

Though Stephanopoulos at times let Trump go on extended, untruthful rants, he set the tone early by challenging a number of false claims Trump made about the “tremendous job” his government has purportedly done handling the coronavirus — spin belied by the reality that the US has endured by far the most confirmed cases and deaths in the world.

“You said we’re doing better in mortality than other countries, but here’s this chart right here. It shows the United States is right here, this is number of deaths per 1 million residents — here’s Western Europe [above the United States], Canada way down there. We’re not at the top of the list,” Stephanopoulos said.

Trump responded by citing misleading statistics comparing the US’s excess mortality rate to the rest of the world, prompting Stephanopoulos to interject and cut to the heart of the matter.

“Well, we have 20 percent of the cases because of the fact we do much more testing,” Trump said, as if testing is the cause of cases or deaths instead of the underlying disease.

STEPHANOPOULOS: You said we’re doing better in mortality than other countries. We’re not. Here’s a chart

TRUMP: The excess mortality rate is among the best [this isn’t true]

T: Well, we do much more testing pic.twitter.com/rSHw1FiuKa

In response to a question from a voter, Trump denied he ever publicly downplayed the coronavirus — “I actually, in many ways, I up-played it” — even though he’s on tape admitting to downplaying the threat.

To cap off the coronavirus portion of the town hall, Trump defended his unscientific claims about how Covid-19 will “disappear” on its own, without robust government intervention, even after Stephanopoulos pointed out the high cost of that approach.

“It would go away without the vaccine, George,” Trump said.

“It would go away without the vaccine?” Stephanopoulos followed up.

“And many deaths,” Stephanopoulos said, alluding to the fact that pursuing “herd immunity” without vaccinations could result in as many as 3 million Americans dying.

“And you’ll develop, like, a herd mentality,” Trump said, before Stephanopoulos went to a commercial break.

TRUMP: It is going away

STEPHANOPOULOS: Without a vaccine?

TRUMP: Sure. Over a period of time

S: And many deaths

It’s hard to imagine that any of this would convince undecided voters that Trump is doing a good job responding to a pandemic that continues to disrupt life in the US and killed more than 1,000 people on Tuesday. But things didn’t go much better when the town hall turned to other topics.

Trump won’t even acknowledge that systemic racism is a thing

Another vulnerability Trump faces headed into the home stretch of his reelection campaign is his record on race relations. While some voters might like his coded “law and order” messaging, Trump’s long history of racism came to a head this summer when he responded to a string of incidents of police violence against Black people by trying to demonize protesters and denying that systemic racism is even a problem in American society.

On Tuesday, Stephanopoulos confronted Trump with statistics pointing toward the reality of systemic racism — “Black Americans [are] more than three times [as] likely to be killed by police,” he noted, for example — and asked him what he plans to do (if anything) to rectify the situation.

But instead of engaging with the substance of the question, Trump immediately steered the discussion toward polling.

Presenting with a statistics indicating that Black people are far more likely than Whites to be victims of police violence, Trump quickly changes the topic to polling indicating Black people support having more cops in their communities (He refuses to acknowledge systemic racism) pic.twitter.com/JubzzbUjhf

A voter then asked Trump to explain when America has ever been great for Black people. Again, Trump tried to twist the question into an opportunity to talk about polling.

“Well, I can say this, we have tremendous African American support,” Trump claimed, although polls friendly to him peg his approval with Black voters at under 25 percent. (A number that, in fairness, is much higher than the 8 percent Black support he had in 2016.)

Asked by a Black man to explain when America has every been great for Black people, Trump immediately changes the topic to his polling pic.twitter.com/lxPmy69qn3

But the voter pushed back, noting that Trump “has yet to address and acknowledge that there has been a race problem in America.”

“I hope there’s not a race problem,” Trump replied.

“I hope there’s not a race problem” — Trump on systemic racism pic.twitter.com/B5tezKIkgd

These comments aren’t surprising — Trump has consistently denied that America has a systemic racism problem. But with support for the Black Lives Matter movement growing over the summer in the wake of the Breonna Taylor and George Floyd killings, among others, his position is more out of touch than ever.

Of course, when reality doesn’t suffice, Trump has no shame about constructing an alternate one. At one point on Tuesday he insisted, dubiously, that before Covid-19 hit, he was close to solving racial strife in the country.

“I was starting to get calls from Democrats, that, ‘Hey, it’s starting to work, let’s get together,’” Trump said, when in reality he had just been through an impeachment trial.

Trump has no shame about just making stuff up

Trump’s health care platform is bullshitting about how he’s already implemented a new health care plan when he’s done nothing but actively work to take health care away from tens of millions of people pic.twitter.com/tX37qldesC

Along similar lines, Trump told a voter who asked him about immigration that he’ll unveil new legislation “in a very short time” — a talking point Trump he often uses to buy time when he doesn’t really have a plan.

On the topic of law and order — one that Trump is trying to make a centerpiece of his campaign — Stephanopoulos grilled him on a disconnect between what he said back in 2016 and what he’s saying now.

“You promised four years ago at the Republican Convention, ‘I’m gonna restore law and order in this country,’” he pointed out.

Trump’s response was that he has — if you disregard all the large cities that are run by Democrats (so, most of them).

After Trump claims lawlessness is “a Democrat problem,” Stephanopoulos reminds him that he promised to restore law and order during his 2016 campaign

“And I have. Except in Democrat-run cities,” Trump replies pic.twitter.com/u3244ulO7j

Trump went on to compare the unrest that took place in American cities over the summer with the fall of Berlin in 1945, seemingly unaware of how that analogy reflects on his stewardship of the country.

This is your brain on Fox News

In a sign of how Trump thought the town hall went, while it aired on Tuesday night, he tweeted out Fox News clips. And while his performance was widely panned, on Wednesday morning Trump characteristically tried to turn reality on its head by thanking people for the “great reviews.”

Thank you for the great reviews of the @ABC News show last night!

Trump’s Tuesday was really a tale of two interviews. He began his day with a lengthy sit-down with Fox & Friends in which his lies and exaggerations went unchallenged, and ended with the ABC event in which his effort to construct an alternate reality wasn’t as successful.

To the extent that the latter served as a preview of what we can expect from the upcoming presidential debates, it doesn’t bode well for the incumbent.

The case for a massive federal aid package for states and cities
My family founded Barneys. Now the great department store is closing.
Melania Trump’s parents became citizens through a system Donald Trump hates
What America can learn from the fall of the Roman republic
Housing immigrant kids is big business for a non-profit paying its CEO nearly $1.5 million
Trump: “We’ll be cutting” entitlement programs. White House: He didn’t really mean that.