Trump’s about to announce his Supreme Court pick. Here’s when and where to watch. 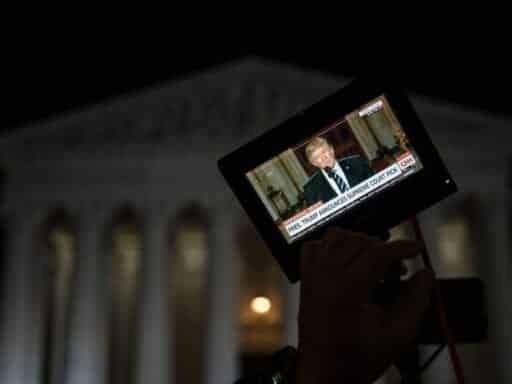 Trump will announce his nominee to replace Anthony Kennedy on Monday evening.

President Donald Trump is set to announce his nominee to fill the vacant seat of retiring Supreme Court Justice Anthony Kennedy at 9 pm Eastern time on Monday, July 9. It will be broadcast on multiple networks, including ABC, CBS, and CNN, and you can watch a live stream on C-SPAN.

There’s a chance he’ll tweet it out first, but thus far, he’s held off.

Trump has gradually been whittling down a November 2017 list of 25 possibilities to, reportedly, three finalists: current appellate judges Brett Kavanaugh of the DC Circuit; Amy Coney Barrett of the Seventh Circuit; and Raymond Kethledge of the Sixth Circuit.

The New York Times reported over the weekend that Senate Majority Leader Mitch McConnell (R-KY) has nudged Trump toward Kethledge or Thomas Hardiman, of the US Court of Appeals for the Third Circuit, believing they will pose the fewest obstacles to confirmation. Trump almost picked Hardiman to replace the late Justice Antonin Scalia in 2017 before deciding on Neil Gorsuch instead.

Vox’s Dara Lind, Dylan Matthews, and Jen Kirby recently wrote about all four judges’ backgrounds, as well as those of a few other candidates still possibly in the mix.

When Trump names his pick Monday evening, it will kick off what’s likely to be a contentious confirmation battle. Senate Minority Leader Chuck Schumer (D-NY) has laid out a plan for Democrats to try to stop Trump’s pick, even though Democrats are not in the majority, and Republican moderates Susan Collins (R-ME) and Lisa Murkowski (R-AK) will likely come under fierce pressure from both sides for their votes.

There is potentially a lot at stake in the coming years, including abortion rights, healthcare, gay rights, and affirmative action. Whichever candidate Trump chooses, if they’re confirmed, they likely will move the Supreme Court further to the right on those issues and others.