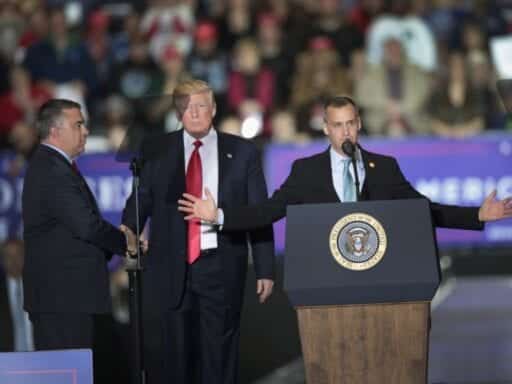 The ethical and moral standards inside the White House have dropped so low that even on the way out the door, conservatives are painting the comically corrupt former Environmental Protection Agency Administrator Scott Pruitt as a martyred hero victimized by the hysterical liberal media.

“I am just so disappointed in the president’s failure to support Scott against the angry attacks from the loony left,” Republican donor Doug Deason told Politico. “Nothing he did amounted to anything big. He was THE most effective Cabinet member by far.“

Presidential administrations are large, and it’s impossible to build one that’s entirely scandal-free. But you can vet people properly, you can drum-out malefactors who slip through the cracks, and you can build an institutional culture in which team members are rewarded for exposing impropriety rather than rewarded for covering it up.

But inside the Donald Trump White House, grifters, abusers, racists, and harassers still get hired; they lurk around the Oval Office after they’ve been found out; and even in the rare instance where they’re forced out, it’s only grudgingly.

Bill Shine, for example, came on board last week to run White House communications. He got fired from his last job as president of Fox News for his role in orchestrating a massive, multi-year cover-up of widespread sexual harassment and sexual assault of employees. The White House didn’t note this in the press release.

His wife, Darla, meanwhile, has a habit of tweeting inaccurate anti-vaccination memes and a ton of racist stuff, but leading conservative commentators take the view that, since they are nice to their friends, quoting her accurately amounts to a liberal smear campaign.

Bill and Darla Shine are wonderful people. Darla is being smeared by left wing reporters. It is shameful.

Then there’s White House staff secretary Rob Porter, who was eventually forced out once it came to light that he’d beaten up a couple of his wives but the White House could never quite get its story straight on exactly what happened, seemingly because Chief of Staff John Kelly had known the facts and tried to cover them up. About a month later, Trump decided he missed Porter and wanted him back, which didn’t happen, but Kelly obviously wasn’t punished for the coverup.

Jim Jordan, a leading House conservative, stands accused by a half-dozen former Ohio State University wrestlers of turning a blind eye to routine sexual abuse of young athletes. And both President Trump and his colleagues are rallying behind Jordan with the preposterous theory that it’s all a conspiracy cooked up by the “deep state” to shield a former FBI agent from their calumnies.

How is Jim Jordan supposed to prove that he didn’t know something 28 years ago? Could any of us? This is a deliberate attempt to knock the best oversight member of Congress off his game the week Strzok is scheduled to testify.

And this is the really striking thing about the current state of Republican Party politics — not the handful of crooks and spouse abusers who’ve been forced out of their jobs, but the petulant and foot-dragging manner in which they’ve been cashiered, the continued tolerance for so many apparent malefactors, and the evident lack of desire to even attempt anything resembling a proper house-cleaning.

The situation is an embarrassment to dignified political and policy professionals who happen to believe in low taxes and restricting the legal availability of abortion. And it’s obviously a drag on the Republican Party’s approval ratings, which remain dismal for a party presiding over peace and prosperity.

But nothing can realistically be done about it because there’s no way to hold your team to any kind of normal standard of conduct when Donald Trump is captain of the ship. According to his accusers, Trump is personally guilty of all these misdeeds and more. He simply can’t do anything about it even if he wanted to.

Trumpworld is a huge mess of scandal

The sheer volume of negative stories about Pruitt eventually made his position untenable, since he was clearly facing what amounted to a revolt from his own staff.

But it’s clear that Trump is very far from taking a “zero tolerance” approach to Cabinet corruption. Indeed, though the sheer quantity of Pruitt stories was unparalleled, the most egregious case of corruption probably lies with Commerce Secretary Wilbur Ross, whose family is deeply invested in companies with a direct stake in Ross’s decision about tariff exemptions. Ross even found a way to profit financially from journalistic exposure of one of his conflicts of interest. Not coincidentally, Ross, unlike most of the Cabinet, is a personal friend of Trump’s and had a preexisting relationship with the president.

On a more petty scale, Treasury Secretary Steve Mnuchin tried to take an expensive military jet on his honeymoon, and Interior Secretary Ryan Zinke billed taxpayers for a series of expensive trips, including one to deliver a pep talk to a donor’s hockey team. Meanwhile, Housing and Urban Development Secretary Ben Carson is embroiled in controversies regarding both overspending on office furniture and, more consequentially, the use of the HUD office to promote his family’s business interests.

Beyond the Cabinet, Trump’s bodyman was fired and is facing some kind of Secret Service investigation for “serious financial crimes” related to his proclivity for high-stakes gambling; he immediately landed with a cushy job at Trump’s reelection campaign. Corey Lewandowski, once upon a time Trump’s campaign manager, got fired over his violent behavior toward women but is now cashing-in as a lobbyist and is still very much in Trump’s good graces, and even travels with the president to campaign events.

This fish rots from the head

Corruption is not exactly new to American politics. But never before in American history has the president of the United States been a person whose entire career has been single-handedly devoted to enriching himself. Donald Trump is first and foremost a greedy person, and despite his campaign season promises to set avarice aside and “be greedy for the United States,” he has, in practice, relentlessly monetized the presidency.

He has refused to divest from his business, refused to engage in any meaningful financial disclosure, and clearly encourages businesspeople and others with interest in the policy process to cut him in on a piece of the action by holding events at his clubs and hotels. BuzzFeed News’s Tarini Parti even reported on Monday that members of his exclusive Florida beach club (annual membership fee: $200,000) have been getting choice tours of Air Force One.

We received a tip last year with the text of an AF1 tour invitation that we were told went to certain Mar-a-Lago members. The WH did not deny it at the time, but we filed a FOIA request for more docs, which eventually gave us more clues https://t.co/mckexg76la

Trump faces credible accusations of sexual assault from Summer Zervos and others, as well as a whole range of other creepy behaviors like peeping on teen beauty pageant contestants while they were changing backstage. Trump says racist stuff all the time, including in conversations with US senators, and spent years as a major proponent of anti-vaccine conspiracy theories.

This not only sends a signal to subordinates that bad behavior will be tolerated, it makes it essentially impossible for anyone in the broader conservative movement to attempt to insist on holding members of the Trump administration to a high standard of conduct.

Republicans hold a majority in the Senate at the moment and could easily confirm replacements for any officials who got fired in a house-cleaning. But nobody can articulate a plausible red line — on corruption, on sexual misconduct, on racism, on conspiracy theories, on honesty, or virtually anything else — that wouldn’t implicate the president and his family.

The result is a filthy White House that’s not going to be cleaned up any time soon.