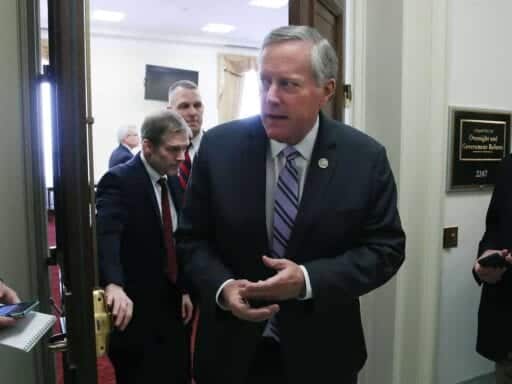 To President Donald Trump’s most ardent defenders in the ultra-conservative House Freedom Caucus, the biggest problem with Trump’s press conference with Russian President Vladimir Putin was the press.

“Given the unfriendliness of the press to the president, why should we concentrate on the press conference?” Rep. Andy Harris (R-MD) said at a press event Tuesday. “The summit in fact had the two world superpowers sit down and discuss in a civilized way for two hours privately, then two hours with staff, the wide gamut of issues that are important to this world. I call that a success. A successful summit.”

“And I disregard and discount anything that involves the mainstream media press,” he concluded.

Trump received widespread backlash from leaders in both the Democratic and Republican parties after failing to condemn Russia’s meddling in the 2016 presidential elections, and instead bashing American intelligence agencies and Democrats, at a press conference with Putin in Helsinki, Finland, Monday. Even close Trump allies like former House Speaker Newt Gingrich called it the “most serious mistake” of Trump’s presidency.

But on Tuesday, members of the Freedom Caucus found a way to make the story about liberal media bias against Trump and a partisan hunt to take down his administration.

“If there’s anything treasonous that’s gone on, it’s that active operation right now to sow distrust among our own nation in our duly elected president of the United States. It’s shameful,” Rep. Warren Davidson (R-OH) said of the investigation into Russian meddling in the 2016 election.

In the span of an hour, a panel of conservative House members managed to blame Trump’s performance at the press conference with Putin and the actions the Russian government on everyone and everything but Trump himself.

Rep. Andy Biggs (R-AZ) blamed reporters for asking questions that prompted Trump to deliver his Putin-friendly tirade against American intelligence, Hillary Clinton, and the investigation into Russian interference in the 2016 election.

“What was I disappointed in? I thought it was really odd that a reporter in Helsinki, Finland, after a conclusion of a brief summit, would ask President Trump the question that triggered this whole odd reaction that the summit was a failure because President Trump did not castigate and attack Vladimir Putin,” Biggs said.

“I thought it was also bizarre that … someone asked a question if Vladimir Putin had anything on the president,” he continued, referring to a claim in the infamous Steele dossier that the Kremlin might have compromising material on Trump. Though the veracity of that claim has not been confirmed, it has been openly speculated about by former FBI Director James Comey. “You know what gave me a little bit of angst over that? The idiocy of those two questions,” Biggs said.

His point — that the media has focused too much on Russia’s meddling in US elections — was echoed by several conservative lawmakers. Freedom Caucus co-founder Rep. Jim Jordan (R-OH) on several occasions listed what he sees as Trump’s accomplishments, from Russia sanctions to leaving the Iran deal. (It’s worth noting that Trump was vehemently opposed to putting sanctions on Russia last year, and begrudgingly signed Congress’s bill to do so.)

“This wasn’t a press conference. A press conference is where you discuss real issues,” Harris said. “You have the opportunity with two of the world’s superpowers, and instead the question is, gee, do you have anything on the president. That’s not the way the press ought to conduct itself. If I were the president, I wouldn’t hold those press conferences anymore until the press decided to get serious about dealing with the world issues, as this president is.”

Others, like Freedom Caucus member Rep. Ralph Norman (R-SC), censured the media for not treating Trump the way it treated President Obama.

Some on the panel eventually conceded that the press conference wasn’t Trump’s best, noting that Russia isn’t an ally of the United States. But that’s beside the point.

400 people got a Domino’s tattoo for free pizza. Why do brands promote these body-altering stunts?
Why Incredibles director Brad Bird gets compared to Ayn Rand — and why he shouldn’t be
John McCain, Sarah Palin, and the rise of reality TV politics
What Pelosi’s defenders miss
To practice social distancing, stay 6 feet away
Trump’s shocking Syria decision and confusing aftermath, explained