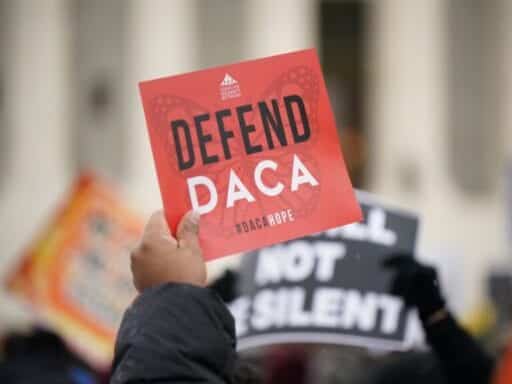 Share
Loading...
Immigration rights activists take part in a rally in front of the US Supreme Court on Tuesday. | Mandel Ngan/AFP/Getty Images

Hours ahead of the Supreme Court hearing arguments about President Donald Trump’s decision to end the Deferred Action for Childhood Arrivals (DACA) program, Trump on Tuesday morning attempted to smear DACA recipients as “hardened criminals.” But his effort has no grounding in reality.

“Many of the people in DACA, no longer very young, are far from ‘angels,’” Trump tweeted, using the same sort of language he recently used to justify abandoning the Kurds in Syria. “Some are very tough, hardened criminals. President Obama said he had no legal right to sign order, but would anyway. If Supreme Court remedies with overturn, a deal will be made with Dems for them to stay!”

Many of the people in DACA, no longer very young, are far from “angels.” Some are very tough, hardened criminals. President Obama said he had no legal right to sign order, but would anyway. If Supreme Court remedies with overturn, a deal will be made with Dems for them to stay!

In reality, however, “hardened criminals” are barred from receiving DACA protections. As Dara Lind explained for Vox last year, “[i]mmigrants aren’t eligible for DACA if they’ve committed a felony or significant misdemeanor, or three misdemeanors of any kind. DACA recipients who commit crimes can be stripped of their protections and deported.”

While it’s true that being arrested doesn’t necessarily bar someone from receiving DACA, contrary to Trump’s claim, there’s evidence DACA recipients are actually arrested at rates far lower than US residents.

According to a United States Citizenship and Immigration Services (USCIS) report released last year and estimates from social science research, the arrest rate for DACA recipients may be 78 percent below the national average, as the Cato Institute noted. So Trump’s attempt to smear them as criminals turns reality on its head. And while some DACA recipients are “no longer very young,” the most common age at which they entered the country was 3 — meaning that many of them have only lived as sentient humans in the United States, yet are now facing the threat of deportation to countries they’ve never known.

Trump’s tweet on Tuesday stands in contrast to what he’s said about DACA recipients earlier in his presidency. In September 2017, when he first announced he was ending the program, Trump said of DACA recipients that “I have a great heart for these folks we’re talking about. A great love for them.” Weeks later, he posted a tweet questioning why anybody would want to deport DACA recipients in the first place.

Does anybody really want to throw out good, educated and accomplished young people who have jobs, some serving in the military? Really!…..

But now, just ahead of SCOTUS taking up the case, Trump is trying to generate a narrative that DACA recipients aren’t so great after all.

He’s also hedging his bets by saying that if SCOTUS goes along with his move to end the program, “a deal will be made with Dems for them to stay.” But if the recent past is precedent, Trump’s bargain will involve forcing Democrats to spend exorbitant amounts of money on his border wall in exchange for him signing a bill providing DACA recipients with long-term legal protection.

As my colleague Nicole Narea explained, there are nearly 670,000 DACA recipients in the country, but SCOTUS’s decision doesn’t just potentially affect them. It also impacts the 256,000 children of DACA recipients who could potentially lose their parents to deportation. Trump, however, has already proven that he’s willing to separate families toward the end of making America whiter.

New York Comic Con 2018: watch all the movie and tv trailers
Could these drugs save your relationship?
Trump signs an executive order on prosecuting those who destroy monuments
Democrats have an ambitious plan to save American labor unions
More than 20 are dead in a catastrophic California boat fire
Leigh Bardugo turns Yale into a haunted, haunting fantasy world in Ninth House