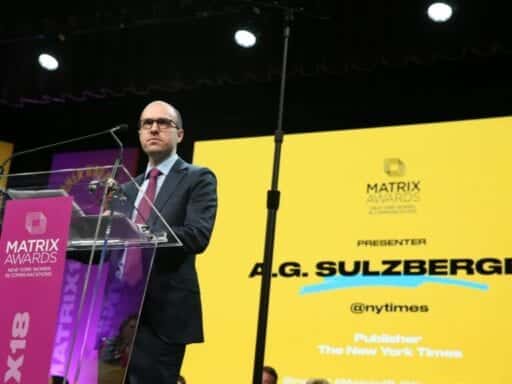 The Times’s publisher warned Trump about the dangers of calling the press the “enemy of the people.” He’s still doing it anyway.

The latest chapter of Donald Trump versus the media unfolded over the weekend in the form of a back-and-forth between the president and the New York Times. The subject: an off-the-record meeting between Trump and the Times’s publisher, A.G. Sulzberger, that the president put on the record with a tweet.

On Sunday morning, Trump tweeted that he’d had a “very good and interesting meeting” at the White House with Sulzberger. He said they talked about the “vast amounts of Fake News being put out with the media” and again referred to the press as the “enemy of the people.”

Had a very good and interesting meeting at the White House with A.G. Sulzberger, Publisher of the New York Times. Spent much time talking about the vast amounts of Fake News being put out by the media & how that Fake News has morphed into phrase, “Enemy of the People.” Sad!

The Times subsequently released a statement confirming that Sulzberger and James Bennet, the editorial page editor of the Times, had indeed met with Trump in the Oval Office on July 20. The publication said the White House had requested the meeting — which is not unusual — and that Trump aides requested the meeting be off the record, also par for the course.

But The Times’s version of what transpired in the meeting differed significantly from Trump’s tweet. Sulzberger said his main purpose for accepting the sit-down was to “raise concerns about the president’s deeply troubling anti-press rhetoric.”

Trump has consistently attacked the media throughout his presidency and called the press the “enemy of the people.”

Sulzberger said he told Trump his language was “not just divisive but increasingly dangerous.” While he said “fake news” is “untrue and harmful,” he emphasized he’s more concerned about Trump labeling journalists the “enemy of the people.”

“I warned that this inflammatory language is contributing to a rise in threats against journalists and will lead to violence,” Sulzberger said. Just last month, five people were killed in a shooting at the Capital Gazette offices in Annapolis, Maryland. Sulzberger also warned that Trump’s attacks on the press have repercussions abroad, where regimes use it to justify “sweeping crackdowns on journalists.”

Sulzberger separately told the Times in an interview that he told Trump newspapers had started posting armed guards outside their offices because of increased threats against journalists. He said Trump was surprised they didn’t already have guards.

Statement of A.G. Sulzberger, Publisher, The New York Times, in response to President Trump’s tweet about their meeting https://t.co/N6soZfxQZ7 pic.twitter.com/W9mFxCF0tp

Soon after Sulzberger’s statement was released, Trump appeared to respond — again on Twitter — to the statement. He claimed it’s the media that puts lives at risk in revealing the “internal deliberations of our government.” He decried negative coverage of his administration and took a swipe at the “dying newspaper industry,” specifically citing the “failing New York Times” and the “Amazon Washington Post,” nicknames he often uses to refer to the outlets. (The Post is owned by Amazon CEO Jeff Bezos.)

“No matter how much they try to distract and cover it up, our country is making great progress under my leadership and I will never stop fighting for the American people!” he wrote.

…accurately. 90% of media coverage of my Administration is negative, despite the tremendously positive results we are achieving, it’s no surprise that confidence in the media is at an all time low! I will not allow our great country to be sold out by anti-Trump haters in the…

…and the Amazon Washington Post do nothing but write bad stories even on very positive achievements – and they will never change!

Sulzberger said he felt like Trump heard him out. If he did, Trump isn’t showing it.

Trump has battled with the media for years, and he’s often taken issue specifically with the Times, his hometown paper, and the Post.

Much of the battle has been superficial — he made up “Fake News Awards” and “awarded” several to the Times and the Post in January, and he’s often criticized the publications and specific journalists at them for their reporting. He’s threatened lawsuits and changes to libel laws, but he hasn’t taken any specific action. Earlier in July, he suggested that Twitter delete the accounts of the Times and the Post.

Some of his actions have been more concrete. The Trump administration seized phone records from New York Times reporter Ali Watkins as part of a federal investigation into leaks of classified information. And more broadly, there are growing concerns that Trump’s anti-media rhetoric might inspire violence against journalists and further erode trust in the press.

Sulzberger in an interview with the Times said by the end of his meeting with Trump on July 20, he felt that the president had listened to his arguments. He said Trump told him he was glad he had raised the issues he did and would think about them.

Whatever thinking Trump did, they don’t appear to have inspired a real change in his behavior.

Since the meeting, Trump has tweeted about the “fake news” and “corrupt media” on multiple occasions, including in the context of the fallout from his Helsinki meeting with Russian President Vladimir Putin, who has taken part in a dangerous crackdown on the press in Russia.

I had a GREAT meeting with Putin and the Fake News used every bit of their energy to try and disparage it. So bad for our country!

Democrats, who want Open Borders and care little about Crime, are incompetent, but they have the Fake News Media almost totally on their side!

In a speech at the Veterans of Foreign Wars Convention in Kansas City, Missouri, last week, Trump lambasted the media over its coverage of his trade policies. “Just stick with us. Don’t believe the crap you’re seeing from these people, the fake news,” he said. The VFW subsequently issued an apology for some of its members’ reaction to boo the press.

At the same event, Trump told the crowd that what’s in the news is not going on at all. “Just remember: What you’re seeing and what you’re reading is not what’s happening,” he said.

”Mentally I am not in a good place”: Students struggle with school amid election anxiety
The contemporary battle over “religious liberty,” explained
The First Purge completes the franchise’s transition to full-on social horror
Mike Pompeo’s big announcement about Israeli settlements, briefly explained
Trump on Supreme Court case that could overturn Obamacare: “I hope they end it”
Mitch McConnell’s shameless pursuit of power, explained