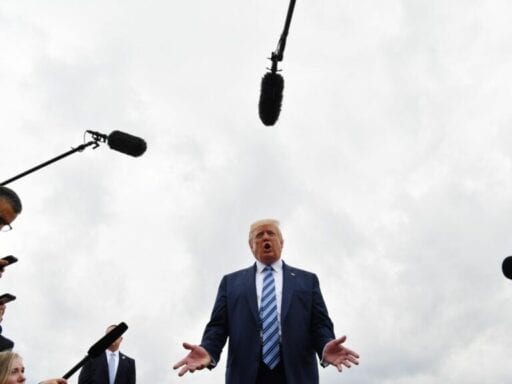 Share
Loading...
Trump speaks to the press at Morristown Municipal Airport in Morristown, New Jersey, on August 13, 2019 as he departs his Bedminster club for Pennsylvania. | Nicholas Kamm/AFP/Getty Images

The president will believe anything that’s useful to him.

President Donald Trump’s defense of spreading a misinformed conspiracy theory about Jeffrey Epstein’s death is that the guy he retweeted has a lot of Twitter followers.

During a brief question-and-answer session with reporters outside his golf resort in New Jersey on Tuesday, Trump was asked about a decision he made Saturday — hours after Epstein, a wealthy sex offender with prominent connections on both sides of the aisle who was awaiting trial on sex trafficking charges, was found dead by apparent suicide in his jail cell in Manhattan — to retweet a post from Terrence K. Williams suggesting that the “Clinton crime family” was somehow involved. In the same tweet, Williams falsely claimed Epstein was on suicide watch at the time of his death.

“That was a retweet. That was from him, it wasn’t from me,” continued Trump, who has recently retweeted QAnon and Pizzagate accounts. “But he’s a man who has half a million followers. A lot of followers, and he’s respected … so I think I was fine.”

Trump argues his retweet of a @w_terrence tweet suggesting the Clintons murdered Jeffrey Epstein “was fine” because Williams is “a highly respected conservative pundit. A big Trump fan. And that was a retweet … he’s a man who has half a million followers.” pic.twitter.com/7fCwb59T3L

Despite what Trump would have you believe, there’s no evidence that Williams — who describes himself on Twitter as “Actor• Comedian•Commentator” — is respected. In fact, before Trump retweeted him, he was most recently in the news for racist jokes he made during a Fox News appearance about journalist Sarah Jeong that were so offensive, the interview was abruptly cut off.

Shortly after puffing up Williams as something he’s not, Trump suggested there’s some merit to the conspiracy theory he spread — one that directly contradicts the conclusion of Trump’s own DOJ, which was holding Epstein, that he died by “apparent suicide.”

While Trump acknowledged he has “no idea” whether the Clintons were involved, he quickly added that “I know [Bill Clinton] was on [Epstein’s] plane 27 times … the question you have to ask is, did Bill Clinton go to [Epstein’s] island? … I was never there … if you find that out, you’re going to know a lot.”

REPORTER: Do you really think the Clintons are involved in Epstein’s death?

TRUMP: “I have no idea. I know he was on his plane 27 times…the question you have to ask is, did Bill Clinton go to the island?…I was never there…if you find that out, you’re going to know a lot.” pic.twitter.com/2okvjaFv2w

The notion that the Clintons had anything to do with the death of an inmate who was in the custody of a Justice Department headed by Trump’s handpicked attorney general is absurd on its face, even if it does accord with conspiracy theories pushed by right-wingers for decades now.

But the conspiracy theory is useful to Trump on at least two levels. First, it demeans political enemies of his, and the president rarely passes up an opportunity to do that. Second, it deflects from questions surrounding his own ties to Epstein, such as his 2002 quotes to New York magazine about how Epstein was a “terrific guy” who had similar tastes in women as he does.

“It is even said that he likes beautiful women as much as I do, and many of them are on the younger side,” Trump said at the time.

Trump’s retweet and his defense of it illustrates how the concepts of “truth” and “accuracy” operate in his mind. He thinks the US intelligence community could be wrong about Russian meddling because Vladimir Putin told him so. The nine women who accused Alabama Senate candidate Roy Moore of sexual misconduct may have been lying because Moore said so.

What do all those conclusions have in common? As dubious as they may be, they validate Trump and undermine a prevailing consensus that could undermine him — Russian interference casts doubt on the legitimacy of his election; believing sexual misconduct accusers raises questions about why the 20-plus accusations made against him have gone largely unaddressed.

And so he runs with whatever conclusions are useful for him in the moment, only to come up with rationalizations for them when he’s pressed on his flimsy reasoning — even if it means describing someone as a “respected pundit” when they’re best known to the general public for cracking offensive jokes.