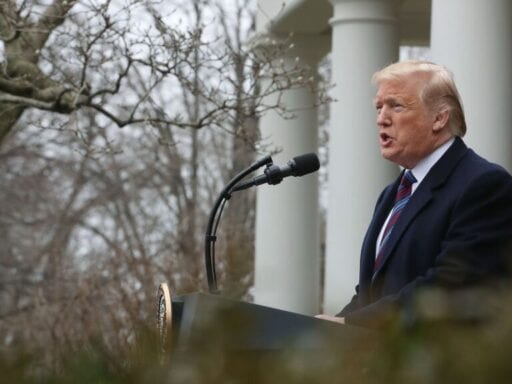 On Friday afternoon, President Donald Trump and Democratic leaders Chuck Schumer and Nancy Pelosi met at the White House in hopes of working toward a deal to end a government shutdown that is now on the verge of stretching into its second week.

Schumer emerged from the meeting and told reporters that Trump had threatened to keep the government shut down for “a very long time — months or even years.” A short time later, Trump held a news conference in the Rose Garden that encapsulated all the traits that make him next to impossible to negotiate with.

Trump is detached from reality

Trump has received no money from Congress to build a border wall. While the president wants Americans to believe that the lack of a wall presents a dire national security risk, there is no evidence terrorists are taking advantage of the situation to drive into the country in desolate areas along the border where there are no official ports of entry.

During the news conference, Trump claimed that in California, the government has just finished constructing “new walls, beautiful walls, steels walls.” But he added that “we have terrorists coming through the southern border” — his implication being that the only thing stopping them are the segments of the (imaginary) wall that have already been built.

Congress has not appropriated a single cent for him to build “new walls.” He’s untethered from reality. pic.twitter.com/fC1HR9PTwN

At another point, Trump made the extremely dubious claim that “some” previous presidents have told him privately they wish they would’ve built a border wall during their terms.

“This should have been done by all of the presidents that preceded me and they all know it,” he said. “Some of them have told me that we should have done it.”

There are four living ex-presidents. President Trump says “some of them” have told him we should have built a border wall in the past. pic.twitter.com/ReFDDlmKmp

Following the recent passing of George H.W. Bush, there are only four ex-presidents still alive — Jimmy Carter, Bill Clinton, George W. Bush, and Barack Obama. It’s hard to imagine any of the Democrats have had recent private conversations with Trump — let alone expressed regret to him that they didn’t build a border wall.

Trump also seems to believe that the same Democrats who steadfastly refuse to give him any money for a border wall care whether he constructs it out of steel or concrete.

“The steel is probably more expensive than the concrete, but I think we’re probably talking about steel because I really feel the other side feels better about that, and I can understand what they’re saying,” Trump said. “It is more expensive.”

Later, Trump said that “if we do what the Democrats want, all of the border things that we’ll be building will be done right here in the good old USA by steel companies that were practically out of business when I came in to office as president, and now they’re thriving.”

But House Speaker Nancy Pelosi has been clear that she thinks a border wall is an “immorality” — whether it’s built out of concrete, steel, or something else entirely.

“It has nothing do with politics. The wall, in my view, is an immorality. It is a waste of money. … It’s a diversionary tactic,” she said during a news conference on Thursday. “We are not doing a wall.”

Trump also claimed that McConnell wasn’t at the Rose Garden presser “because he’s running the Senate.”

Except the Senate isn’t in session.

And McConnell’s spokesman told reporters he’d have stayed *if he’d known* about the presser.

Tariffs are taxes paid by importers on imported goods. So, for instance, the cost of a US-imposed tariff on a Chinese product is paid by the US company purchasing that product from China; it is not paid by the Chinese government.

Yet on more than one occasion during the news conference, Trump claimed that the US has taken in “billions and billions of dollars in tariffs from China.”

Trump’s lack of policy knowledge goes beyond tariffs. He repeatedly failed to justify his claim that a trade deal that hasn’t yet been approved by Congress (USMCA, the revised version of NAFTA the Trump administration negotiated with Mexico and Canada) will somehow result in Mexico fulfilling his campaign promise to pay for a border wall.

He also lamented that Apple, which announced lower earnings than expected this week, won’t simply relocate all of its production to the US, despite labor cost factors that make that a virtual impossibility at present.

TRUMP: “Don’t forget. Apple makes their products in China. I told Tim Cook, a friend of mine, make your product in the US. Build those big, beautiful plants that go on for miles. Build those plants in the US. I like that even better…China is the biggest beneficiary of Apple.” pic.twitter.com/tNK6OZVeDo

“Don’t forget this — Apple makes their product in China. I told Tim Cook — who is a friend of mine, who I like a lot — make your product in the United States,” Trump said, referring to Apple’s CEO. “Build those big, beautiful plants that go on for miles, it seems. Build those plants in the US. I like that even better. … China is the biggest beneficiary of Apple, more than us.”

During an Oval Office event with Pelosi and Schumer last month, Trump unequivocally said he would own a government shutdown if one happened.

“I am proud to shut down the government for border security, Chuck,” he said. “I will take the mantle. I will be the one to shut it down. I’m not going to blame you for it.”

Since then, however, Trump has tried to shift blame onto Democrats.

The Democrats now own the shutdown!

During the news conference, Trump was asked by NBC’s Hallie Jackson if he is “still proud to own this shutdown.”

Trump responded by characterizing his comments in December as “just words.”

.@HallieJackson: “Are you still proud to own this shutdown?

Pres. Trump: “I’m very proud of doing what I’m doing. I don’t call it a shutdown. I call it doing what you have to do for the benefit and safety of our country.” pic.twitter.com/lWh4sm05R8

Trump also didn’t seem concerned about the optics of his Cabinet members receiving a $10,000 raise this weekend, as the Washington Post reported Friday, at the same time that thousands of federal workers are furloughed because of the shutdown.

Questioned whether he’d ask Cabinet members to give their raises back until the shutdown is resolved, Trump hemmed and hawed, and suggested without evidence that federal workers support his position.

If Democrats don’t ultimately bend to his will, Trump said he may grant himself emergency powers to build the wall without congressional approval.

“I can do it if I want,” Trump said. “We can call a national emergency because of the security of our country, absolutely … I may do it.”

Trump says he “may” grant himself emergency powers to build the wall.

Trump’s case for declaring such an emergency would be stronger if there was evidence that the lack of a border wall presents a national security risk — but there isn’t. That reality, combined with the fact that Congress hasn’t appropriated money for the wall, indicates Trump would face legal challenges if he goes this route.

“I don’t think that this is a real possibility given the restrictions already in place on how money can and cannot be used,” Todd Harrison a defense budget expert with the Center for Strategic and International Studies, told ABC News. “It is against the law to use money for purposes other than it was appropriated without getting prior approval from Congress. I don’t think declaring a national emergency would make a difference in this case, so I don’t think their theory holds much water.”

During the news conference, Trump also indicated he has no qualms about using eminent domain to seize large swaths of land for the wall — a position that puts him at odds with factions of his own party.

“It’s hard to pin the president down on the facts”

During an interview on Thursday, Pelosi explained why she thinks it’s difficult to negotiate with Trump.

“When you’re negotiating with someone, you have to know, you stipulate to some fact,” she said. “It’s hard to do that with the president because he resists science, evidence, data, truth. It’s hard to pin the president down on the facts.”

One thing Trump was clear about during Friday’s news conference is that he wants $5.6 billion for border security as part of a deal to end the shutdown. While he described his meeting with Schumer and Pelosi as “very productive,” he couldn’t cite a single specific breakthrough that resulted from it.

Pelosi, on the other hand, described the meeting as “contentious.”

Sports Illustrated’s new bosses defend why they bought a brand and not a company
Vox Sentences: South Africa to withdraw, North Carolina to redraw
Republicans showed why Congress won’t regulate the internet
How to read that coronavirus chart
The rise of working-while-working out from home
Vox live results: Biden wins Pennsylvania