Trump’s catastrophic failure on testing is no joke 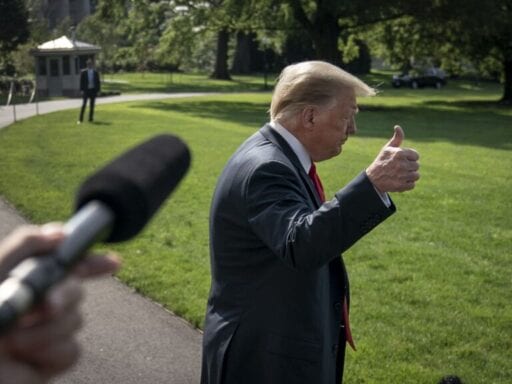 The president is continually more focused on good numbers than good policy.

The president confessing to a deliberate effort to sabotage Covid-19 testing would, of course, be a huge scandal, so his senior staff immediately began explaining that he was just joking. But on Tuesday in an impromptu interview, Trump said “I don’t kid,” and in a tweet that morning he reiterated what appears to be his real view, which is that whether or not he has actually been sabotaging testing, he kind of wishes he was because all case growth, in his opinion, is an artifact of testing.

Cases are going up in the U.S. because we are testing far more than any other country, and ever expanding. With smaller testing we would show fewer cases!

This is not accurate. Not only have the raw count of positive tests started to rise again, the share of tests that are positive has also begun to rise. And in certain key states, hard numbers like hospitalizations are also on the way up. But Trump’s clinging to this talking point and his ambivalent feelings about tests are anything but a joke — they’ve been a characteristic element of his catastrophic leadership failure from the early days of the crisis.

In the earliest days of the outbreak in the United States, Trump quipped that he didn’t really want to see sick passengers onboard the Grand Princess cruise ship come ashore for treatment because “I like the numbers where they are.”

Like his most recent line, that was, on some level, a joke. And his administration bowed to medical expertise and brought the US citizens on the ship to shore. But a person makes a joke over and over and over again to express something real — in Trump’s case, he doesn’t like to make policy changes that generate statistics that reflect poorly on him.

In early March, when America’s testing capacity was plainly inadequate, Trump spent a lot of time touting the allegedly low case numbers rather than focusing on improving testing to get a handle on the situation. Indeed, the very same day as he made the Grand Princess quip, he infamously insisted that “anybody that wants a test can get a test” when this was obviously untrue. The testing failures to that point were more widespread and more complicated than simply Trump doing a bad job. But as the extent of the problem became clear, Trump did not signal any real desire to fix it — claiming things were fine and demonstrating a clear preference for rosy numbers over accurate numbers, which experts have warned is an approach that could backfire.

While testing has improved since then due to grassroots demand, congressional insistence, and state policy action, it’s still not where it needs to be, and the president keeps expressing ambivalence.

Trump wields testing as an excuse rather than as a tool

Case levels in the United States are now back up to where they were in late March.

Nevertheless, it is misleading to say that the outbreak is as widespread today as it was in late March because test volumes have increased substantially. Back then, because of supply constraints in testing, we were clearly missing a lot of cases. Today that is a much less common problem, so the official case count reflects a larger share of the true case count, and today’s true case count is consequently lower than where it was at the previous official peak.

That’s the ray of truth in things like Trump’s May 15 quip that “if we didn’t do any testing we would have very few cases,” as well as his more recent remarks.

There is, in other words, a true perverse element in the politics of disaster response. To be maximally effective, you need accurate information. But the media likes simple objective indicators like “this is the number of positive test results,” so to an extent, you get punished for doing the right thing. But as a political leader, you’re supposed to do the right thing, not just make wry observations about life’s little ironies. Trump, having essentially devolved responsibility for testing to the states, now just likes to wield his observation about test volumes being a “double-edged sword” as a way to spin away bad news.

In reality, however, a glance at the high and rising positivity rates in Texas, Florida, and Arizona makes it clear that the Sunbelt outbreak currently worrying people is not an artifact of elevated testing. And even as the aggregate national testing numbers have improved, many states continue to lag, and in keeping with his general philosophy of abdication, Trump isn’t doing anything to rush extra test capacity to places that need it.

This is all because Trump seems to see testing as a political football rather than as a useful tool for controlling the spread of coronavirus. There are basically two ways to get an outbreak under control. One is by restricting activities so that silent spreaders don’t accidentally infect others. The other is to test people, isolate positive results, then track their contacts and either test them all and isolate the positives or isolate them all until they test as infection-free.

Trump doesn’t like the activity restrictions idea. He’s encouraged protests against governors who try to impose restrictions, and is blocking the kind of aid to state and local governments that would make restrictions sustainable. But we also still don’t have a real national strategy for tests. They’re not available in sufficient quantity when it counts, the turnaround time on most of the publicly available tests is too slow to make them fully useful as screening tools, and there are no initiatives underway to routinely test likely spreaders, randomly test population samples, or otherwise use them for non-diagnostic purposes.

This has left the country without much hope of achieving the kind of success Korea or Germany has had in containing and reversing outbreaks, leaving the US essentially to just hope for the best in terms of breakthroughs in treatment and vaccination. It’s an extremely scary situation, and there’s nothing funny about it.

Plague journals and the need to capture time
The bare minimum America could do to expand health coverage
Why the term “BIPOC” is so complicated, explained by linguists
A major Los Angeles fire was sparked by a tree branch hitting a power line
The enormous advantage that the Electoral College gives Republicans, in one chart
Thousands of Americans across the US are peacefully marching against police violence