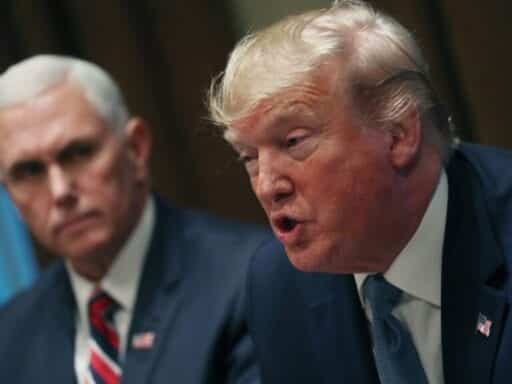 Trump’s extremely false analysis of the report shows how his conspiracy theories are impervious to fact-checking.

During a White House press conference shortly after the release of Justice Department Inspector General Michael Horowitz’s report on the Russia investigation, President Donald Trump turned reality on its head by characterizing the report as “far worse than I ever would’ve thought possible,” claiming it contained evidence that the investigation into his campaign was “concocted.”

“This was an overthrow of government, this was an attempted overthrow — and a lot of people were in on it,” Trump said, ignoring the reality that the investigation began during his campaign, when he was still a private citizen.

But the IG report does not conclude that Trump was the victim of an attempted “overthrow.” Instead, it says investigators “did not find documentary or testimonial evidence that political bias or improper motivation influenced the decisions” that led to the investigation.

The report also found that the FBI had an “authorized purpose” when it opened the probe during the summer of 2016. It does detail “serious performance failures” by low-level officials, but it also rebuts the notion that the investigation was tainted by political bias.

In short, Horowitz’s main takeaway is that there continues to be no basis for Trump’s flimsy victimhood conspiracy theories that the investigation was nothing more than a “deep state” plot to take him down. But if you thought that conclusion would stop Trump from pushing them, he immediately proved you wrong.

TRUMP on the IG report: “This was an overthrow of government, this was an attempted overthrow — and a lot of people were in on it.” (Trump was a private citizen when the Russia investigation began.) pic.twitter.com/g8saDzcs5F

Trump’s statements have no basis in reality, and even Fox News’s Chris Wallace acknowledged this. During a segment that aired right after Trump’s remarks, Wallace told viewers that “some of the bigger claims, some of the headlines that had been made by President Trump and [Attorney General] Bill Barr, have not been borne out, and some of the things that were being said just now in that Cabinet Room meeting were not borne out.”

“Some of the bigger claims, some of the headlines that had been made by President Trump and Bill Barr have not been borne out and some of the things that were being said just now in that cabinet room meeting were not borne out” pic.twitter.com/Q4xIzdYKnX

But in an illustration of how impervious to fact-checking the conspiracy theories pushed by Trump and his defenders are, even as Wallace debunked them, Fox News host Sean Hannity claimed on his radio show that “everything we said, everything we reported, everything we told you was dead-on-center accurate. And the mob and the media has missed what is the biggest abuse of power [and] corruption scandal in the history of the country.” In fact, the IG report demonstrates the opposite.

Barr, for his part, released a statement that essentially disputed the report’s findings: “The inspector general’s report now makes clear that the FBI launched an intrusive investigation of a US presidential campaign on the thinnest of suspicions that, in my view, were insufficient to justify the steps taken.” But the report actually says exactly the opposite — that the investigation was justified.

Trump, meanwhile, tipped his hand about where things are headed when he said, “I look forward to the Durham report, which is coming out in the not-too-distant future. He’s got his own information.” The president was referencing former US Attorney John Durham, whom Barr appointed to conduct a separate investigation into the origins of the Russia probe — an investigation that recently became criminal in nature.

Though Horowitz was unwilling to do Trump’s political bidding, there are indications that Durham might be up for the task. In an unusual move, given the ongoing nature of his investigation, Durham responded to the IG report with a statement, in which he said his team had advised Horowitz in November that “we do not agree with some of the report’s conclusions as to predication and how the FBI case was opened.”

The controversy around a black man killed by police in his own home, explained
The backlash against Michael Che and Colin Jost as Emmy hosts, explained
Trump’s surprising resilience with Hispanic voters, explained
A rare solar storm may bring the Northern Lights south to the US
The Trump administration forced Apple to turn over lawmakers’ data. Democrats are outraged.
As coronavirus cases surge, hospitals are beginning to be overwhelmed