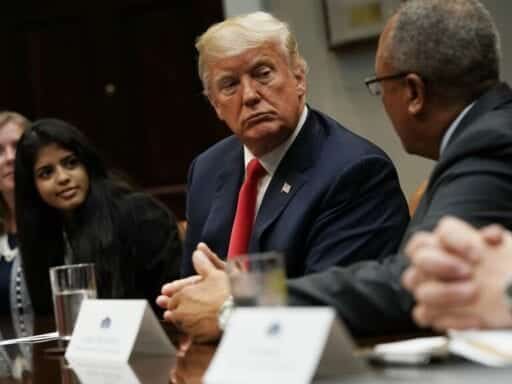 Speaking to reporters briefly at the White House, Donald Trump repeated the most consequential of the many lies of his presidency — that the federal government did a “fantastic job” in its response to last year’s Hurricane Maria catastrophe that killed nearly 3,000 people in Puerto Rico.

Trump defends the government response in Puerto Rico the day after Puerto Rico raised its death toll from Hurricane Maria to 2,975.

“I think we did a fantastic job in Puerto Rico … I think most of the people in Puerto Rico really appreciate what we’ve done.” (via ABC) pic.twitter.com/r3K2ylTB9w

That’s a line that Trump has maintained ever since he made a belated visit to the island after two straight weekends golfing, followed by the observation that “it’s been incredible the results that we’ve had with respect to loss of life.”

In fact, the results they had with respect to the loss of life were awful. Awful in terms of the sheer number of dead, but also awful in terms of the reluctance from the very beginning to deliver an accurate death count. That the disaster turned out to be deadlier even than Hurricane Katrina is shocking, and the fact that it took the government until this week to finally acknowledge that fact is an entirely separate shock.

And it’s a reminder that while Trump’s time in office has shown that the macroeconomy can remain remarkably robust in the face of a president who has no idea what he’s doing, there are other aspects of national affairs where this is not the case.

Trump is a president who can’t even properly execute a relatively simple presidential task like leading the national mourning for the late Sen. John McCain in an appropriate way. Faced with something genuinely difficult like a strong hurricane hitting an island whose electrical infrastructure was already in rocky shape, he just totally failed with catastrophic consequences.

Trump’s instinct from Day 1 has been to simply turn the island’s devastation into another front in culture-war politics, a strategy that has helped keep his political career alive despite his lack of substantive command of the job.

The rest of us just have to pray for good luck.

Our TV-addicted president botched the job

That Trump spends an almost inhuman amount of time watching cable television is something we now all take for granted as part of the background noise of our lives. What’s often forgotten is the role that Trump’s preference for television over proper briefings played in creating the crisis.

But back in 2017, Hurricanes Harvey and Irma were massive cable television events that dominated coverage on all the networks. Hurricane Maria, by contrast, was relatively invisible on cable, according to reporting from Dhrumil Mehta at FiveThirtyEight.

“People on TV news shows spoke significantly fewer sentences about Hurricane Maria than about Hurricanes Harvey and Irma,” he writes, and “the spike in conversation about Puerto Rico right as the hurricane hit was also much smaller than the spike in mentions of Texas and Florida.”

Cable producers surely had their reasons for this. But something anyone in the media could tell you is that cable producers’ news judgment is not an infallible guide to the substantive importance of various stories. In particular, a broad range of issues — potentially including natural disasters in outlying US territories — have an asymmetrical quality to them. If handled appropriately, most people won’t care that much; but if botched, it eventually becomes a big deal.

This is why presidents have traditionally relied upon staff and the massive information-gathering capabilities of the American government for information rather than letting television set the agenda. Trump has a different philosophy, however, and spent the post-storm Saturday glued to his television and letting the hosts of Fox & Friends drag him into an ill-advised Twitter spat with NBA star Steph Curry and various NFL players.

The Washington Post reports that by Monday, Trump “was becoming frustrated by the coverage he was seeing on TV.”

A slow response crippled Maria recovery from the start

By the time Trump’s sluggish response became a national issue, the White House was full of excuses.

This is all true, and it goes to show that being president of the United States is a difficult job. But all of the issues that the federal response is wrestling with were known in advance. The world had days of warning that a hurricane was heading toward Puerto Rico. The perilous state of the island’s electrical grid has been apparent for years — as has the weak financial health of its electrical utility and municipal governments.

A president who was focused on his job could have asked in advance what the plan was for a hurricane strike on Puerto Rico. He would have discovered that since Puerto Rico is part of the United States, FEMA is the default lead agency, but it’s the US military that has the ships and helicopters that would be needed to get supplies into the interior of a wrecked island. And he could have worked something out.

Instead, he didn’t get worked up about Puerto Rico until more than a week after the storm hit, when he saw the mayor of San Juan lambasting him on television. He lashed out with his usual playbook — one that will only make things worse.

Trump turns everything into a culture war

The substantive problem that Trump — and America — is now facing is that you can’t go back in time and do the preparatory work that should have been done. You can’t pre-position satellite phones, schedule timely visits from top administration officials, or quickly dispatch ships and helicopters once you’re starting with an eight-day lag. The best you can do is admit you were too slow and throw everything you’ve got at it.

Defensiveness and counterpunching are. So instead of fixing things, Trump got into a fight with the mayor of San Juan and inflected his attacks on her with some ugly racial implications.

…Such poor leadership ability by the Mayor of San Juan, and others in Puerto Rico, who are not able to get their workers to help. They….

…want everything to be done for them when it should be a community effort. 10,000 Federal workers now on Island doing a fantastic job.

The Puerto Rico debate then got embroiled in America’s ongoing debate over whether the real problem is the president being racist, or liberals being too eager to accuse white people of racism. Since most Americans are white — and since white people are overrepresented among voters, and white voters are further overrepresented in the congressional map — this political argument over racism arguably helps Trump politically, and thus solved the political downside to having botched the response to a huge disaster.

Now, nearly a year later, Trump just insists that everything is fine, as if the sheer force of denial can make problems go away.

In the intervening months, we’ve seen the botched implementation of the cruel family separation policy, a tariff war with China that has no clear goals, a weird international crisis related to Montenegro’s NATO membership, an inability to get the White House flags flown at half-staff to recognize the death of a war hero senator, and dozens of other examples of an administration that simply isn’t up to doing the job it was hired to do.

To a perhaps surprising extent, it turns out that the basic machinery of the American government continues to more or less function under these circumstances, and with some reasonable people tapped to run the Federal Reserve, the national economy manages to keep chugging along nicely as well.

But things happen in life — sometimes very bad things — that test a president’s mettle, and we saw in Puerto Rico that Trump isn’t up to the test. Bismarck supposedly said that God has a special providence for fools, drunks, and the United States of America. If we’re lucky, he’ll be proven right, and nothing much else bad will happen for the next three years. If not, buckle your seat belts.