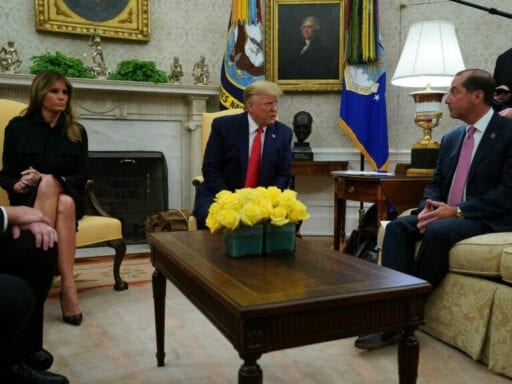 The potential benefits, risks, and unintended consequences of the White House’s vaping crackdown.

The White House announced Wednesday that it’s planning to ban flavored e-cigarettes in the coming months — a sign that the administration is taking the problem of youth vaping seriously.

“People are dying with vaping so we’re looking at it very closely,” President Donald Trump said at a press conference in the Oval Office.

The announcement came after preliminary new evidence showed that, for another year, youth vaping has increased: More than a quarter high school students have used e-cigarettes in the past 30 days — up from 21 percent in 2018.

Trump and health officials are also contending this week with a mysterious vaping-related respiratory illness outbreak. Six people have died and some 450 have fallen ill in more than 30 states across the country.

With Melania Trump, Health and Human Services Secretary Alex Azar and acting Food and Drug Administration commissioner Ned Sharpless at his side, the president noted, “We can’t allow people to get sick, and we can’t have our youth be so affected.”

I am deeply concerned about the growing epidemic of e-cigarette use in our children. We need to do all we can to protect the public from tobacco-related disease and death, and prevent e-cigarettes from becoming an on-ramp to nicotine addiction for a generation of youth. @HHSGov

Azar explained that it would take several weeks for the FDA to release its final plan for banning the products, after which there will be a 30-day delay until the new policy goes into effect.

In May 2020, companies can apply to the FDA to bring their flavored e-cigarettes back on the market, but they’ll have to be approved by the regulator. “These [FDA] decisions require companies to prove that marketing of those products is appropriate for the protection of public health,” said David Liddell Ashley, a former FDA official currently on faculty at Georgia State University. “Products that are very attractive to kids will have a very hard time proving that.”

There’s ample evidence that flavors are among the top draws to vaping for adolescents. That’s why the former FDA commissioner, Scott Gottlieb, who made e-cigarette and tobacco policy a major focus during his time leading the agency, endorsed the plan. “Ultimately, you need to reduce the access and appeal these products have to kids,” Gottlieb told CNBC Wednesday, “and by taking flavor products off the market … you’re going to accomplish that.”

But some experts are calling the proposed policy a “double-edged sword” for adult smokers. Smoking remains the leading cause of preventable death, killing nearly half a million people in the US every year, and vaping is the most common method of smoking cessation. Though the best evidence suggests it’s no panacea, it is helpful for some — and the role flavors play in that isn’t clear.

“When I talk to the smokers we treat here,” Andrew Hyland, chair of the department of health behavior at Roswell Park Comprehensive Cancer Center, told Vox, “I hear compelling testimonials from people who tried to quit smoking many times and nothing worked until they tried vaping. Flavored e-cigarettes may help some cigarette smokers quit.”

So it’s possible that in removing flavors to make e-cigarettes less appealing to young people, they’ll also be less appealing to adult smokers. And FDA could also go even further if it wanted to have an even greater impact on smoking- and vaping-related disease and death.

The White House isn’t the only administration going after vape flavors. In September, Michigan became the first state to outlaw e-cigarette flavors. New York, Massachusetts, and California are eyeing similar measures, according to the New York Times. And influential public health advocates, including Mike Bloomberg, have come out in favor of banning flavors as a way to curb the youth vaping epidemic.

The decline in youth smoking is one of the great health victories of this century. Now, e-cigarettes threaten to reverse that progress.

There’s no question that even though vape devices were initially marketed as stop smoking tools, they’ve been embraced by young people. And the marketing around flavors are a big part of that.

“We know that use of flavored tobacco products in general has a very clear age gradient, with the youngest users using flavored product,” said Cristine Delnevo, the director of Rutgers’s Center for Tobacco Studies.

In a press release Wednesday, HHS reported that preliminary numbers from the National Youth Tobacco Survey show “a continued rise in the disturbing rates of youth e-cigarette use, especially through the use of non-tobacco flavors that appeal to kids.” More than a quarter of high school students are now using e-cigarettes in the past 30 days — up from 21 percent in 2018. The “overwhelming majority of youth e-cigarette users cited the use of popular fruit and menthol or mint flavors,” HHS stated.

Still, Delnevo and others point out that the FDA’s move to outlaw flavors could have unintended consequences.

“[It] may reduce rates of vaping among kids, and it may also have negative impact on those ex-smokers who quit smoking as they may relapse to smoking,” said Maciej Goniewicz, a leading e-cigarette researcher, also based at Roswell Park Comprehensive Cancer Center. “It looks like double-edge sword.”

David Hammond, University of Waterloo public health researcher, was more circumspect. He pointed out that it’s also possible flavors are less important for adults these days because of products like Juul, which “deliver nicotine as effectively as smoking cigarettes, that flavors may not be as necessary to switching as before.” So, “If you’re switching to vaping to avoid dying from smoking, you may not need cotton candy or mango flavor to make the switch.”

The truth is, though, the net impact of the ban will be hard to foretell. “I would expect the flavor ban to reduce e-cigarette use among youth, although magnitude is difficult to predict,” Hammond added. “It’s equally different to predict how much this move would reduce vaping among smokers.”

What the e-cigarette flavor ban leaves out

Researchers have long known menthol cigarettes are more attractive to youth and harder to quit than regular cigarettes. They’ve also been heavily marketed at — and are especially popular among — black smokers.

As combustible products, they’re more dangerous than e-cigarettes. Yet they, along with flavored cigars, have been allowed to remain on the market.

“A more systematic approach” would address both e-cigarettes and traditional combustible cigarettes, said Michael Eriksen, a former director of the Centers for Disease Control and Prevention’s Office on Smoking and Health.

What we know about the potentially explosive letter Sen. Feinstein sent to the FBI about Brett Kavan...
Facebook doubles down on removing coronavirus conspiracy theories
Report: Robert Mueller referred lobbyists, including Tony Podesta, to Manhattan prosecutors
50 million world Covid-19 cases: The biggest outbreaks, explained
Why LGBTQ rights hinge on the definition of “sex”
Netflix’s Tigertail, from Master of None co-creator Alan Yang, is a wistful story about lost time