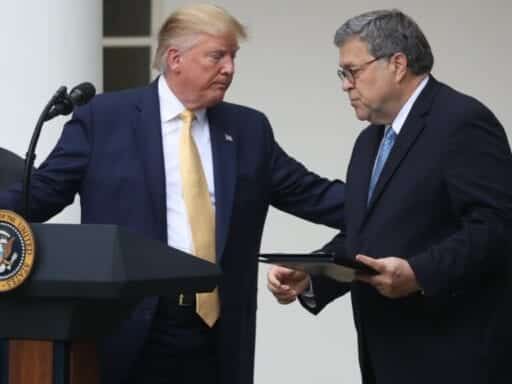 Share
Loading...
Attorney General William Barr approaches the podium at a press conference on the Census with President Donald Trump and Secretary of Commerce Wilbur Ross in the Rose Garden of the White House on July 11, 2019 in Washington, DC. | Mark Wilson/Getty Images

Trump’s Justice Department has waded into an Indiana discrimination case, opening a new front in the battle over who can ignore civil rights laws.

The Trump administration filed an unusual brief in a dispute between a gay teacher and the Catholic Church on Friday. Should the administration’s position be adopted by courts, it could expand the universe of employers who are allowed to defy laws banning discrimination in the workplace.

The Trump administration’s decision to weigh in on this case is surprising because Payne-Elliott filed his suit in an Indiana trial court — i.e. not in a federal court — and the case would have to run the full gauntlet of appeals in Indiana’s court system before it could even be considered by the Supreme Court. It’s unclear how the Justice Department even became aware of this lawsuit, although it’s possible that they were lobbied to weigh in on this case by conservative religious groups or by the Catholic Church itself.

It is also unlikely that Payne-Elliott will prevail. Twenty-two states prohibit employment discrimination based on sexual orientation, but Indiana is not one of them. So Payne-Elliott brought a weaker claim alleging that the archdiocese is “unlawfully interfering with his employment and contract with” the school. Although the Supreme Court is currently weighing whether existing federal law bans LGBTQ discrimination in the workplace, Payne-Elliott does not invoke that federal law in his suit against the archdiocese. The archdiocese, moreover, can raise a number of religious liberty defenses against this suit.

But the archdiocese raises another, potentially very consequential argument against Payne-Elliott’s suit, and the Trump administration endorses this defense in its brief. According to the Trump administration, allowing this suit to proceed would violate the archdiocese’s right to “expressive association” — a First Amendment claim that allows certain organizations to decide who they wish to associate with.

That claim is potentially quite radical, and it could lead to many employers gaining a broad new right to ignore anti-discrimination laws. Because expressive association is a constitutional claim, a Supreme Court decision expanding that doctrine could trump anti-discrimination suits brought under any federal or state statute — including the federal ban on race and sex discrimination.

Who is protected from anti-discrimination lawsuits?

A handful of Supreme Court precedents give employers with religious objections to a civil rights law some ability to ignore that law. In its 2012 decision in Hosanna-Tabor Evangelical Lutheran v. EEOC, for example, the Supreme Court recognized a “ministerial exception” that “precludes application of [anti-discrimination laws] to claims concerning the employment relationship between a religious institution and its ministers.”

The definition of who qualifies as a “minster,” moreover, goes beyond full-time clergy. Hosanna-Tabor itself involved a teacher at a church-affiliated school — though that teacher also had significant religious duties. So it is possible that Mr. Payne-Elliott also qualifies as a minister and thus cannot bring an anti-discrimination suit.

More recently, in 2018’s Masterpiece Cakeshop v. Colorado Civil Rights Commission, the Supreme Court sided with a cake baker who, for religious reasons, refused to comply with a Colorado law banning discrimination on the basis of sexual orientation.

The Court’s holding in Masterpiece was quite narrow, and was widely viewed as an effort to dispose of the case without deciding the broader question of whether people with religious objections to homosexuality have a right to defy laws banning LGBTQ discrimination. Nevertheless, the narrowness of this decision can probably be chalked up to Justice Anthony Kennedy — a relatively moderate conservative who is sympathetic to both religious liberty plaintiffs and gay rights.

With Kennedy no longer on the Court, and his seat occupied by the much more doctrinaire conservative Brett Kavanaugh, it is likely, if not entirely certain, that a majority of the Court now supports a broad exemption from LGBTQ discrimination laws for religious objectors. As a lower court judge, Kavanaugh criticized several of his colleagues for not being more sympathetic to a religious liberty case involving the Obama administration’s efforts to accommodate employers who object to contraception.

Both Hosanna-Tabor and the sort of religious liberty suits that are likely to grow out of cases like Masterpiece are limited in scope, however. That is, religious liberty protects religious liberty. Secular employers cannot invoke doctrines intended to protect people of faith to justify their own discrimination.

A third case is also relevant to Payne-Elliott’s suit against the archdiocese. In its 2000 opinion in Boy Scouts v. Dale, the Supreme Court held that the First Amendment protects a right of “expressive association,” and this right permitted the Boy Scouts to forbid gay scoutmasters. “Forcing a group to accept certain members may impair the ability of the group to express those views, and only those views, that it intends to express,” Chief Justice William Rehnquist wrote in Boy Scouts, adding that “[f]reedom of association…plainly presupposes a freedom not to associate.”

Yet the Boy Scouts opinion is also limited in scope. Rehnquist distinguished between traditional “public accommodations laws,” which ban discrimination in “places where the public is invited,” and laws that apply to “membership organizations such as the Boy Scouts.”

In private membership organizations, Rehnquist argued, “the potential for conflict between state public accommodations laws and the First Amendment rights of organizations has increased.” Thus, Rehnquist appeared to limit the scope of Boy Scouts to anti-discrimination laws that govern who can be made a member of a private organization.

Which brings us back to the Trump administration’s brief in Payne-Elliott. That brief argues for a broad right of “expressive association” that could potentially be invoked by secular employers.

Briefly, the Trump administration’s view is that an organization can claim a right to defy civil rights laws if it “engages in ‘expressive association’” and if prohibiting the group from discriminating “would significantly affect the [group’s] ability to advocate public or private viewpoints.”

Under the Trump administration’s position, moreover, courts must “give deference to an association’s assertions regarding the nature of its expression.” Thus, the mere fact that the archdiocese says that it opposes same-sex marriage, and that it feels like this message would be undermined if a Catholic school employed a teacher in such a marriage, is enough to immunize the archdiocese from suit.

Significantly, the Trump administration draws no distinction between for-profit and nonprofit employers who claim to engage in expressive association. Nor would its rule necessarily be limited to the unusual facts of Payne-Elliott, where an umbrella organization threatened to disassociate with an employer within its umbrella unless that employer fired a particular employee.

Consider Chick-fil-A, the fast food chain that emphasizes its conservative religious values — and whose CEO is on record touting his opposition to marriage equality. Under the Trump administration’s rule, Chick-fil-A could almost certainly demand that one of its franchises fire a gay employee. And it could probably also claim immunity to state anti-discrimination laws if its home office fired a direct employee for being gay.

Or consider Ollie’s Barbecue, the restaurant at the heart of a landmark 1964 civil rights case. Ollie’s, according to the Supreme Court, “refused to serve Negroes in its dining accommodations since its original opening in 1927” though it had to end that practice after Congress banned such discrimination in the Civil Rights Act of 1964.

Yet, under the Trump administration’s rule, Ollie’s could have potentially immunized itself from that law by announcing that it is a mission-driven restaurant, and that its mission is to advance white supremacy by serving barbecue in its dining room to whites only. Thus, it would violate Ollie’s right of expressive association to force it to associate with black customers.

Whatever you think of cases like Boy Scouts and Masterpiece, the courts have thus far limited those decisions to prevent them from swallowing up entire civil rights laws. The Trump administration, however, did not show the same caution in its Payne-Elliott brief.

And if the courts show a similar lack of caution when they decide this case, businesses throughout the country could gain a broad new right to discriminate.

Rep. Jim Clyburn’s endorsement gave Biden some serious momentum in South Carolina
Germany is launching a new experiment in basic income
A warning sign for the House GOP: Democratic challengers are raising more money
Why we’re reading bucket list books in quarantine
What lies beneath
Pigs are as smart as dogs. Why do we eat one and love the other?