Trump’s easing penalties on a Chinese company that sold to North Korea and Iran. Republicans are letting him do it. 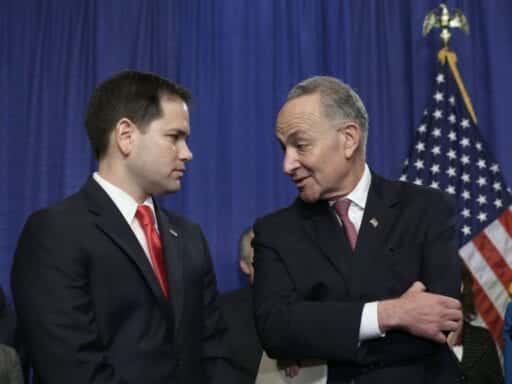 Congressional Republicans are going to let Trump ease up on ZTE after all.

Republicans are siding with President Donald Trump in easing penalties on Chinese telecom company ZTE. Negotiators in the Senate and the House of Representatives removed language from a must-pass defense bill that would have banned United States companies from selling parts or providing services to ZTE, which the Commerce Department says made illegal sales to Iran and North Korea in defiance of US sanctions.

Here’s the back story: In March 2017, the Commerce Department hit ZTE with a $1.19 billion fine for its export violations to Iran and North Korea. Then in April of this year, Commerce banned all US companies from selling to ZTE for seven years. ZTE makes inexpensive smartphones and relies on parts made in the US, meaning the maneuver was essentially a death sentence for the company.

But then in May, Trump tweeted he wants to find a way to get ZTE “back into business.” He lamented the number of Chinese jobs lost as a result of US actions.

President Xi of China, and I, are working together to give massive Chinese phone company, ZTE, a way to get back into business, fast. Too many jobs in China lost. Commerce Department has been instructed to get it done!

For a while, it looked like Congress was going to step in to stop Trump from easing up on ZTE. A bipartisan group of senators, including Marco Rubio (R-FL), Tom Cotton (R-AR), Chris Van Hollen (D-MD), and Chuck Schumer (D-NY), sponsored a measure that would have reinstated penalties on ZTE and banned US government agencies from buying devices or services from ZTE and Huawei, another Chinese telecom company. The US intelligence community has also warned that Huawei and ZTE phones pose a national security risk to the US.

The Senate voted to pass the provision as part of the National Defense Authorization Act by an 85-10 vote in June, and that version of the legislation was sent off to be reconciled with a narrower House version of the bill. And apparently, the House version won out: ZTE can’t get US government contracts, nor can Huawei, but it can still do business with private companies in the US.

Sen. David Perdue (R-GA) in June warned that the Congressional measure would “trample on the separation of powers” and hamstring Trump’s negotiation efforts with China. He released a statement on Friday after meeting with Trump about what he said was “short-sighted ZTE language” in the original Senate bill. “President Trump should not have his hands tied as he engages in major negotiations dealing with trade and the denuclearization of the Korean Peninsula,” he said.

The bill could become law by the end of this month.

Senate Minority Leader Schumer slammed the decision in the statement on Friday. “By stripping the Senate’s tough ZTE sanctions provision from the defense bill, President Trump — and the congressional Republicans who acted at his behest — have once again made President Xi and the Chinese government the big winners and the American worker and our national security the big losers,” he said.

Sen. Rubio said he was surprised his fellow lawmakers had “caved.”

Given the specific details many of my Senate colleagues know about #ZTE & how #China intends to use them against the U.S., I am surprised they caved so easily in conference.

ZTE won’t be off the hook entirely: In June, Commerce struck another deal with ZTE that required it to pay a $1-billion fine, replace its leadership, put $400 million into an escrow account, and fund US compliance monitoring for 10 years in order to do business with US suppliers. But detractors say that’s not enough.

“Despite bipartisan support to put American national security before jobs in China, the Republican leadership refused to take any real, substantive action on ZTE. Instead, they joined President Trump in bowing to Beijing,” Sen. Van Hollen said. It’s weak and shameful.”

Rubio suggested that GOP leadership’s decision to soften the language on ZTE was connected to a deal to bolster the Committee on Foreign Investment in the US, or CFIUS, a committee under the Treasury Department that reviews cross-border deals for security threats.

This deal on #CFIUS is good news. The bad news? They had to cave on #ZTE in order to get it. So chances that a #China controlled telecomm will not just stay in business, but do so here inside the U.S. sadly just went up. #BadTradeoff https://t.co/Bjew7KLaex

Game of Thrones’ showrunners won’t be directing Star Wars after all
Trump’s new favorite talking point about US coronavirus cases is highly misleading
One Night in Miami is a thoughtful study of Black celebrity, power, and justice
Amid impeachment, Trump and Giuliani are still coordinating on anti-Biden dirt
Vox Sentences: The Texas voter purge
Coronavirus has created a crisis for primary care doctors and their patients