Trump’s economic victory lap is full of embellishments and exaggerations 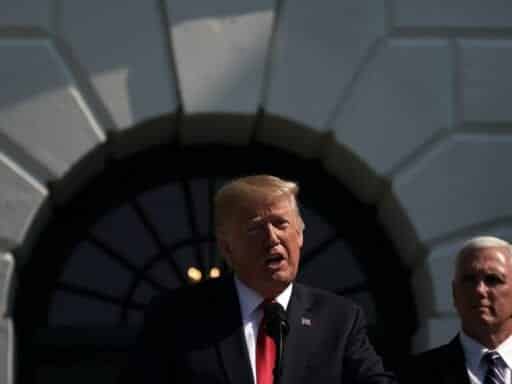 Some people (read: Donald Trump Jr.) are just straight lying about it.

The United States economy posted strong growth in the second quarter of the year. Gross domestic product grew at 4.1 percent — its best pace in about four years — and consumer spending, business investments, and exports saw a boost. The numbers are good, and still, some figures within President Donald Trump’s orbit, including the president himself, feel the need to make exaggerations about them.

Trump on Friday touted the Commerce Department’s numbers in an event on the South Lawn of the White House. “We’ve turned it all around,” he said. “Once again, we are the economic envy of the entire world.”

Larry Kudlow, the president’s top economic adviser, spoke after him. “This is a boom that will be sustainable,” he said. “Frankly, as far as the eye can see, this is not a one-shot effort.”

Trump and Kudlow were right to tout the second-quarter economic numbers — they’re really good. But Trump and others quickly evolved into exaggerations, embellishments, and making promises that perhaps can’t be kept.

Some people (read: Donald Trump Jr.) are just straight lying about it

Incredible numbers. I remember when “the experts” laughed about breaking 3%. Just because Obama never broke 2% doesn’t mean that someone with great policies can’t. Let’s keep this going. https://t.co/05LyLBw22j

GDP growth hit or surpassed 2 percent on a quarterly basis across more than a dozen quarters under President Barack Obama, and it surpassed 3 percent eight times. As the Washington Post’s Philip Bump points out, quarterly GDP growth has exceeded 5.1 percent in 37 months since Ronald Reagan took office in 1981, including four times under Obama.

Journalist John Hardwood noted on Twitter that 4.1 growth under Trump in the second quarter of this year would rank as the fifth strongest of the Obama presidency. The best quarter for Obama was in 2014, when in the second three months of the year the economy grew at 5.1 percent.

strong 4.1% growth under Trump in Q2 of 2018 would rank as 5th strongest Q of Obama presidency

Trump Jr. isn’t the only one to claim 4.1 percent growth last quarter — which, again, is very good — is exceptional. Former House Speaker Newt Gingrich called it “remarkable.” Trump on Friday said the number was “amazing.”

Vice President Mike Pence also cited the 2 percent statistic in an interview with Fox News’ Maria Bartiromo aired on Sunday. “The reality is, in the last two administrations, the economy grew by less than 2 percent,” Pence said. “And in the first 18 months of this administration — we were a little shy of 3 percent last year — we’re on track to be at 3 percent or better this year.”

Trump keeps making the bar higher for himself

Trump on the campaign trail said he would boost annual GDP growth to 3 to 4 percent, and while he’s not there yet, there are signs he could get to at least the 3 percent number. But true to Trump form, he can’t help himself from embellishing — and therefore setting a huge new benchmark.

Trump in a radio interview with Sean Hannity on Friday bragged that he could perhaps boost economic growth to 8 or 9 percent if he was able to cut the trade deficit in half. “If I cut it in half, right there we will pick up 3 or 4 points,” he said, therefore putting growth at “8 or 9” percent. (Even if he hits his promised 4 percent growth rate, adding 3 or four points adds up to 7 or 8 percent, so he’s tossing an extra point in there.)

This isn’t the first time the president has, unprompted, moved the goal line for himself on the economy. In December, he told reporters he thought he’d see a 6 percent annual growth rate.

Fox News’ Chris Wallace asked Treasury Secretary Steven Mnuchin about Trump’s new projections in an interview on Sunday, and he hedged, going back to the 3 percent number. “We’ve been very clear since the campaign, the president’s economic plan has always consisted of tax reform, trade reform, and regulatory relief, and we said we were going to achieve 3 percent or higher sustained GDP,” Mnuchin said.

Trump on Friday also took credit for adding 3.7 million jobs since the election (meaning he grabbed some Obama months as well). On that front, he’s set another high bar for himself: As NBC News notes, Trump at his inauguration said he would add 25 million jobs over the span of a decade.

President Trump on Sunday in a tweet said the “biggest and best results coming out of the good GDP report” was that the quarterly trade deficit was reduced by about $50 billion. That’s also a big reason why economists say the second quarter’s figures might not be sustainable.

(Trump also bragged about unemployment numbers, which were not in the GDP report on Friday. Those come out next week.)

The biggest and best results coming out of the good GDP report was that the quarterly Trade Deficit has been reduced by $52 Billion and, of course, the historically low unemployment numbers, especially for African Americans, Hispanics, Asians and Women.

The threat of tariffs and impending trade war caused a surge in US exports in the second quarter. China and other countries hurried to buy up products, and exporters rushed to get them out before tariffs were put in place. Soybean exports were up more than 50 percent in May from the prior year.

Ahead of the GDP report’s release, Morgan Stanley economist Ellen Zentner in an op-ed for the New York Times warned of such a scenario where growth numbers could get a temporary boost from parties trying to get ahead of the trade war, characterizing it as “doomsday prepping.”

“Global companies are stockpiling raw materials, intermediate goods, and finished goods before tariffs take effect and raise the prices of those goods,” she wrote. “Once the bite of tariffs hits demand, companies will no longer need to build inventories, and this boost to economic growth could end.”

Eric Winograd, an economist at Alliance-Bernstein, told Politico that the growth burst tied to exports will be “paid back in the next quarter.”

Kudlow in an appearance on CNN’s State of the Union on Sunday brushed aside economists’ doubts. “There’s just a lot of good things going on,” he said, latter adding, “I don’t see any reason why we can’t run this for several quarters.”

Beyond trade, there are plenty of other reasons for skepticism over the sustainability of the second quarter’s GDP growth. As mentioned, the economy has expanded at such a rate for a single quarter on multiple occasions in the past. If the Federal Reserve starts to worry the economy will overheat, it could increase the pace of interest rate hikes to slow it down.

“The second quarter was a strong quarter, but it was juice up by the tax cuts and higher government spending,” Mark Zandi, chief economist at Moody’s Analytics, warned. He’s forecast that growth will hit 3 percent in 2018, then be 2.6 percent in 2019, but fall to 0.9 percent in 2020.

Despite the skepticism, the Trump team is promising that this one-quarter 4.1 percent growth rate is something they can achieve long-term. They could be on track for a year of 3 percent growth, and perhaps it could inch higher, but even the more modest voices in the administration are trying to guarantee things they, well, can’t.

“We can only project a couple of years into the future but I think we’re well on this path for several years so I don’t think this is a one- or two-year phenomenon,” Mnuchin said on Sunday. “I think we definitely are in a period of four or five years of sustained 3 percent growth, at least.”

The 4 most important stories of the week, explained
Virginia Republicans just nominated an alt-right hero to run for Senate
Oscars 2020: the full list of nominees
How to manage anxiety during a pandemic
Clint Eastwood’s new movie Richard Jewell thwarts its truth-telling by smearing its female journalis...
4 primary races to watch in Pennsylvania