Trump’s EPA balks at a chance to save black lives 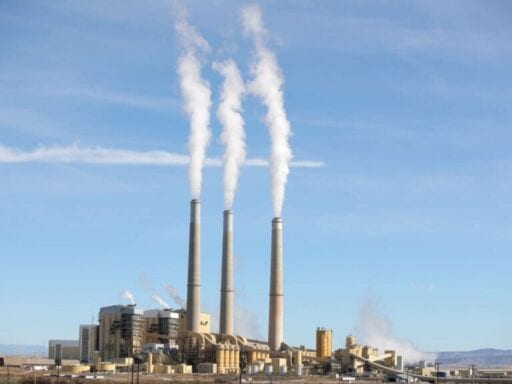 Share
Loading...
PacifiCorp’s Hunter coal fired power plant outside of Castle Dale, Utah on November 14, 2019. Coal power generation is one main source of particulate pollution in the US. | AFP via Getty Images

Soot sickens and kills people of color disproportionately. The EPA has decided to not tighten standards that would protect them and others.

Decades of research paint a clear picture: The No. 1 environmental health risk in the US is soot. Also known as particulate pollution, it is made up of extremely small particles spewed into the air by power generation, industrial processes, and cars and trucks.

Research has consistently found that inhaling these particles is incredibly harmful to human physiology, at high concentrations over short periods or low concentrations over extended periods. Particulate pollution is linked to increased asthma, especially among children, along with lung irritation and inflammation, blood clots, heart attacks, weakened immune systems, and, according to a wave of recent research, long-term cognitive impacts (reduced productivity, inability to concentrate, and dementia).

Research is equally consistent on another point: the harms of particulate pollution are not equitably distributed. They fall most heavily on vulnerable populations like children, the elderly, people with preexisting health conditions, low-income people, and, above all, people of color.

To put it more bluntly: People of color are choking on white people’s pollution.

The current regulatory limits on particulate pollution under the Clean Air Act were set in 2012, based on scientific review concluded in 2010. As subsequent science has revealed, they are inadequate to protect public health. That was the strong and unanimous conclusion of the panel of 19 scientists assembled in 2015 to assess the evidence.

Nonetheless, EPA claims the science is not settled and is refusing to tighten the standards, which will mean, on an ongoing basis, well over 10,000 unnecessary deaths in the US every year.

The purported rationale, of this and all the administration’s deregulatory efforts, is to reduce costs to industry. But the costs of pollution don’t disappear when they are removed from industry’s books. They are simply shifted onto the public ledger, in the form of health care costs and lost work days. Lax pollution standards represent an ongoing transfer of costs from industry to the public.

Lax particulate pollution standards are, in short, yet another way of devaluing black bodies and black lives, yet another expression of the structural racism that Trump has so effectively flushed to the surface.

How EPA stacked the deck to ignore the science

Particulate pollution is regulated under the Clean Air Act’s National Ambient Air Quality Standards (NAAQS) program. The Act mandates that scientists periodically review the latest evidence on air pollution and recommend updates to NAAQS standards as necessary, so that the program stays abreast of the latest science.

The EPA’s seven-member Clean Air Scientific Advisory Committee (CASAC) reviews the standards, but because it does not have depth of expertise in all the various subject matters, it typically consults with a panel of outside scientists.

When the latest review of particulate standards began in 2015, such a panel was assembled: the 19-member Particulate Matter Review Panel, made up of experts in epidemiology, physiology, and other relevant disciplines. The review was delayed in getting underway, and Trump’s EPA initially talked about moving the deadline for completion to 2022. But in early 2018, then-EPA Administrator Scott Pruitt abruptly announced that the agency would rush to be done by December 2020, the tail end of Trump’s first term.

Later in 2018, to “streamline” the review process, newly appointed EPA Administrator Andrew Wheeler unceremoniously disbanded the PM Review Panel and left the review in the hands of CASAC — which had, over the previous year, been entirely reconstituted with Trump appointees. It was chaired by an industry consultant; just one of the seven members was a scientist.

The disbanded scientific panel later reconvened and rebranded as the Independent Particulate Matter Review Panel, under the aegis of the Union of Concerned Scientists, and went on to issue the same assessments and recommendations it would have offered CASAC.

Now, the Independent PM Review Panel has penned an extraordinary piece in The New England Journal of Medicine, excoriating the EPA.

“We unequivocally and unanimously concluded that the current PM2.5 standards do not adequately protect public health,” they write. Ignoring that clear conclusion required serial abuses of the review process, as outlined in this somewhat mind-boggling paragraph:

The dismissal of our review panel is just one of numerous recent ad hoc changes to scientific review of the NAAQS since 2017 that undermine the quality, credibility, and integrity of the review process and its outcome. Other changes include imposing nonscientific criteria for appointing the Clean Air Scientific Advisory Committee members related to geographic diversity and affiliation with governments, replacing the entire membership of the chartered committee over a period of 1 year, banning nongovernmental recipients of EPA scientific research grants from committee membership while allowing membership for persons affiliated with regulated industries, ignoring statutory requirements for the need for a thorough and accurate scientific review of the NAAQS in setting a review schedule, disregarding key elements of the committee-approved Integrated Review Plan, reducing the number of drafts of a document for committee review irrespective of whether substantial revision of scientific content is needed, commingling science and policy issues, and creating an ad hoc “pool” of consultants that fails to address the deficiencies caused by dismissing the Clean Air Scientific Advisory Committee PM Review Panel.

That is … a lot. “It’s not surprising [CASAC] would retain the standards,” Gretchen Goldman, research director for the Union of Concerned Scientists, told the Washington Post, “because they broke the process.”

The chair of CASAC, Tony Cox — who has worked as a consultant for energy and chemical industry trade groups — contends that the particulate science doesn’t hold up. In the end, CASAC ignored the panel’s work and recommended that the standards be kept where they are.

The 60-day comment period on the new rule ends on June 29; there is no sign that the vast number of critical comments and submissions to EPA will change Wheeler’s mind.

Once the rule is put into effect, it will immediately face lawsuits. Given how shoddy the process has been and how clearly the results fly in the face of consensus science, it is unlikely to hold up in court. Like many of the Trump administration’s hastily executed regulatory rollbacks, it will likely end up quietly rejected — in the end, less an enduring victory than a flashy nationalist pageant that merely delays inevitable changes.

If it is rejected, it will go back to EPA for another rulemaking process that will take years. In the meantime, tens of thousands of people, disproportionately people of color, will needlessly get sick and die.

Black people are most likely to suffer the effects of soot

It is well known that the harms of pollution are inequitably distributed. Like so many social harms, they fall hardest on the most vulnerable.

That means people with weak or compromised immune systems, like children, the elderly, or people with preexisting respiratory or circulatory problems. And it also means people who happen to live close to the industrial facilities and highways that produce the pollution, typically low-income communities and communities of color. Black people fall disproportionately into both those categories, with high rates of preexisting conditions and high likelihood of living proximate to pollution sources.

This illustrates that the impact of pollution on the black population can not be reduced to geography or economic status. It “should be considered in conjunction with existing health disparities,” the study says. “Access to health care has well-documented disparities by race/ethnicity, and the prevalence of certain diseases is notably higher in non-White populations.” In other words, the pollution burden should be considered in the context of systemic racism.

These studies are consonant with a long history of research — see here, here, here, and here — showing that air pollution reflects and reproduces wider income and racial disparities. The poor suffer; minorities suffer; black people suffer most of all.

Inequitable distribution of pollution is as old as industrial society. The Clean Air Act was meant, in part, to address that injustice, to secure healthy air for every American. And despite its flaws and failings, it has been, among other things, one of the most effective environmental justice policies in US history. Just as pollution hurts people of color most, reducing it helps them most.

Emission of the six big pollutants — particles, ozone, lead, carbon monoxide, nitrogen dioxide, and sulfur dioxide — declined an average of 73 percent between 1970 and 2017. Fine particle concentrations fell by 43 percent between 2000 and 2019.

The Clean Air Act has accomplished this much because it is not a static law but a living, evolving set of policy tools. It has scientific reviews built in every few years, so that the level of public protection keeps up with the latest evidence. Scholars call this “green drift,” as the landmark environmental laws of the 1970s continue updating, even in the face of some hostile administrations.

Trump’s is the most hostile yet, working overtime to gum up the Clean Air Act and blunt its effectiveness. It goes beyond weakened standards for particulates, mercury, methane, and fuel economy.

There’s the “Transparency in Regulatory Science” (or “secret science”) rule, which would prohibit EPA from considering a broad swathe of the epidemiological research that supports particulate rules. There’s the effort to alter EPA cost-benefit analysis to exclude consideration of “cobenefits.” Many rules reducing other pollutants — mercury and CO2, for example — are justified in part by the fact that they also reduce particulates, which substantially adds to their health benefits. Excluding cobenefits is a way to justify weakening a whole range of other air-quality standards.

EPA is doing as much as it can to dismantle, weaken, or delay Clean Air Act protections before the end of Trump’s first term. The typical framing of these moves is that Trump is doing them on behalf of industry and that they are hurting “the environment,” or, worse, “the planet” (ugh).

There’s another way to frame them: They are expressions of structural racism, America’s long history of exploiting people of color for their labor while rewarding them with deprivation, marginalization, and ill health. Just as black people are often denied police protection while subjected to police violence, they are often denied the wealth and consumption that produce pollution while subjected to the health ravages of inhaling it.

Science-based air quality standards are one way to ease the burdens imposed on black bodies. The Trump administration’s staunch opposition to those standards, its attempts to undermine the bureaucratic machinery that produces them, is just one more expression of its disregard for black lives.

Rep. Jim Jordan is attacking CNN for reaching out to his ex-staffers
A guide to Steve McQueen’s Small Axe, the greatest film series you’ll see this year
Why economic hardships finally sparked Iranian protests
Trump is rescuing Maine lobstermen from himself, and blaming Obama
Trump ignored CNN to take a Fox News question. Fox went along with it.
Succession comes up with an episode where absolutely everybody loses