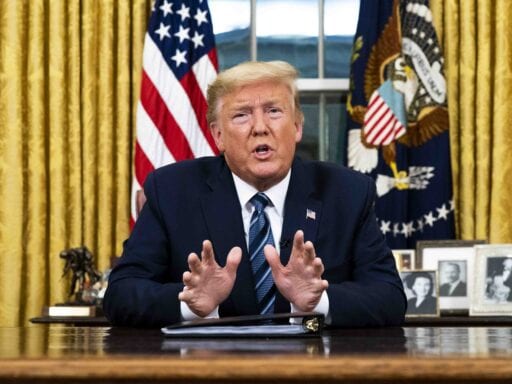 President Donald Trump announced a sweeping ban on travelers coming to the US from Europe as part of the administration’s plan to combat the coronavirus — a move that experts say distracts from the reality that the virus is already spreading among people within the United States.

In a primetime address from the Oval Office Wednesday night, Trump said that the United States will be suspending all travel from Europe to the United States for the next 30 days, though the United Kingdom will be exempted. The order will go into effect Friday at midnight. Trump also noted that “[t]here will be exemptions for Americans who have undergone appropriate screenings.”

Trump described the measure as a way “to keep new cases from entering our shores.”

The problem, experts say, is that the virus has already entered America’s shores, and we’re already seeing “community spreading” of the virus — that is, people with no international travel and no links to known cases are now getting the virus, implying they were exposed locally by an unknown source.

Altogether, this was an extraordinary move, but one that may do little to stop or mitigate the spread of coronavirus — while potentially damaging the US’s already somewhat strained relationship with its European allies.

“Germs don’t respect borders, and you can’t wall off every place in the world,” Lawrence Gostin, director of the O’Neill Institute for National and Global Health Law at Georgetown University Law School, told me.

“There’s a fine line between the president’s pro-US, anti-internationalist position where he thinks that he can restrict his borders on things like trade or immigration,” he added. “That doesn’t work with a germ — particularly with a germ that’s already here.”

What we know about Trump’s travel ban

In his speech, Trump said that cargo and other trade would also be subject to the ban, immediately sparking fears of further disruptions to the economy — but it turns out Trump seems to have misspoken, as the White House later clarified that the bin did not apply to goods, just people. A sign, perhaps, of how slipshod the rollout of this order was.

The Department of Homeland Security further clarified that the ban will apply to all foreign nationals who have physically been in Europe 14 days before they enter, or try to enter, the United States. It encompasses the 26 countries in the European Union’s “Schengen Area,” a grouping of countries in the Europe that allow their citizens to travel freely across national borders, which includes France, Germany, Spain, and Italy.

The order excludes non-Schengen EU countries, like Ireland, and the UK, which is no longer in the EU but is still abiding by all its rules.

The order does not apply to legal permanent US residents, according to DHS. The US can’t bar US citizens from returning, either, though it likely can set up screening or quarantine measures, if necessary.

The White House, in its proclamation, described the Schengen countries as having the most cases — more than 17,000 — of the novel coronavirus outside of mainland China. That’s true, although those cases are spread across 26 countries, with some, like Italy facing more acute outbreaks.

But other EU countries have much milder outbreaks so far. The UK — which, again, is excluded from the ban — has more than 450 coronavirus cases.

Acting DHS Secretary Chad Wolf justified the travel ban by saying the administration had issued similar travel restrictions on those who had been to China and Iran. That “proved to be effective in slowing the spread of the virus to the U.S., while public health officials prepared,” he said in a statement.

The problem, of course, is that coronavirus is already here.

A travel ban might miss the point, at this point

As of March 11, there are more than 1,300 cases in the United States. This number is expected to go up, but some experts say problems with testing have likely delayed a full accounting of the number of infected.

As state and local governments take measures to mitigate community spread — banning large events and encouraging “social distancing” — it’s not all that clear that expending resources on such dramatic travel restrictions will effectively tamp down the outbreak within the US at this point.

Public health officials in the US are largely discouraging travel, especially for older people and those with underlying conditions who are at higher risk of both contracting and experiencing severe consequences from the coronavirus. The State Department is also asking US citizens to “reconsider” travel abroad because of the coronavirus pandemic.

Screening of travelers may help prevent people from bringing the virus into new communities in the US, but the World Health Organization discourages using “unnecessary” travel restrictions as a tool to stop the spread of a virus, because it can only delay, but not truly block, the spread of an epidemic.

“It’s not going to do anything to mitigate the spread here, so it makes [Trump] look silly and incompetent at a time when he needs to look well briefed and presidential,” Jim Goldgeier, Robert Bosch Senior Visiting Fellow at the Brookings Institute, told Vox.

Trump announced the ban late Wednesday evening, which is the middle of the night for much of Europe, so reactions from the continent so far have been a bit muted. It’s also unclear how much notice the US gave to its European partners about the administration’s order.

As Georgetown Law’s Gostin said, germs don’t respect borders. And at a time when international cooperation, and coordination, is as necessary as ever, Trump’s travel order may create more tension and distract from the real crisis that’s already here in the United States.