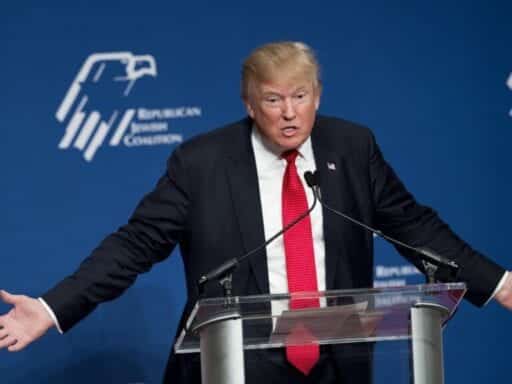 No, Trump isn’t reclassifying Judaism as a nationality. Here’s what he’s doing instead.

When the New York Times reported Tuesday afternoon that Trump was about to issue an executive order designed to crack down on anti-Semitic hate speech on college campuses, it sparked an immediate and understandable panic among liberals online.

The order, which the Times did not quote or post, would in their description “effectively interpret Judaism as a race or nationality, not just a religion.” Commentators on Twitter extrapolated a disturbing similarity to Nazi-era laws on the status of Jews, and warned that the Trump administration would use this order to crack down on on pro-Palestinian speech at American universities.

But a draft of the executive order — published Wednesday morning by the news site Jewish Insider — is far less troubling than the Times made it out to be. The executive order has still not been officially issued, but according to the draft text, it does not redefine Judaism as a nationality. Instead, it appears to largely be a reiteration of 2010 guidance issued by the Obama administration aimed at providing a more expansive definition of anti-Semitism.

The executive order instructs federal officials to “consider” a definition of anti-Semitism that, if taken literally, could still be used to punish universities for playing host to pro-Palestinian speakers, even though the order, according to the draft text, also contains explicit guidance to avoid violating First Amendment rights.

“The text of the EO is really a nothingburger that doesn’t change the law in any way,” writes Sam Bagenstos, a University of Michigan Law professor who worked on these issues in President Obama’s Justice Department. “The key question will be how it is applied in practice.”

The draft text suggests concerns about treating Jews as non-Americans were overblown. But is also is a sign that the Trump administration might be willing to expand ongoing efforts to attack the speech rights of Palestinian campuses on campus, an extension of an illiberal trend in organized pro-Israel advocacy that should trouble all of us.

What the executive order actually does

The specific mechanism at issue here is Title VI of the Civil Rights Act of 1964, which prohibits discrimination “on the ground of race, color, or national origin” by “any program or activity receiving Federal financial assistance.” Since federal grants and loans underpin most of higher education in the US, Title VI applies to virtually all colleges and universities with only a few exceptions.

Significantly, Title VI does not explicitly prevent discrimination on the basis of religion. In some circumstances, however, discrimination that targets members of a particular faith has been interpreted as national origin discrimination under Title VI, meaning that colleges are required to address it or risk losing federal funding as a result. The Department of Education issued guidance in 2010 that explains how this works.

“A school also has responsibilities under Title VI,” the Obama era guidance explains, “when its students are harassed based on their actual or perceived citizenship or residency in a country whose residents share a dominant religion or a distinct religious identity.”

Suppose that a group of bullies falsely believe that all Jews are also Israeli. If those bullies harass a group of Jewish students because the bullies are bigoted against people from Israel, that is a form of national origin discrimination — even if the targets of this bullying are not Israeli citizens.

The executive order, in other words, does not engage in Nazi reclassification of Judaism as something other than a religion. Rather, it rests on a benign and fairly obvious proposition about how discrimination against Jews often functions: Suppose that an Israeli student is targeted by school administrators because those administrators are biased against people from Israel. If this student is also Jewish, the fact that the student is a Jew does not mean that they were not a victim of national origin discrimination.

It’s quite common for anti-Semites to use the term “Zionist” as a derogatory term for Jews at a whole or to allege that Jewish Americans are Israeli plants who are fundamentally disloyal to the United States. The Obama-Trump interpretation of Title VI helps protect Jews from discrimination phrased in this language, and in that sense actually has something to offer our understanding of federal civil rights law.

The real issue with the order is not what it does, but what it signals

This doesn’t mean, though, that the executive order is without its problems.

Section 2 of the executive order instructs executive agencies to “consider” the definition of anti-Semitism put together by the International Holocaust Remembrance Agency (IHRA) when considering if a specific incident of anti-Semitism that violate Title VI.

This definition came about from a European data collection effort aiming to quantify the number of anti-Semitic incidents on the continent. It is intentionally broad and was not designed to be a list of acts that regulators might outlaw or punish.

As a result, it includes examples of “anti-Semitism” that are offensive to many Jews but still protected under the First Amendment — particularly ones that blur the line between anti-Semitic and anti-Israel speech. For example, the IHRA lists “claiming that the existence of a State of Israel is a racist endeavor” as an example of anti-Semitism. It’s certainly possible to think of instances where this claim can be deployed in an anti-Semitic way, but it’s also a claim commonly heard by pro-Palestinian advocates in debates on the conflict.

Rigorously applying the IHRA standard to Title VI enforcement could, then, result in reclassifying campus advocacy for the Palestinians as anti-Semitism — forcing universities to either crack down on student free speech or risk losing a whole lot of federal funding.

This isn’t just our opinion; Kenneth Stern, the lead author of the IHRA definition, wrote that it should not be applied to higher education for this reason in a 2016 New York Times op-ed:

The definition was intended for data collectors writing reports about anti-Semitism in Europe. It was never supposed to curtail speech on campus…It is easy to imagine calls for university administrators to stop pro-Palestinian speech. Even if lawsuits alleging Title VI violations fail, students and faculty members will be scared into silence, and administrators will err on the side of suppressing or censuring speech. In a political environment in which all good is seen on one side and all bad on the other, a law that punishes political speech stirs more hatred.

The executive order does not guarantee that Stern’s nightmare will come to pass. It emphasizes that it’s a “non-legally binding working definition,” and goes out of its way to say “agencies shall not diminish or infringe upon any right protected under Federal law or under the First Amendment” in applying IHRA’s definition to Title VI. It might not end up changing anything.

But it could. As Acadia University’s Jeffrey Sachs notes, the Trump Department of Education has already launched several investigations into pro-Palestinian campus speech under the auspices of Title VI. It’s possible this could escalate after the executive order.

“In the last year alone, the Department of Education has launched investigations into alleged anti-Semitism at Rutgers University, Duke University, the University of North Carolina, and Williams College,” Sachs wrote in September. “If found to have enabled anti-Semitism on campus, these universities could forfeit millions of dollars in federal funding. Yet, in each case, the ‘anti-Semitic’ speech being investigated is criticism of Israel.”

But the fact that these cases are already happening shows that the executive order itself isn’t the real issue here. The regulatory changes are pretty minimal.

The concern instead is a broader movement from pro-Israel advocates to stigmatize and criminalize their opponents, one that ranges from monitoring groups like the Canary Mission to state and federal legislation aimed at destroying the Boycott, Divestment, and Sanctions (BDS) movement. The Trump administration, which has embraced a hardline position on Israel, appears to be similarly embracing pro-Israel advocates’ maximalist demands on using the law as a tool to suppress pro-Palestinian speech.

The executive order’s general toothlessness, then, is not a reason to give up all concern. Instead, it’s a useful way to draw attention to an oft-ignored threat to free speech on campus: the Republican Party’s increasing alignment with Israel’s most aggressive right-wing defenders.

Millions of Americans are about to lose emergency paid leave during the pandemic
Trump’s fear-stoking immigration policy, in two White House retweets
Why Hannah Gadsby’s searing comedy special Nanette has upended comedy for good
Jim Jordan is accused of turning a blind eye to sexual abuse. Now he’s attacking the accusers.
Trump’s favorite talking point about the whistleblower has been refuted by his own White House
Hillary Clinton’s defense of Bill Clinton is why women don’t come forward