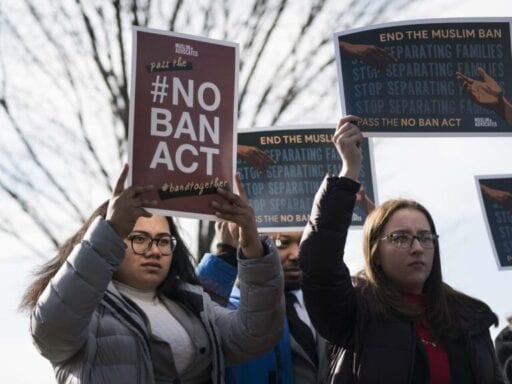 Citizens of Myanmar, Eritrea, Kyrgyzstan, Nigeria, Sudan, and Tanzania can still visit the US, but most won’t be able to settle here permanently.

The Trump administration’s new restrictions on immigrants from Myanmar, Eritrea, Kyrgyzstan, Nigeria, Sudan, and Tanzania went into effect on Friday in an expansion of its controversial travel ban policy.

The new restrictions, detailed in a proclamation President Trump signed last month, aren’t as severe as those for other countries covered by the preexisting travel ban: They will still allow people from the newly listed countries to travel to the US temporarily.

Starting Friday, immigrants from Kyrgyzstan, Myanmar, Eritrea, and Nigeria can no longer obtain visas allowing them to immigrate to the US permanently. But they will be able to come to the US on temporary visas, such as those for foreign workers, tourists, and students.

The proclamation also bars citizens of those countries, as well as Sudan and Tanzania, from participating in the diversity visa lottery under which 55,000 citizens of countries with low levels of immigration can come to the US annually. Refugees and existing visas holders will not be affected.

The decision to expand the travel ban, which has long been underway, came as Trump started to ramp up his reelection campaign, invoking his restrictionist immigration policies as a means of appealing to his base.

The expansion of the ban will likely hit Nigeria, the largest African country by population, the hardest. In 2018, the US granted Nigerians almost 14,000 green cards. Citizens from other countries on the list, by comparison, were granted a combined total of fewer than 6,000 green cards.

The Supreme Court affirmed that Trump has broad authority to restrict immigration where national security demands it. But it’s not clear whether any of these countries pose a direct threat to the US, since many are dealing with various forms of domestic conflict, including homegrown terrorism.

Expanding the travel ban will cut down on people immigrating from the affected countries to join their family members in the US. Although it doesn’t affect student visas, it could also discourage students from coming to the US for their studies, since they might not have the option to remain in the country permanently. Almost 13,000 Nigerian students came to the US last year.

The consequences of an expanded ban might have serious repercussions globally, too: It could reverse recent, albeit tenuous, strides in diplomatic relations with the affected countries. Advocates are criticizing it as an “African ban,” arguing that a president who ranted about immigrants from “shithole countries” is now enacting policies to unfairly limit their ability to come to the US.

How the new ban works

The version of the ban that was already in place, the third Trump has issued, placed restrictions on citizens of Iran, Libya, Somalia, Syria, Yemen, Venezuela, and North Korea who seek to enter the US. Citizens of those countries are barred from obtaining any kind of visas, largely preventing them from entering the US. (Chad was taken off the list of countries subject to the ban last April after it met the Trump administration’s demands to share information with US authorities that could aid in efforts to vet foreigners.)

The administration has now expanded the ban to also place restrictions on immigrants from six additional nations: Myanmar, Eritrea, Kyrgyzstan, Nigeria, Sudan, and Tanzania. Citizens of the new countries can still visit the US, but for the most part, won’t be able to settle in the US permanently.

The administration has argued that all of these countries pose threats to US national security based on the findings of multiple government agencies. But the agencies’ findings have never been made public — meaning the nature of those threats remains unclear — and dozens of former intelligence officials have argued that the ban does nothing to improve US national security.

But the administration has broadly cited terrorist activity, a failure of the countries to properly document their own travelers, and insufficient efforts to cooperate and share information with US authorities as justification for the ban.

The ban is mostly enforced abroad at US consulates and embassies that are denying visas to those affected and preventing them from getting on a plane in the first place.

People with existing visas or green cards, dual US citizens, and refugees seeking to come to the US are not affected. (However, during his time in office Trump has separately slashed the overall number of refugees who can resettle in the US annually, from 110,000 to 18,000.)

Beyond that, the restrictions on travel differ by country. Citizens of every country covered by the ban can’t obtain diversity visas and all but those from Tanzania and Sudan can’t get visas that allow them to immigrate to the US permanently.

Syrians and North Koreans cannot enter the US at all, though the number of travelers coming from North Korea is negligible. Iranians can’t obtain visas unless they’re students, but since students have no chance of remaining in the US after graduation, fewer of them have decided to come. Somalians can still obtain temporary visas, including student visas and H-1B skilled worker visas.

Those from Yemen and Libya, as well as certain Venezuelan government officials and their families, can’t obtain temporary visas as athletes, business visitors, tourists, or those seeking medical treatment in the US.

Citizens of any one of the countries can qualify for a waiver that would grant them entry to the US if, for example, they need urgent medical care or are trying to reunite with their immediate family in the US, but those waivers are exceedingly difficult to obtain.

The restrictions have so far hit Iran, Libya, Somalia, Syria, and Yemen the hardest: The number of visas granted to citizens of those countries fell by 80 percent from 2016 to 2018.

The decision to add African countries — Eritrea, Nigeria, Sudan, and Tanzania — to the ban didn’t come as a surprise to immigrants’ advocates. The president has a history of seeking to discriminate against African immigrants, they said.

He has sought to keep out Africans from what he called “shithole countries” while suggesting that the US should accept more immigrants from predominantly white nations like Norway. And he’s repeatedly sought to dismantle the diversity visa lottery — for many Africans, the only way that they can immigrate to the US.

Advocates are calling the expanded ban an “African ban” — much like they had called the first version of the ban, unveiled in January 2017, a “Muslim ban” since it initially targeted Muslim-majority countries.

“When one considers the nature of the first travel ban — the Muslim ban — and the president’s comments about African countries, it’s hard not to come away with the conclusion that these bans are discriminatory,” Rep. Joe Neguse, the son of Eritrean immigrants, told reporters last month.

The White House, meanwhile, has portrayed the ban as merely a matter of national security.

“It is fundamental to national security, and the height of common sense, that if a foreign nation wishes to receive the benefits of immigration and travel to the United States, it must satisfy basic security conditions outlined by America’s law-enforcement and intelligence professionals,” White House Press Secretary Stephanie Grisham said in a statement.

What we know about the affected countries

The expansion of the ban will affect tens of thousands of foreigners who apply for green cards in the US every year.

Many of the affected countries have committed human rights violations and are ridden with conflict, sometimes in the form of terrorist activity. Some have recently increased their cooperation with the US and Europe, but a senior administration official said that their security standards still fall short of the Trump administration’s baseline.

Nigeria has partnered with the US in counterterrorism operations against Boko Haram, one of Africa’s largest Islamic militant groups, which has killed almost 38,000 people since 2011 and displaced another 2.5 million. A large Nigerian diaspora has since settled in the US. But Toyin Falola, a Nigerian historian and professor at the University of Texas at Austin, said that few migrants from northern Nigeria, Boko Haram’s stronghold, come to the US.

The decision to include Kyrgyzstan, which is about 85 percent Muslim, came as a surprise to some experts, given that the ex-Soviet nation has made efforts to distance itself from Russia, reaching a new cooperative agreement last year to bring it closer to the EU. But human rights abuses, including crackdowns on the press and political figures, nevertheless remain a problem.

US relations with Sudan have also improved as of late, with State Department officials suggesting in November that it would be removed from a list of state sponsors of terrorism. A civilian government has replaced former Sudanese President Omar al-Bashir’s Islamist government, which was accused of sponsoring attacks on civilians and forcibly displacing millions as part of its attempts to stamp out rebel forces.

The State Department, however, has voiced concerns about Tanzania’s “shrinking democratic space,” as its repression of the media, human rights advocates, and political opposition has ramped up since 2015.

The US currently accepts relatively high numbers of refugees from several of the countries now subject to the ban.

Of the 30,000 refugees who resettled in the US from October 2018 to October 2019, 4,932 came from Myanmar, which has engaged in a large-scale ethnic cleansing campaign against Rohingya Muslims since 2017, forcing more than 671,000 to flee to Bangladesh. The US also accepted 1,757 citizens from Eritrea, where a decades-long totalitarian regime has driven out about 480,000 people. Refugee admissions aren’t expected to stop under the new ban.

Jackson said that while the nations subject to the ban are fighting internal conflict, placing restrictions on immigration isn’t an effective way to protect national security.

“I know that the way to end terrorism or to even suggest to protect the security of this nation is not to create other anxieties and anger,” she said.