Trump’s expert urged caution about a coronavirus treatment. Trump hyped it up anyway. 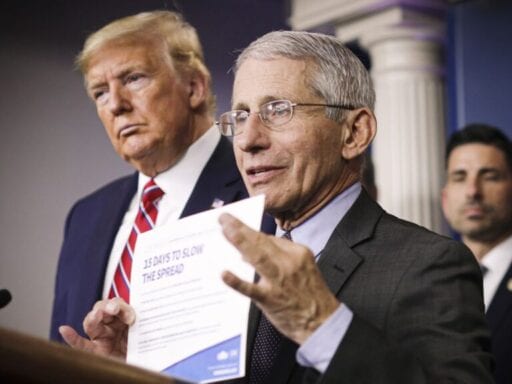 The coronavirus pandemic requires clear leadership. We are not getting that.

The latest example, from Friday’s coronavirus press briefing, began when reporters asked about chloroquine — a drug typically used for malaria that Trump on Thursday hyped as a potential treatment for Covid-19, the disease caused by the virus.

As it stands, there are no major clinical trials proving the effectiveness of choloroquine for Covid-19, but there’s some anecdotal and weaker evidence that possibly supports it.

Anthony Fauci, the head of the National Institute of Allergy and Infectious Diseases, first cautioned that the evidence that chloroquine will work for Covid-19 is thin:

The evidence you are talking about is anecdotal evidence. … We’re trying to strike a balance between making something with a potential of an effect to the American people available. At the same time, we do it under the auspices of a protocol that would give us the information to determine if it’s truly safe and effective. But the information that you are referring to specifically is anecdotal — it was not done in a controlled clinical trial — so you really can’t make any definitive statement about it.

Then, Trump grabbed the podium and seemed to contradict what Fauci said about chloroquine: “I’m probably more of a fan of that — maybe than anybody. But I’m a big fan, and we’ll see what happens. We all understand what the doctor [Fauci] said is 100 percent correct: It’s early. But I have seen things that are impressive. We’ll see. We’re gonna know soon.”

As reporters further questioned him, Trump stood his ground. He pointed out that the drug has been effective for malaria. Upon the suggestion there’s no “magic drug” for Covid-19, he responded, “I disagree. Maybe and maybe not.” Trump insisted he agreed with Fauci, but he also went on, “I feel good about it. That’s all it is: Just a feeling. I’m a smart guy.” Trump later added, “I’ve been right a lot. Let’s see what happens.”

Trump also lashed out at NBC News reporter Peter Alexander for his questions, calling him “a terrible reporter” and complaining about “fake news” after Alexander cited the death toll from Covid-19, which is now at more than 200 in the US. (Trump didn’t similarly lash out at Fox News reporter John Roberts, who actually started the line of questioning.)

After, Fauci took to the podium to give a more level-headed assessment, while trying to assure Trump he’s not disagreeing with him much — a common move in the Trump era for public health experts and other administration officials trying to avoid the president’s ire.

“There really isn’t that much of a difference in many respects with what we’re saying. The president feels optimistic about something — his feeling about it,” Fauci said. “What I’m saying is that it might be effective — I’m not saying that it isn’t. It might be effective. But as a scientist, as we’re getting it out there, we need to do it in a way that while we are making it available for people who might want the hope that it might work, you’re also collecting data that will ultimately show that it is truly effective and safe under the conditions of Covid-19.”

Previously, Trump suggested that chloroquine was safe, because it had been used for decades for malaria with few problems. But Fauci offered a bit of a rebuke, adding, “What we don’t know is when you put it in the context of another disease whether it’s safe.”

“I think it probably is gonna be safe,” Fauci added. “But I like to prove things first.”

The exchange was bizarre: Trump was all but debating one of his public health experts about a public health issue — one in which, obviously, the expert has a lot more expertise. Yet Trump contradicted Fauci anyway, muddling his own administration’s messaging and sending unclear signals to the general public during a national crisis.

The moment exposed the conflict Trump faces at these press briefings: What Americans need is factual, actionable information about what they can do to combat the pandemic. But Trump’s instinct is to downplay the outbreak — it’s what he did for months, prior to this week — and to assure people that he has everything under control. So he puts a positive spin on a drug that doesn’t have much evidence behind it for Covid-19, and his own expert has to step in and gently correct him.

This kind of situation has played out again and again as the coronavirus pandemic has worsened. Fauci alone has corrected Trump on whether the outbreak will get worse, how long a vaccine will take to make, whether testing is widely available, and how long social distancing guidelines will remain in effect, among other examples.

During a public health crisis, this kind of misinformation isn’t just unhelpful, it’s dangerous. As historian John Barry told Vox, the government’s misinformation and lies during the 1918 flu pandemic likely caused more deaths and suffering: “It was a disaster. People lost faith in everything — in their government, in what they were being told, in each other. It just isolated people even further. If trust collapses, then it becomes everyone for themselves, and that’s the worst instinct in a crisis of this scale.”

It’s during these kinds of times, experts say, that people need leaders to provide clear guidance. “You really need very strong leadership from the top,” Céline Gounder, an epidemiologist at New York University, previously told me.

Trump has not done that. Besides an uncharacteristically competent press conference on Monday, he has downplayed the risks of Covid-19 — comparing it to the common flu, which isn’t as dangerous as the novel coronavirus, and suggested that “one day it’s like a miracle, it will disappear.” At one point, he called concerns about the virus a “hoax.”

Public health experts have been highly critical of Trump’s messaging. Ashish Jha, director of the Harvard Global Health Institute, previously called it “deeply disturbing,” adding that it’s “left the country far less prepared than it needs to be for what is a very substantial challenge ahead.”

While Trump has started to take the threat of coronavirus more seriously in his public remarks since Monday, he’s used racist, xenophobic language to describe the virus. That continued on Friday as well.

The result is Americans are less likely to understand what is going on, what the government is doing to help them, and what is expected of all of us to help combat the crisis. It makes a bad situation even worse.

Antarctica just set a record high temperature of 64.9 degrees
The House has voted to allow remote voting for the first time in its history
Ivanka Trump’s interview on Face the Nation could have aired on Fox News
Sen. Richard Burr and the coronavirus insider trading scandal, explained
“Law and order” politics often undermines the rule of law
The mask shortage is forcing health workers to disregard basic coronavirus infection control