Trump’s fake tax cuts are back 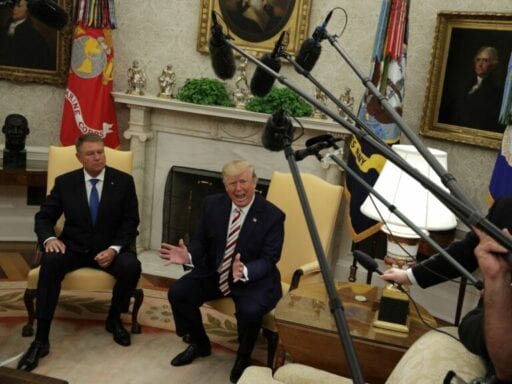 The president says more tax cuts are on the table. You might want to be skeptical of that one.

President Trump says he’s considering more tax cuts. You should be skeptical of that.

Amid growing concerns about a rocky economy and the White House’s attempts to downplay them, Trump has, yet again, rolled out the idea that a new round of tax reductions might be on the horizon. While speaking with reporters on Tuesday, the president said his administration is “always looking at the capital gains tax [and] payroll tax” cuts as options on the table.

“Payroll tax is something that we think about and a lot of people would like to see that,” he said.

The remarks came as somewhat of a surprise, because the day before, White House aides had denied a Washington Post report that the White House was kicking around the idea of a payroll tax cut. But this isn’t the first time Trump has contradicted his own White House. And this proposal isn’t exactly new territory for Trump — he’s floated the idea of another round of tax cuts before, seemingly when politically convenient, only for them to just … disappear.

Ahead of the 2018 midterm elections, Trump started talking about a 10 percent tax cut seemingly out of nowhere. He said that the White House and congressional leaders were “studying very deeply, round the clock,” on something, and that it would be passed before the midterms — even though there was no discernible plan in the works, his aides reportedly had no idea what was going on, and Congress was in recess. But that didn’t stop the president — he kept talking about the cuts, though he said, conveniently, that they would have to happen after the elections.

The midterms came and went, and so did the tax cuts. When asked about them in December, Treasury Secretary Steve Mnuchin said he didn’t want to comment on whether or not they were ever a “real thing.”

A seemingly similar scenario is playing out now: Politico reported on Wednesday that the leaders on Capitol Hill they asked about it said the payroll tax cut wasn’t a serious proposal and “no one has any information on it.”

Acknowledging this is likely not real, here’s how what Trump is talking about would work

Though it’s likely we’re not going to see either of the ideas Trump mentioned anytime soon, here’s a rundown of how they would work.

The idea behind reducing the payroll tax is that it puts more money in people’s pockets, which they then spend, boosting the economy.

As the Washington Post points out, a payroll tax cut could add up to a bigger tax break than the tax cut bill Trump signed at the end of 2017, which cut taxes for most Americans but overwhelmingly benefited corporations and the wealthy. That was supposed to boost the economy, too, but it turns out rich people and big companies weren’t as eager to spend their newfound money as the White House had hoped. Economists told USA Today that the 2011 payroll tax cut added about 0.5 percent to annual gross domestic product growth, but this time around, it would probably be somewhat less, say a 0.3 percent boost.

Payroll tax cuts increase the deficit, which is on track to reach $1 trillion next year, and that’s also money that’s not going toward funding Social Security, so the federal government might have to find other revenue to put toward it for a while.

On the capital gains indexing front, that would work a little differently — and it would, like the 2017 tax bill, generally be better for rich people. In 2018, the New York Times reported that the Trump administration was considering this one as well.

A capital gains tax is imposed when an investor sells an asset, such as a stock. In the United States, the capital gains tax rate is usually 20 percent, plus a 3.8 percent tax on net investment income to fund Obamacare. Typically, whenever that asset is sold, the tax is calculated on the original buying price and the current selling price. What indexing would mean is that calculation would start to take into account inflation. The Times last year explained how what the White House was then considering — and, per Trump, is again now — would work:

It would amount to about a $100 billion tax cut, and it would mainly go to the wealthy. As Tax Foundation economist Kyle Pomerleau noted, it probably wouldn’t do much for the economy.

3. It cuts taxes on savers, which means that it may not necessarily contribute to any new investment in the United States.
4. It is certainly not a demand-side tax cut- the vast majority goes to high-income taxpayers.

This is all probably fake anyway

Might Trump try to change capital gains or payroll taxes? Sure, maybe. But don’t hold your breath.

A payroll tax cut would definitely require action in Congress — meaning Trump would need to get House Speaker Nancy Pelosi and House Democrats on board. The White House could try to bypass Congress on capital gains indexing, but it would be a legally tenuous move. And, again, it seems like this isn’t something that’s being worked out on Capitol Hill at the moment.

But more broadly, Trump frequently doesn’t tell the truth, including on taxes. We saw him run a very similar play ahead of the midterms. And even before that, in the summer of 2018, Trump said he wanted to cut the corporate tax rate further as part of a phase two tax bill that would “be more aimed at the middle class.”

(To be fair, Trump’s comments on Tuesday were prompted by a question from a reporter about whether either tax measure was under consideration, and the president is a suggestible guy. But he could have said no.)

Trump isn’t alone in this. Also ahead of the midterms last year, House Republicans rolled out “Tax Reform 2.0,” another round of tax proposals. The hope, it seems, was that voters who weren’t in love with the 2017 bill in the first place would be into another round of tax legislation — and perhaps then vote for the GOP. That’s not how that one worked out.

And so here we are, with the economy looking a little shaky and some experts warning that a recession might be on the horizon. (That’s not guaranteed, though, so don’t panic.) And we’ve got a president who’s promising tax cuts again, which, if they’re anything like the last few times he’s done this, aren’t real.

US airlines are waiving fees and canceling domestic flights as coronavirus spreads
The Trump administration’s threat against safe injection sites is working
How Covid-19 can be more and less deadly than we knew
Shopping has become a political act. Here’s how it happened.
Deputy Attorney General Rod Rosenstein’s future in question
Joe Biden didn’t claim victory on Friday — but he urged Americans to be patient