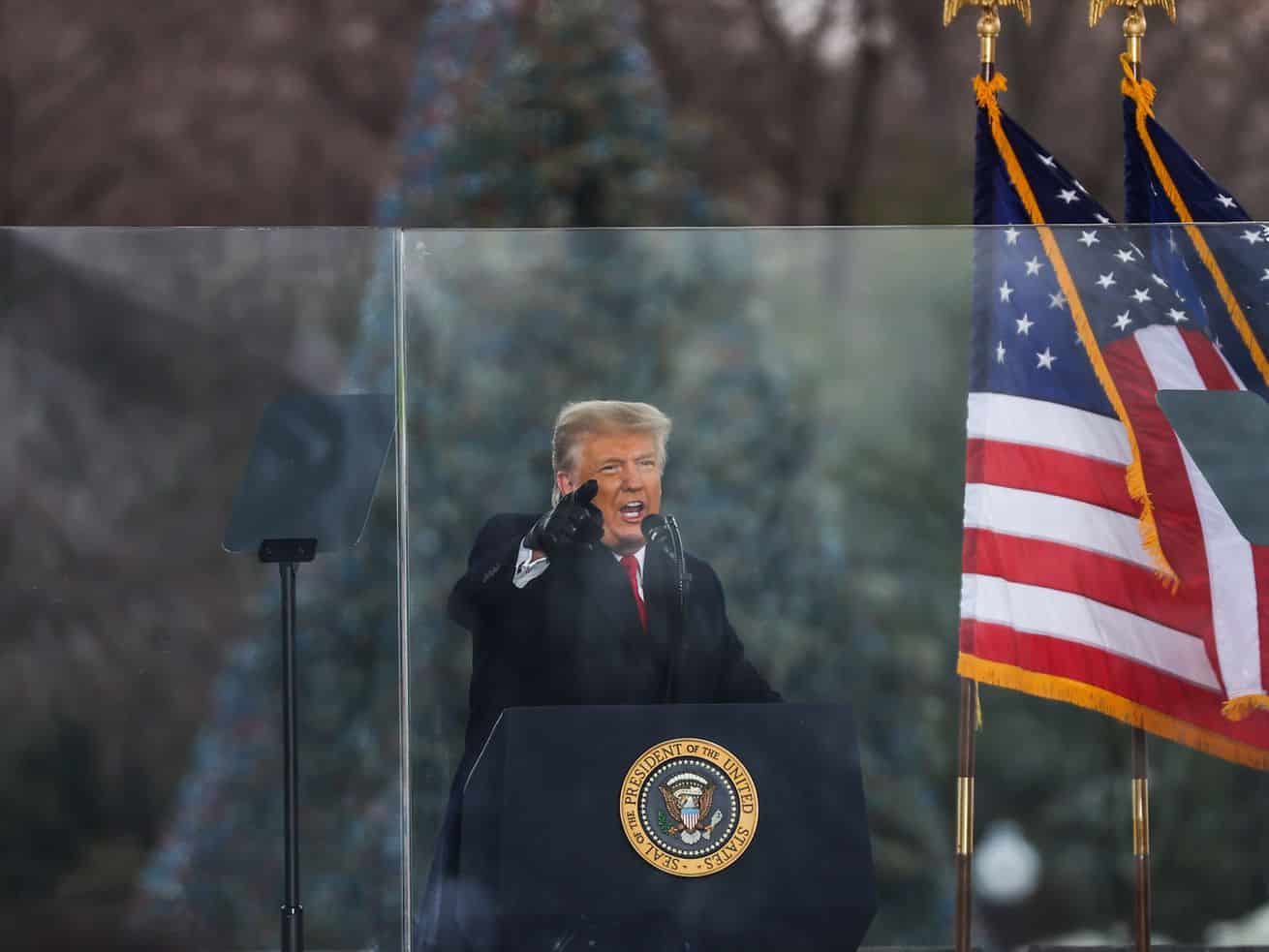 No, Trump does not have a constitutional right to lie with impunity.

Lawyers for former President Donald Trump have filed a 78-page brief arguing that he should not be convicted by the Senate in an impeachment trial that begins Tuesday. Trump is charged with “inciting an insurrection” through various statements that allegedly encouraged the January 6 putsch targeting the US Capitol.

The brief’s primary arguments are constitutional. It claims that the Constitution does not permit an impeachment proceeding against a former official. And the brief also argues that Trump is immune from impeachment because the actions which led to that impeachment are protected by the First Amendment.

The first argument is, at least, not entirely ridiculous. While the majority view among scholars is that a former official may be impeached and convicted by the Senate, there are non-frivolous arguments that a former president is beyond the impeachment power.

The first is that impeachment is, essentially, a human resources matter. The Constitution provides that “Judgment in Cases of Impeachment shall not extend further than to removal from Office, and disqualification to hold and enjoy any Office.” So, with Trump out of office, the only question in his second impeachment trial is whether he should be permanently disqualified from certain federal jobs.

As the Supreme Court explained in Connick v. Myers (1983), “the State’s interests as an employer in regulating the speech of its employees ‘differ significantly from those it possesses in connection with regulation of the speech of the citizenry in general.’” Though the government’s power to discipline employees (or former employees) for aberrant speech is not absolute, it is broad enough to allow Trump to be disqualified from office.

The second reason Trump cannot invoke the First Amendment is that many of the statements he made, which allegedly incited the January 6 attack on the Capitol, are lies. Trump accused Democrats of trying to “steal the election,” and he falsely claimed that he “overwhelmingly” won an election that he lost by over 7 million votes.

As the Supreme Court held in New York Times v. Sullivan (1964), the First Amendment does not protect individuals from defamation suits if they make a false claim “with knowledge that it was false or with reckless disregard of whether it was false or not.” For the reasons explained below, a similar rule should apply to Trump.

Finally, some of Trump’s statements — such as a January 6 speech where he told his supporters to “fight like hell” and that “you’ll never take back our country with weakness. You have to show strength and you have to be strong” — may constitute incitement to imminent illegal action, which is not protected by the Constitution.

The government may discipline its own employees

Although the First Amendment provides some protection to government employees, those protections are much weaker than those afforded to private citizens, at least when the government seeks to fire or otherwise take a job action against an employee.

Imagine, for example, that a public school hires someone to teach algebra, but this teacher refuses to follow the curriculum and instead spends their class time lecturing their students about 16th-century Japanese art. The First Amendment protects a private citizen’s right to speak about Japanese art, but the school district could discipline or even fire this teacher for failing to do their job properly — even though their only offense was to engage in speech that is normally protected by the Constitution.

Moreover, while the First Amendment provides a relatively robust shield against workplace discipline to rank-and-file government employees, the Constitution offers very little protection to senior officials in political jobs. As a private citizen, for example, Secretary of State Tony Blinken is allowed to criticize President Joe Biden’s foreign policy. But as one of Biden’s top lieutenants, Blinken may be fired immediately if he makes a disparaging remark about Biden’s policies.

As the Supreme Court explained in Branti v. Finkel (1980), “if an employee’s private political beliefs would interfere with the discharge of his public duties, his First Amendment rights may be required to yield to the State’s vital interest in maintaining governmental effectiveness and efficiency.”

Thus, Trump’s private political belief that he, and not the lawful winner of the 2020 presidential election, should be president must “yield to the State’s vital interest in maintaining governmental effectiveness and efficiency.”

Trump’s lawyers, for what it’s worth, primarily rely on the Supreme Court’s decision in Bond v. Floyd (1966), which held that the Georgia House of Representatives violated the First Amendment when it prevented state Representative-elect Julian Bond from taking his seat — ostensibly because of statements Bond made criticizing the Vietnam War. (Bond, an important civil rights leader, was one of the first Black representatives elected in Georgia after the passage of the Voting Rights Act of 1965; it’s fairly likely that the real reason he was excluded had less to do with his opinion of the war than the color of his skin.)

The Bond decision is more than a half-century old, and since then we’ve seen a whole line of cases involving First Amendment protections for government employees, including the Branti case. So it’s not entirely clear that Bond remains good law. To the extent that Bond is still valid, however, Trump’s lawyers argue that cases like Branti only apply to appointed political officials — and that Bond provides much more robust protections to elected officials.

Yet even if we accept that elected officials enjoy greater First Amendment protections than political appointees, the Bond case does not help Trump escape impeachment.

Lies enjoy little, if any, protection under the First Amendment.

But the Supreme Court tossed out that verdict in New York Times v. Sullivan (1964), a seminal decision holding that the First Amendment provides strong protections against defamation lawsuits that threaten free speech. Yet, while these protections are quite robust, especially when a defamation suit involves statements about a public figure that regard a matter of public concern, they are not unlimited.

At the very least, someone can still successfully be sued for defamation if they make a false statement “with knowledge that it was false or with reckless disregard of whether it was false or not,” according to New York Times.

Under Bond, “the New York Times principle” was “extended to statements by a legislator.”

Two years after Bond, the Court handed down its decision in Pickering v. Board of Education of Township High School District (1968), which established the modern framework governing First Amendment suits by government employees. Pickering involved a public school teacher, not an elected official, but it provides additional support for the view that government employees do not have a First Amendment right to lie.

In Pickering, the Court held that “absent proof of false statements knowingly or recklessly made by him, a teacher’s exercise of his right to speak on issues of public importance may not furnish the basis for his dismissal from public employment.”

New York Times, Bond, and Pickering, in other words, all suggest that a government employee’s First Amendment rights — regardless of whether that employee is elected — do not include a right to knowingly make false statements, or to make statements with reckless disregard as to whether they are true or not.

So when Trump riled up his supporters by falsely claiming that the 2020 election was stolen from him, he was not protected by the First Amendment.

Trump’s January 6 speech may not be protected by the Constitution.

In Brandenburg v. Ohio (1969), the Supreme Court held that “the constitutional guarantees of free speech and free press do not permit a State to forbid or proscribe advocacy of the use of force or of law violation except where such advocacy is directed to inciting or producing imminent lawless action and is likely to incite or produce such action.”

Thus, while speakers, including Trump, are protected even if they advocate illegal actions, this protection has limits. If such advocacy is made with the intent to incite “imminent lawless action,” and if such action is likely to result from a person’s speech, then that speech is not protected by the First Amendment.

Brandenburg sets a high bar for incitement prosecutions. But Trump’s statements immediately before the January 6 putsch were so egregious that they may overcome this high bar. In a speech that he gave right before his supporters attacked the Capitol, Trump told them that “if you don’t fight like hell, you’re not going to have a country anymore,” that “they need to take back our country,” and that they can’t show “weakness” and have to “be strong.”

Although Trump tried to protect himself by stating that he was sure that the crowd would “peacefully” march to the Capitol, that does not alter the fact that he was inciting the crowd to forcibly stop Congress from counting the certified electoral votes once they got there.

Trump thus clearly incited lawless action (obstructing the operations of Congress is a crime) that was imminent (right after the speech, a short walk away). That he wanted to incite such lawless action is confirmed by reporting that for hours he watched the Capitol attack with pleasure and did not take any steps to stop it by calling out the National Guard or by urging his supporters to stand down.

Again, it’s far from clear that Trump could be prosecuted in a criminal court for his statements — Brandenburg makes it extraordinarily difficult for prosecutors to win such cases. But that’s not the issue in Trump’s impeachment trial.

The issue in Trump’s impeachment trial is whether, given the fact that the government has broad authority to make human resources decisions under the First Amendment, Congress may conclude that Trump’s statements were so beyond the pale that he should be disqualified from holding high federal office in the future.

Setting aside these legal flaws in Trump’s First Amendment argument, there’s also a profound practical reason public officials should be subject to impeachment, even if they’ve done nothing more than give an illiberal or anti-democratic speech.

Imagine that someday in the future, a new president is elected after campaigning on a fairly mainstream platform. Then, in the president’s inaugural address, they reveal that the entire campaign was a charade: “I am a great admirer of Nazi Germany,” the new president declares in their inaugural address, “and I plan to use my presidency to build a Fourth Reich.”

Should Congress really have to wait until this Nazi president takes some affirmative step to implement this agenda before they can be impeached and removed from office?

As George Mason University law professor Ilya Somin writes, the implication of Trump’s argument that he cannot be impeached for his speech is that “Congress could not impeach and remove a president who openly proclaimed his intention to turn the United States into a communist or fascist dictatorship,” because “speech advocating despotism is protected against criminal punishment by the First Amendment if uttered by a private citizen.”

But Trump is wrong that he is protected by the First Amendment. The government has far more leeway when it makes personnel decisions than it does when it regulates speech by private citizens. And even if Trump had simply spoken as a private citizen, there is a strong argument that his conduct was so egregious that it could be prosecuted as incitement.

How to watch all 9 of the 2020 Oscars Best Picture nominees
Israeli PM Benjamin Netanyahu could be indicted. Here’s what you need to know.
Don’t ask what Martin Luther King Jr. would do today and then ignore his real message
Why people are mad about a list of Trump donors online
Watch Lt. Col. Alexander Vindman’s powerful opening statement in the impeachment hearings
How Oprah Winfrey became our interviewer in chief